Do you want to hike the Beehive trail? This is one of Acadia National Park’s most classic and popular hikes. But it’s not for the faint of heart or those afraid of heights. This hike is exposed and you will be using granite boulders, ladders, and iron rungs to haul yourself up the trail. But I love that I have to scramble my way to the top. It’s also one of my favorites because I can do it in the morning in just a couple of hours and be rewarded with amazing views. And I think it’s one of the easiest hikes to work into your schedule as you drive the Park Loop Road.

This hike can seem daunting though. I remember my first glimpse of the hike as we followed the Park Loop Road in Acadia National Park. It was several years ago during our first trip to Bar Harbor. I was looking out the window when I spotted the trail winding up a cliff. I don’t know if it was the Beehive trail or the Precipice trail that day, but I do remember what I said:

“Who the hell would want to hike that?!”

Fast forward four years and the Beehive was the first trail I wanted to hike in Acadia National Park.

Why is the Beehive trail considered tough?

So what’s the Beehive’s call to fame? Sure it’s considered one of the more strenuous trails in the park (even though it’s not that long). But the reason for its popularity are its iron rungs.

You see, the Beehive trail ascends the front face of the Beehive mountain. There’s a lot of scrambling and climbing, and iron rungs have been bolted into the rock face to assist you. Cause you know, you are hiking a cliff face of sorts.

As soon as I read about these iron rungs, they called to me. I knew I had to do it.

But even if the idea of scrambling up the trail doesn’t appeal to you, the amazing views that await you at the top certainly will. Sand Beach and Frenchman’s Bay stretch out before you. There are several different vantage points along the summit and it’s all beautiful.

You do not want to miss this. 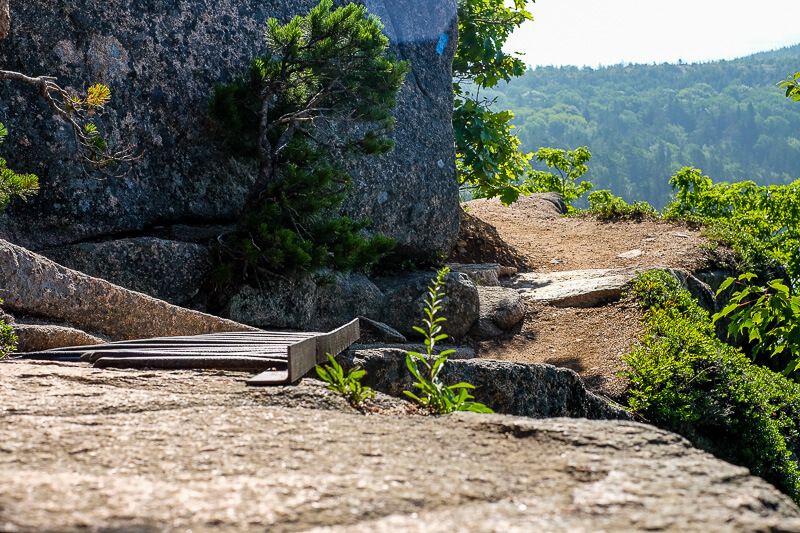 I would wake up early. The first time I hiked this, I was out the door by 8:15am. And I had actually hoped to be out by 7:30am, but I have this thing against alarm clocks when I’m traveling. Long story short, I hate them.

But by 8:30am, I was parked at the Sand Beach parking lot and heading for the trailhead. Luckily it’s quite easy to get here from Bar Harbor. Acadia National Park sits incredibly close to this village so I almost always use it as my base.

The first 100 yards of the Beehive trail were actually the hardest in my opinion. The trail follows what looks like an old riverbed up the hillside, but you don’t walk on the ground. Instead you have to hop from rock to rock. And these aren’t big boulders. Nope. They are much smaller. 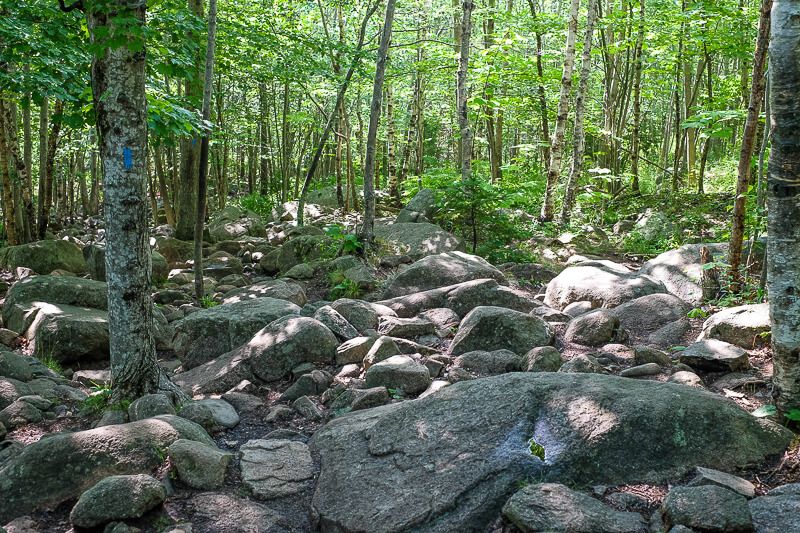 I treaded carefully, not wanting to slip and twist an ankle in the first 5 minutes.

But boom! I survived the rocks and the trail turned left up the hill and then wound up a large granite face covered in brush and small trees. Keeping my eye on the blue trail markers, I kept worrying I was going to miss the first fork in the trail.

I shouldn’t have worried. The trail sign is literally in the center of the trail. It looks like a small monument. 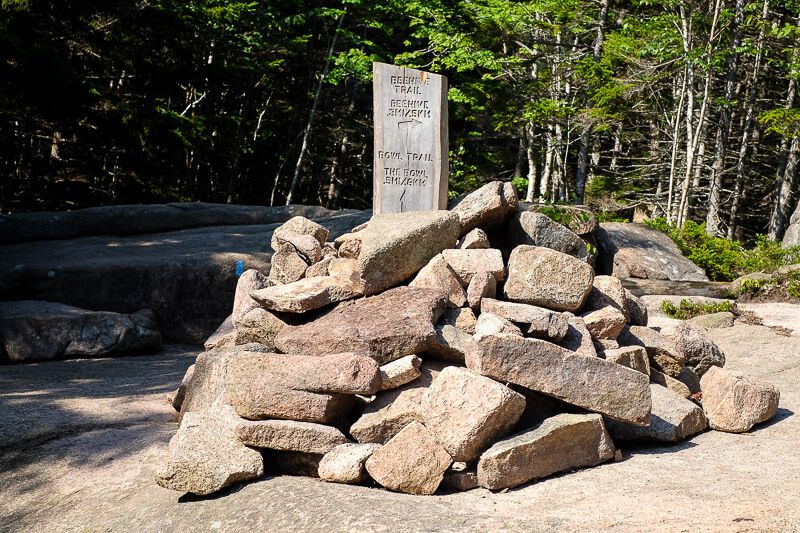 At the split, I headed right towards the Beehive trail and started to make my way upwards. And here was where things started to get interesting.

Lots of clambering, scrambling, climbing, and shuffling as I made my way up the iron rungs and boulders. I edged my way across an iron grate and a wooden plank bridge. 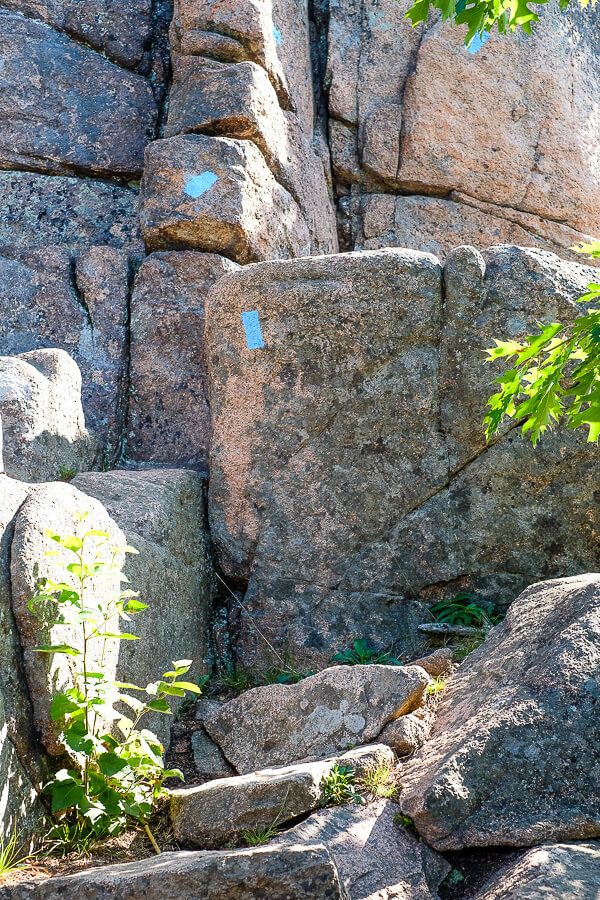 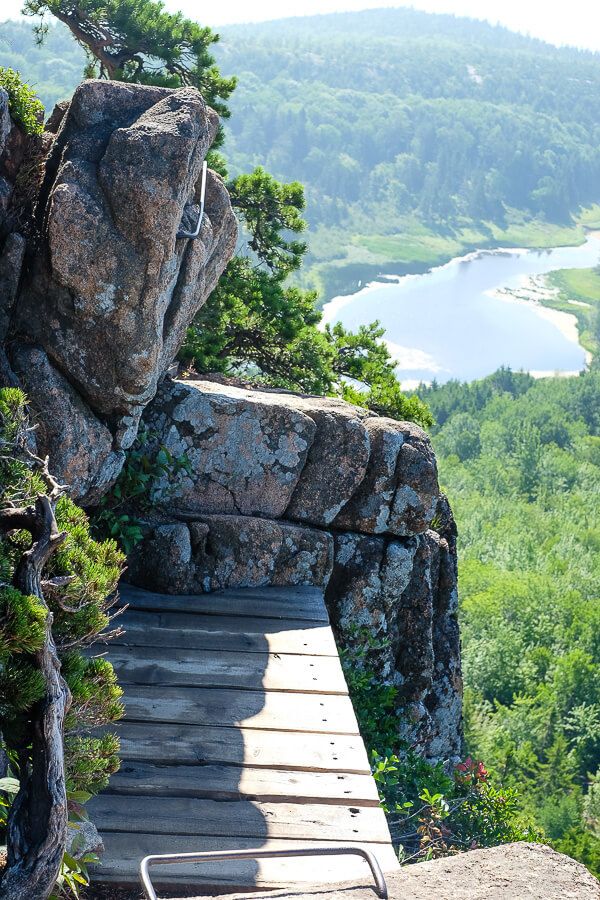 And the trail kept winding up and up. And with each climb, each turn upwards, the tree and brush cover around me became sparser and sparser until it was gone all together.

But I was never nervous. Before I started, I was afraid that my (occasional) fear of heights would kick in. But nope. I was never scared. Instead, I was thrilled.

I felt like a kid in a playground as I made my way up the trail. 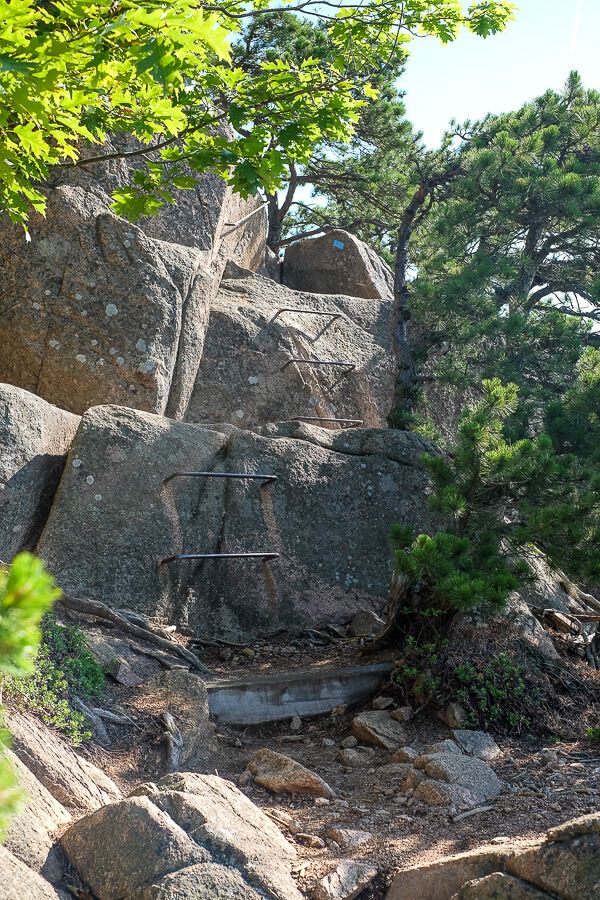 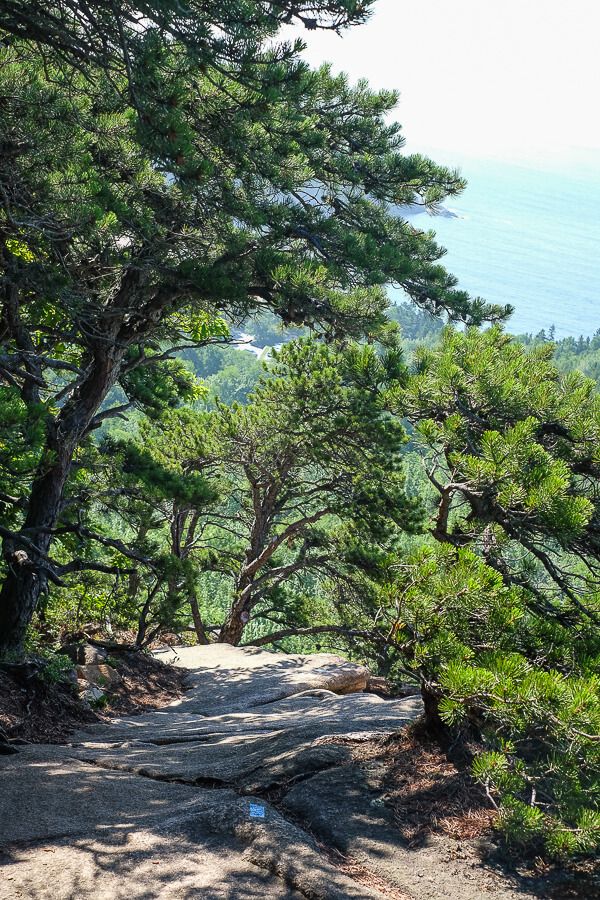 And each time I looked down, I wasn’t staring at the ground or the cliff beneath me. Nope, I was entranced by the view. Sand Beach stretched out below me and at every turn, at every open spot, the view was incredible.

I couldn’t keep the smile off my face as I climbed, searching for the blue markers as I clambered upwards over the rocks and rungs. 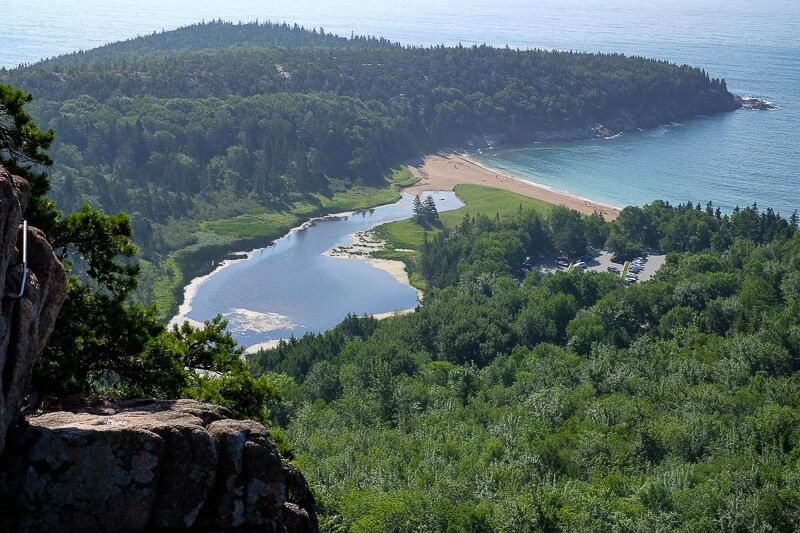 And then, I couldn’t believe it, the hike was over. Getting to the top took a lot less time than I thought it would. Sure I was sweaty and winded, but I wasn’t dead. In fact, I was a little sad it was over so soon.

After you reach the top, its now time to sit back and enjoy the view. I certainly did (as well as taking just a few photos of my victory).

But as the number of people emerging over the top of the trail began to increase drastically, I knew it was time to continue on. And so I headed further up the trail, towards the actual Beehive summit.

In case you didn’t know (like I did the first time), the Beehive trail actually has TWO viewpoints. There’s the first, right at the top of the climb, looking down over Sand Beach. But then there’s the other, further up the trail and right at the actual Beehive summit.

This view points more north, and I think I felt my jaw drop when I stumbled upon it. This was my favorite. 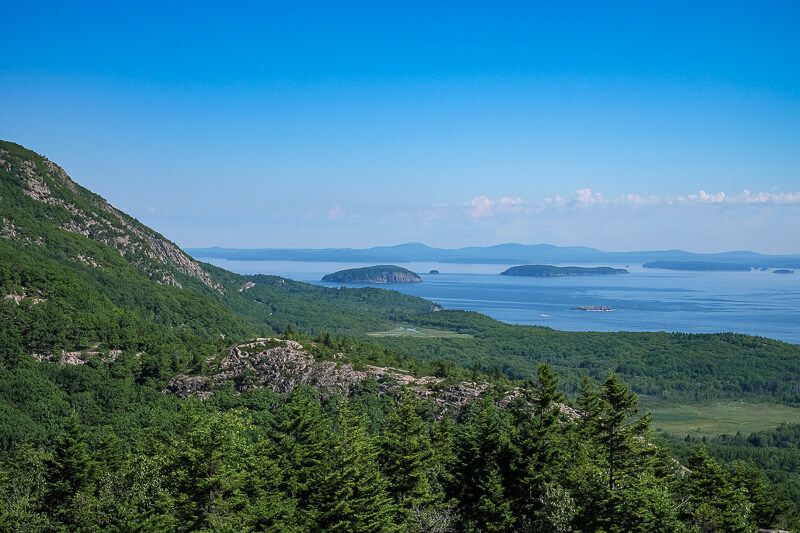 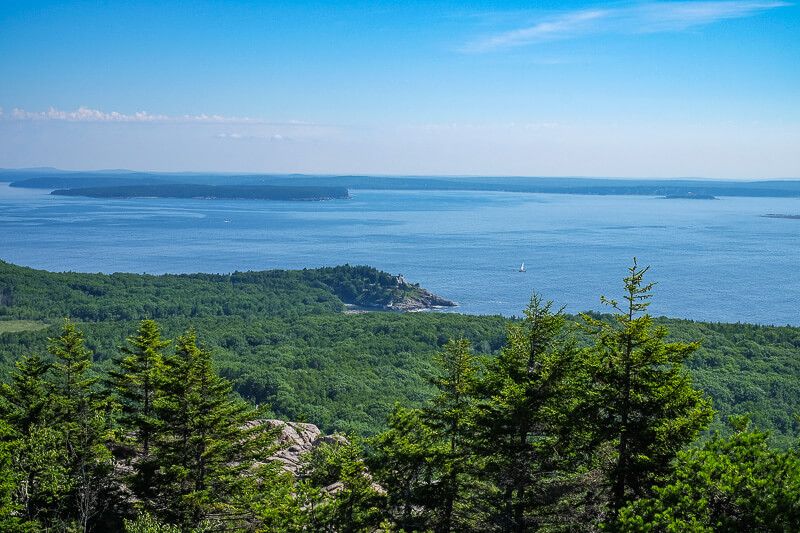 After simply staring at the bay for several minutes I knew it was time to head down towards The Bowl. I reached this small pond in only about 10 minutes. Staring at the cool water, I briefly thought about jumping in when I overheard one of the families nearby say the word “leeches.” 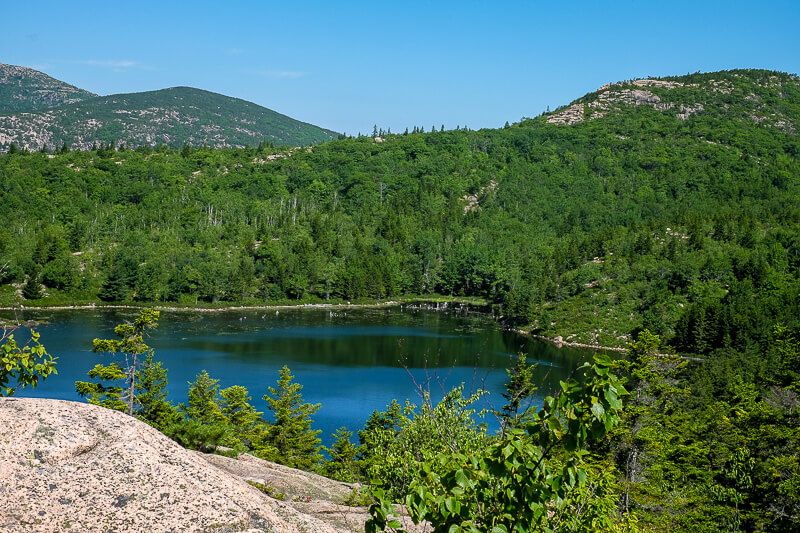 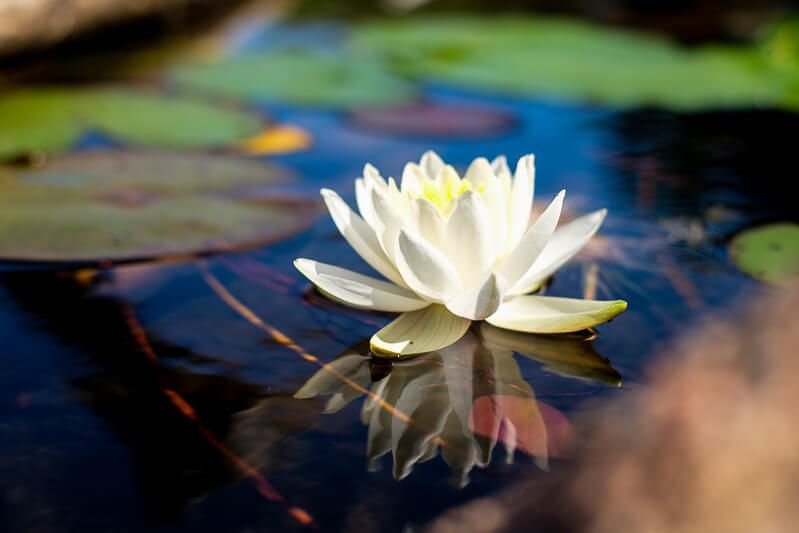 After another quick break, it was back towards Sand Beach. I passed several junctions in the trail but it was easy to follow the markers. And I found myself at the first fork in the trail rather quickly. Except this time I was coming from the other direction.

Quick tip: Look up when you reach the pile of rocks again. This spot has one of the best views of the Beehive.

Then it was back down over the rocky riverbed and, before I knew it, I was at the Sand Beach parking lot. Looking back the way I had come, I was surprised with how fast I had completed the Beehive loop. 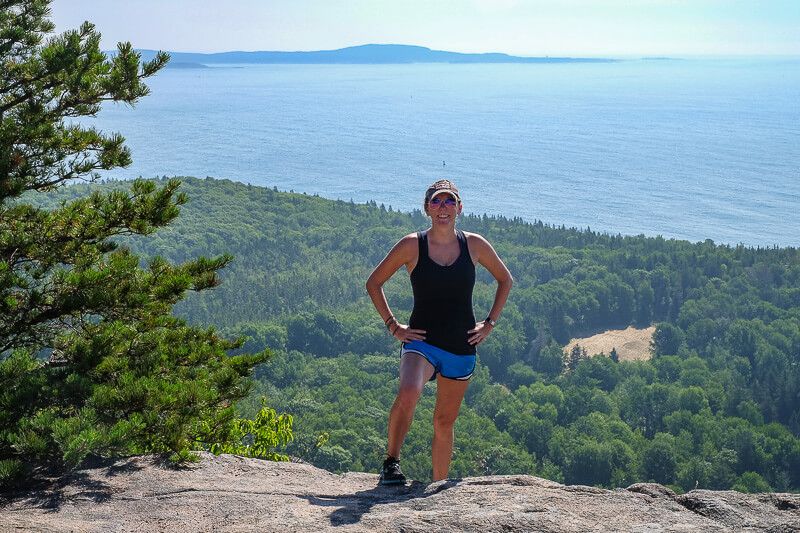 The Beehive ended up being the only hike I did that first trip. I spent a lot more time outdoors, but I never got back on a trail. Something I regret.

Originally, I had planned to use the Beehive trail as warmup for the Precipice (its taller counterpart). But the Precipice is actually close for most of the summer for Peregrine Falcon nesting. And though I did hike the Precipice on my next visit to Acadia National Park, the Beehive is still one of my favorites.

Read Next: Hiking the Precipice Trail 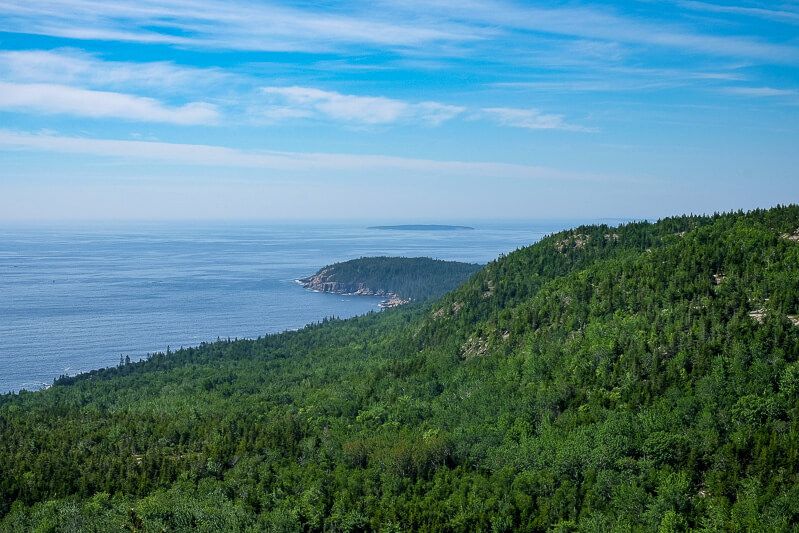 Thinking back to my very first visit to Bar Harbor, I never would have guessed that in four years time I would want to climb that mountain. That I would wake up early just to do it before the crowds set in.

Now I know that says a bit about me and how I’ve changed over the years (am I now an outdoorsy type?). But standing at the top of the trail, sweaty and winded but exhilarated, I realized it’s probably a change for the better. 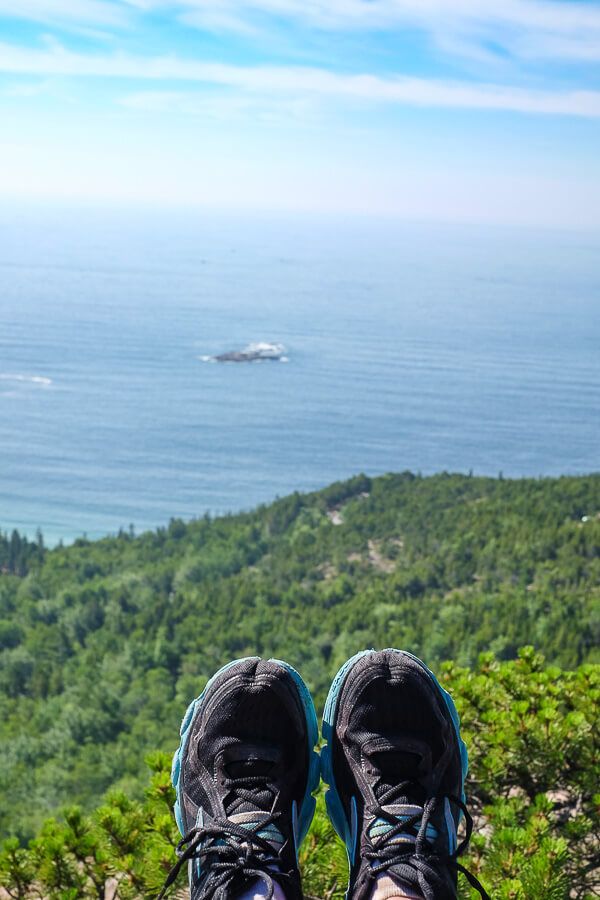 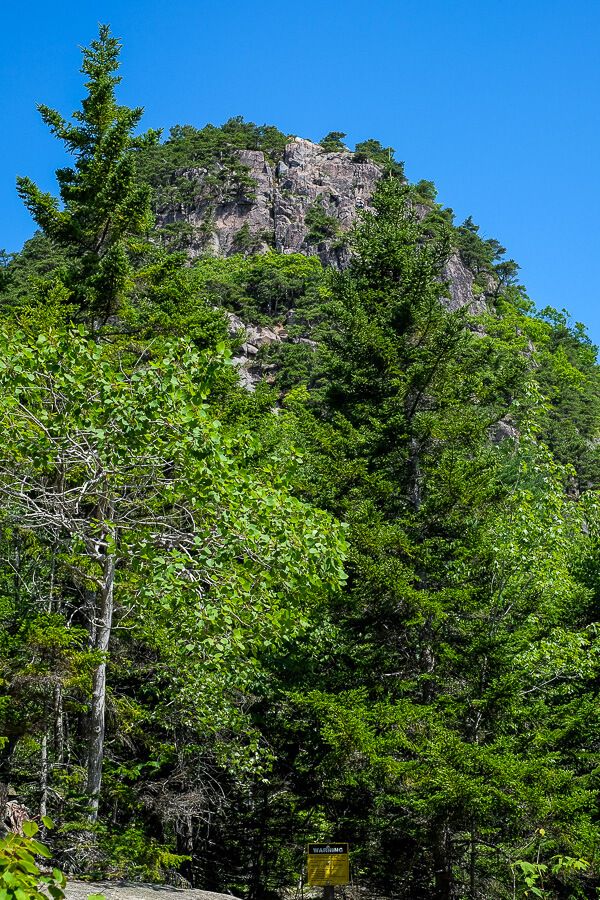 Tips for Hiking the Beehive Trail

Start early in the morning. I reached the top just a little after 9am, and the number of hikers was steadily growing. An hour later and I passed several groups headed for the trail as I made my way towards Sand Beach. And by 11:30am, people were waiting in line to go up the Beehive.

Don’t hike down. Please, just don’t. It’s annoying. Passing is near impossible. If you don’t want to hike all the way down to The Bowl, there’s a short connector trail right past the summit that cuts off the pond, and it will take you right back to the start quickly (see my map below). Plus you won’t accidentally push someone off a mountain.

Water. This hike and its views are exposed. Though it’s short, you’ll definitely want to take some water.

Don’t go if you’re afraid of heights. Please don’t. This is not a hike for the faint of heart. If you want the views at the top without freezing in fear halfway up, then go up the backside. See the map below.

Buy a map if you need to. It’s important to note that many of the trails in the park intersect with each other. The route I used is below, but if you want your own map, I love this waterproof one here. 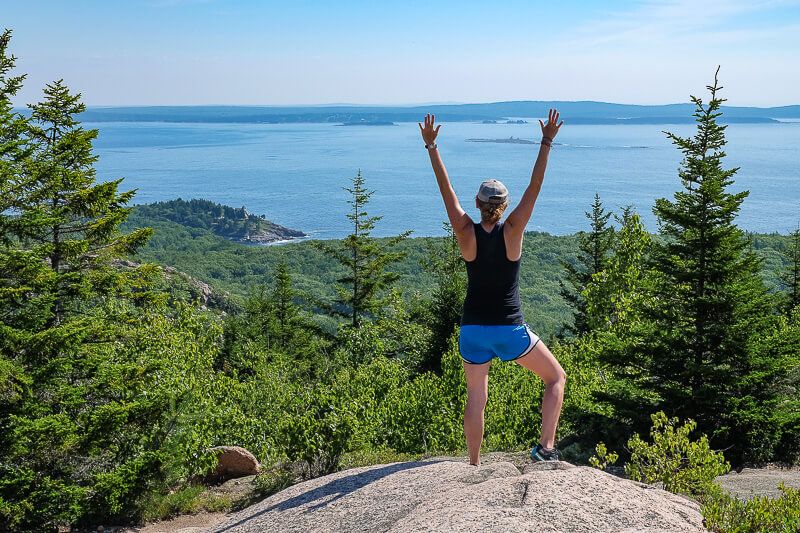 The highlighted route in blue below was the path I took. After hiking up the face of the Beehive, I made my way to The Bowl before heading back. However, if you are short on time, you can cut off The Bowl. Just hike a little bit past the actual Beehive summit, and you’ll reach a connector trail that will loop you back around to the beginning quite quickly (this connector trail is highlighted in green). 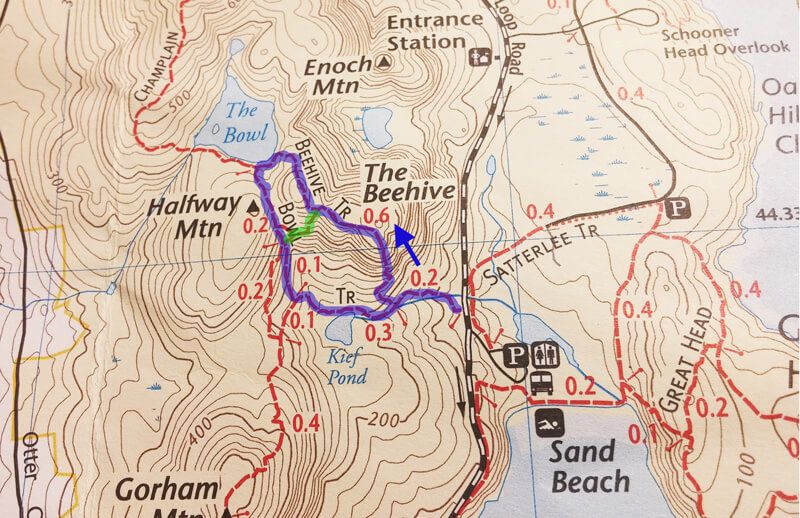 Getting There. You can find the start of the Beehive trail across from the entrance to Sand Beach (along the Park Loop road). Google even knows where it is. But parking can be tricky. If you go early, you can easily find a spot in the Sand Beach parking lot. If you aren’t a morning person, you’ll have to find a spot along the road.

Don’t want to drive? No problem! You can catch a ride on the free Island Explorer. Buses number 3 (Sand Beach & Blackwoods) and 4 (Loop Road) both stop at the Sand Beach parking lot. Check out the Island Explorer site for information on times and other routes.

Trailhead. You’ll actually start on The Bowl trail (across from the Sand Beach parking lot), and after .2 or so miles, you’ll reach the first fork in the trail. Go right to climb the Beehive trail. Continue straight and you can make your way to The Bowl or up the backside to the Beehive summit.

Time. I stopped often for photos (including probably 30+ minutes at the top) and easily finished in under 3 hours. If you’re in shape and hit the trail early, you could do the loop in less than two hours. However, if you go later in the day, you’ll probably have to wait in lines to go up.

Cost. It doesn’t cost money to hike the Beehive, but you will need a pass to enter Acadia National Park. I bought a weeklong pass for $25.

Would you want to hike the Beehive trail? 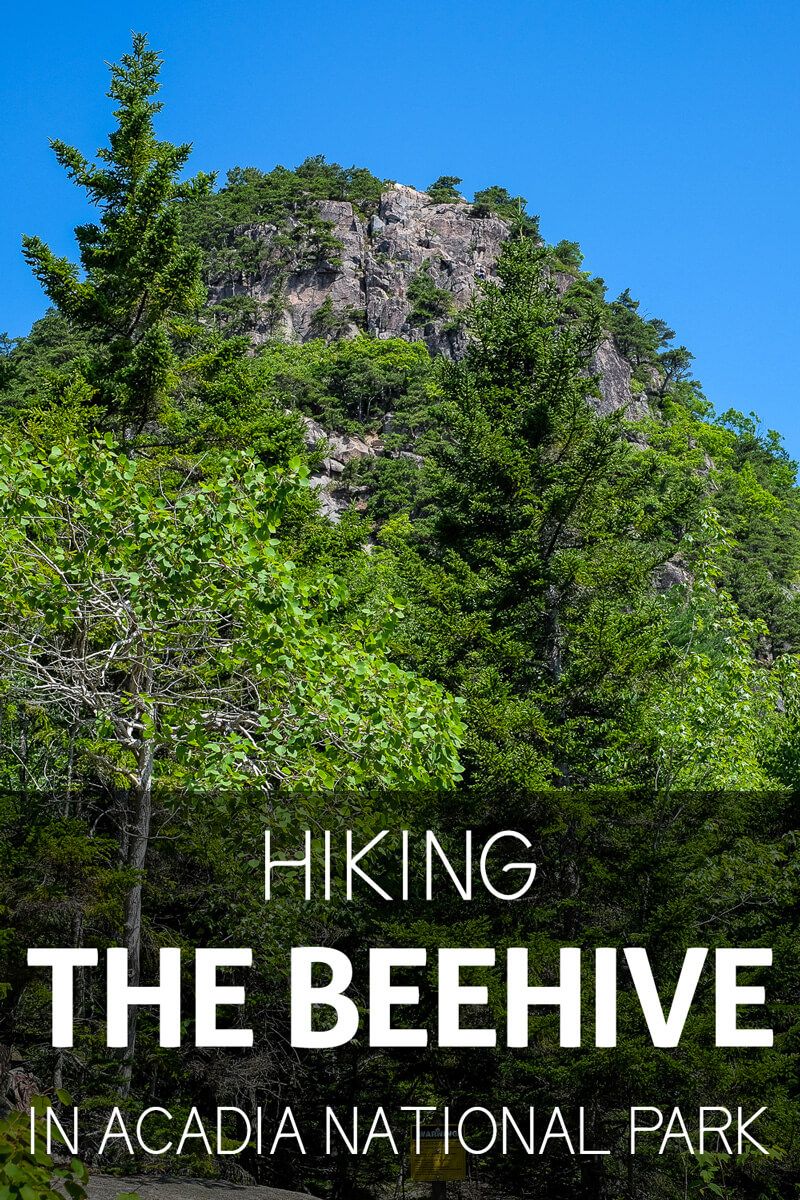 20 Photos Of Bar Harbor To Inspire You To Visit