When my family decided to go to Bar Harbor in September, I knew what was at the top of my list – The Precipice Trail. A towering cliff near the beginning of the Park Loop Road, this is not for the faint of heart. And why? Well because the trail winds its way up the face of that cliff. And as my Dad liked to say, Those people are insane! But for me? I couldn’t wait to tackle it.

Now the year before I had done the Beehive, aka the baby brother to the Precipice. And it was there I got my first taste of what an iron-rung trail was like. (Hint – it contains lots of iron rungs and ladders.) So I knew what I was getting into.

But the Precipice Trail is longer and steeper. And, in my opinion, is one of the hardest and most difficult hikes in Acadia National Park. 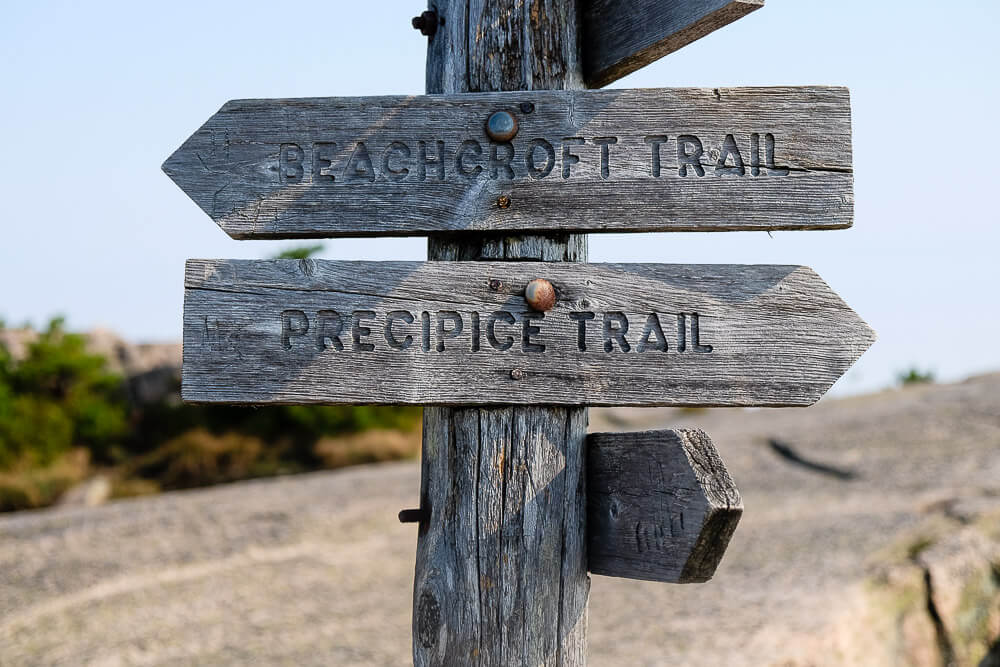 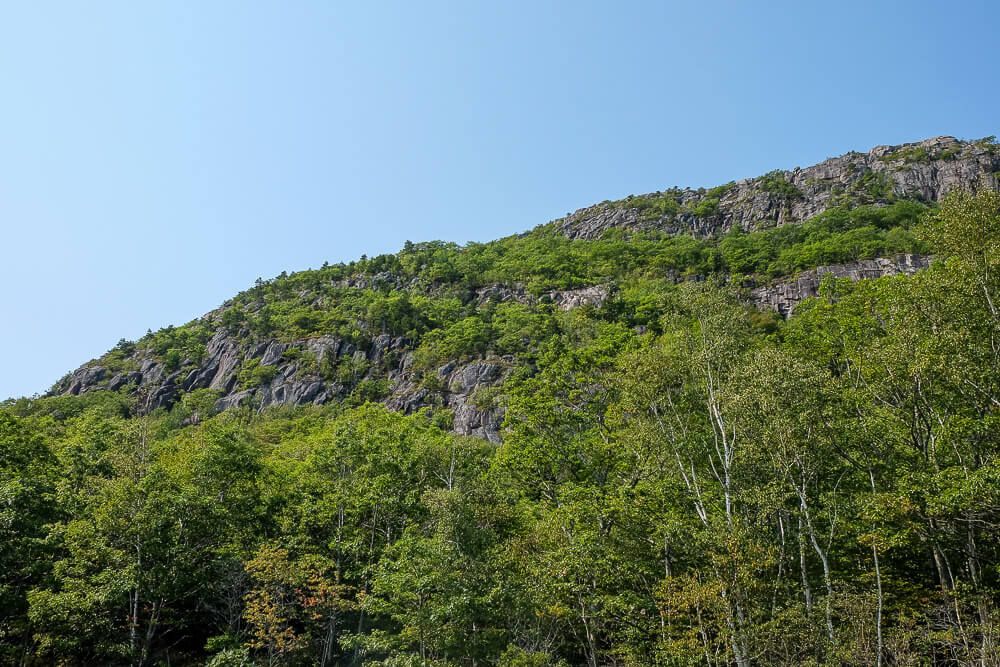 But what are the details? The Precipice Trail makes its way up the east face of Champlain Mountain. From the parking lot to the summit it’s only about a mile, but you’ll gain over 800 feet in elevation. And you should definitely not come down the Precipice Trail. Oh no. Some guides will tell you to come back via the Orange & Black Path. But I recommend taking the Orange & Black to the road. So much faster. More on this below.

Since the trail was at the top of my list, I knew I had to tackle it asap. So on my first morning, I woke up at 7am so that I could be on the trail by 8am. An early morning for me, but definitely recommended.

Unfortunately it was incredibly foggy that morning. (In fact our whole trip was like this, only a couple of days weren’t plagued by fog.) And as we started out that morning, I was a little worried. Would we even be able to see anything? 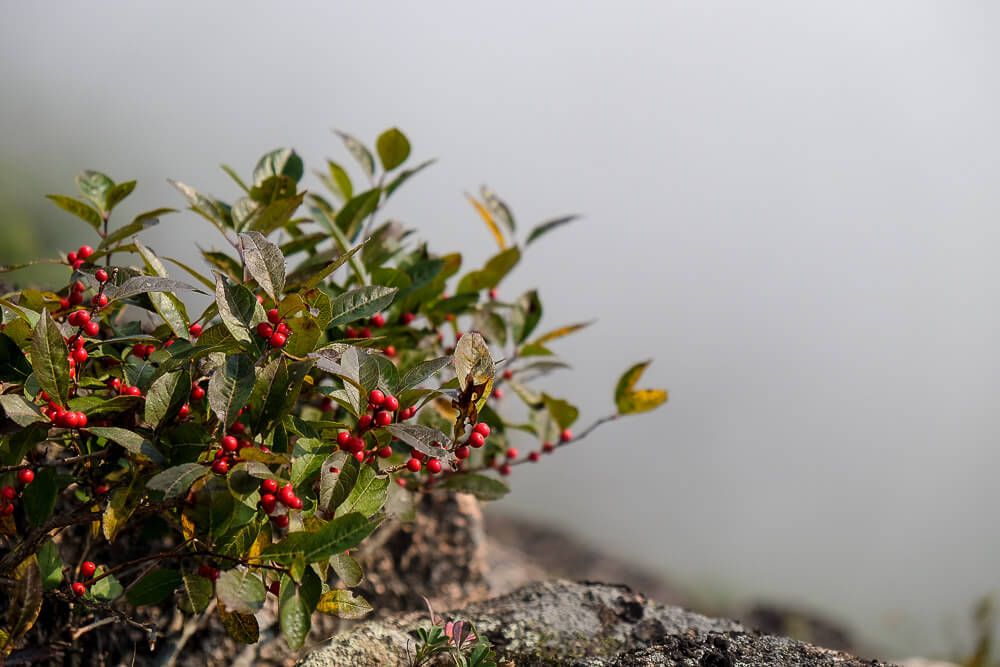 Rolling up to the trail, my fears were confirmed. You couldn’t even see the cliff from the parking lot. There was only fog.

But shouldering my pack, I headed up. I had been looking forward to this hike for so long, and I was not about to postpone it now.

Looking back, in some ways, that fog was also a blessing. Because my sister was with me. My sister who is a tad afraid of heights. And had she been able to see the cliff, she may not have climbed up with me.

The beginning of the trail immediately showed me the difference between this one and the Beehive. Giant boulders made up our path and we had to make our way over them. And sometimes even under them.

And so we climbed. And climbed.

Also as a note this trail is not made for short people. As someone who is close to six feet tall (especially in my hiking boots), I had no trouble with the trail. But my 5 foot 3 sister sometimes struggled to reach the iron rungs. And she often had to come up with inventive ways to pull herself up.

The only downside is that as we climbed, the fog didn’t seem to be going anywhere at first. It still clung to the air around us. Every viewpoint we reached simply looked out into the dreary cloud.

So instead I focused my attention on the mountain beside me. 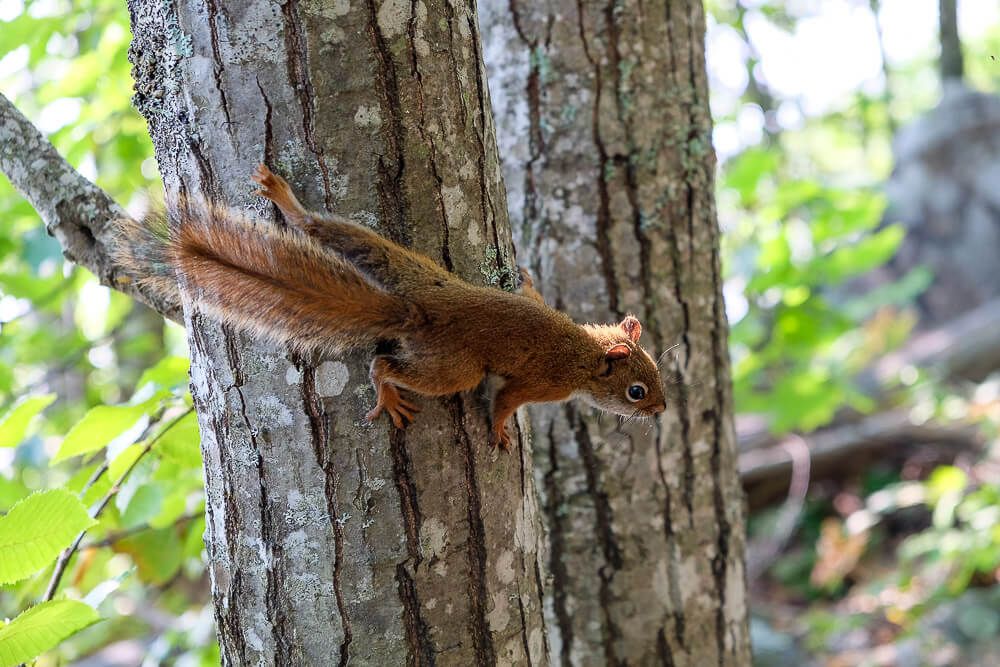 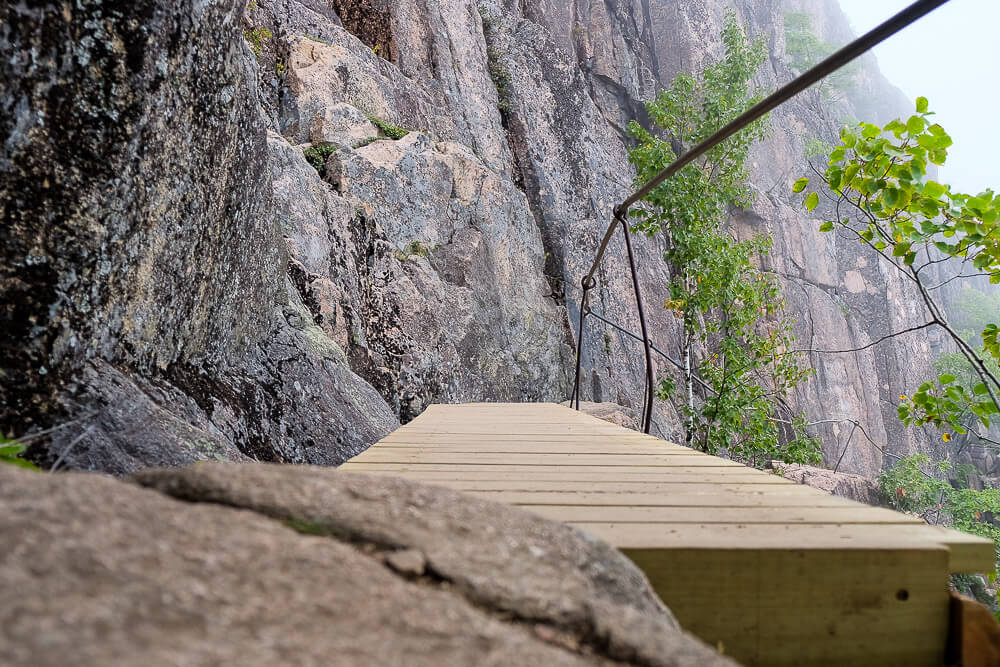 Soon we crossed over the wooden bridge and reached the first junction in the trail. This is where the Orange & Black path joins up with the Precipice Trail. We continued to the left to stay on the Precipice.

This was also where the real fun began.

The few iron rungs in the first part of the trail were nothing for what was next. This was where the true ascent started.

Iron rungs and ladders were now everywhere. Each climb upwards (or even along the cliff edge) were accompanied by them.

It was also in this second half that the sun appeared. Yes we had basically climbed out of the fog. And the mountain above us began to peek through the mist. It was incredibly beautiful. 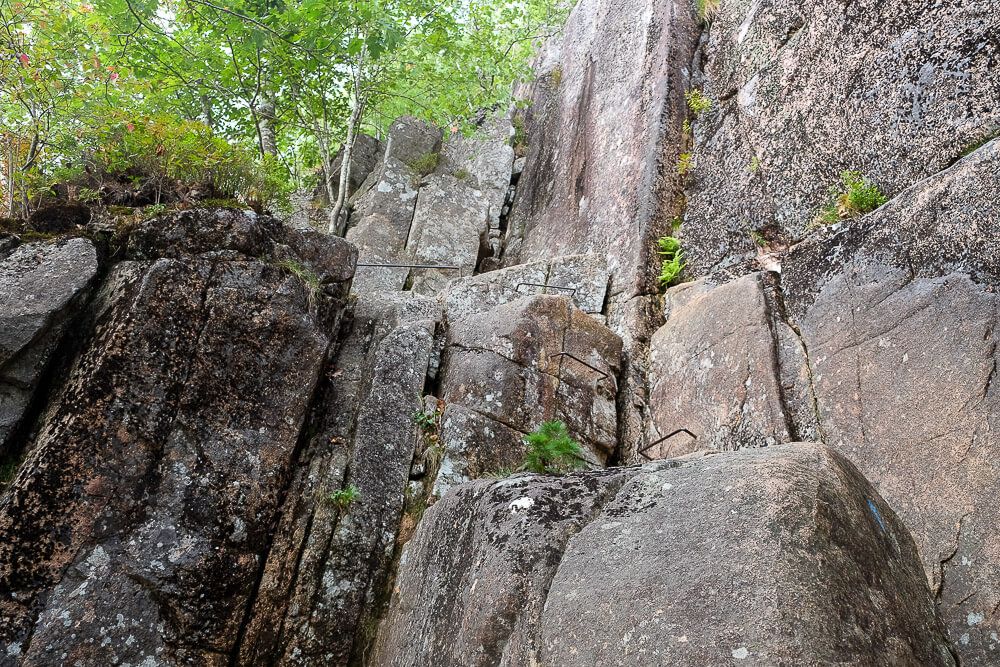 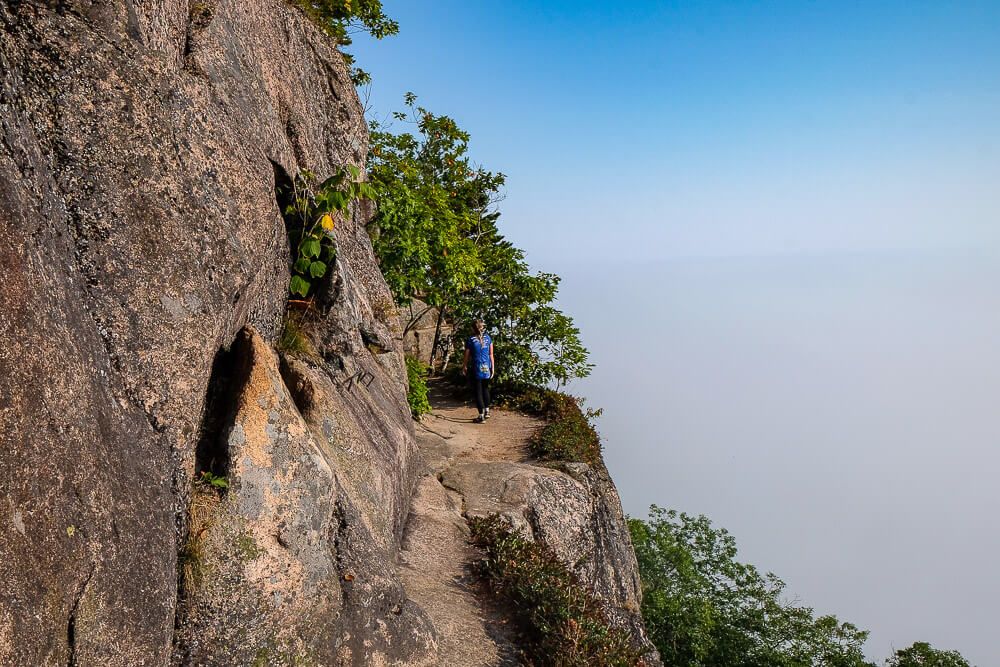 I often found myself just pausing and staring out at the cliff around me. The sun sparkled off the rocks and illuminated the mountain. While at the same time, the fog still hugged the ground and ocean below me. It was kind of crazy and beautiful.

The real iron-rung fun began with the first difficult section. A shimmy along a rock to a 7-rung ladder and then up another standard ladder. It was here that my sister’s eyes widened. And so I let her take the lead and set the pace. While I stayed behind and gladly snapped pictures along the way.

After this it seemed to be iron rungs and cliff edges the rest of the time.

Like with the Beehive, I felt like a kid in a playground. Climbing, scrambling, feeling a bit of thrill as I made my way higher and higher. I absolutely loved it. 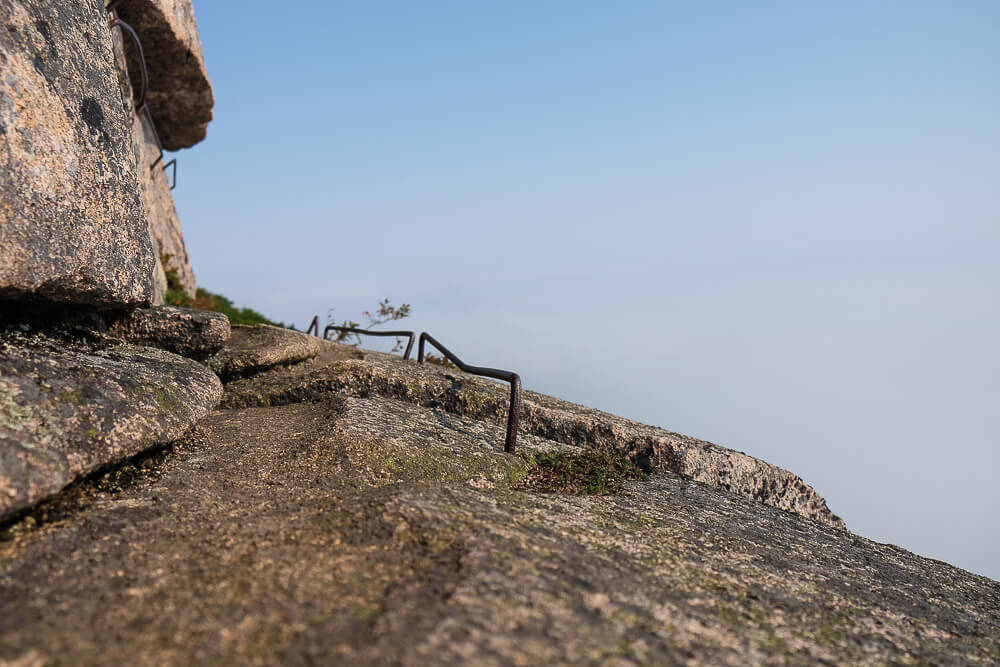 But before I knew it, I was there. I summited the last climb and appeared out at the top (or just about the top – the summit is about another 100 feet or so down the trail).

Looking back to the east I felt a small pang of disappointment. The amazing view that I was sure was there was still plagued by fog. Only white spread to the horizon.

So we headed towards the summit. A small marker marked our triumph, and I was glad to see that the clouds that hung low behind us didn’t obscure the view in every direction. Cadillac mountain stood above the retreating fog. 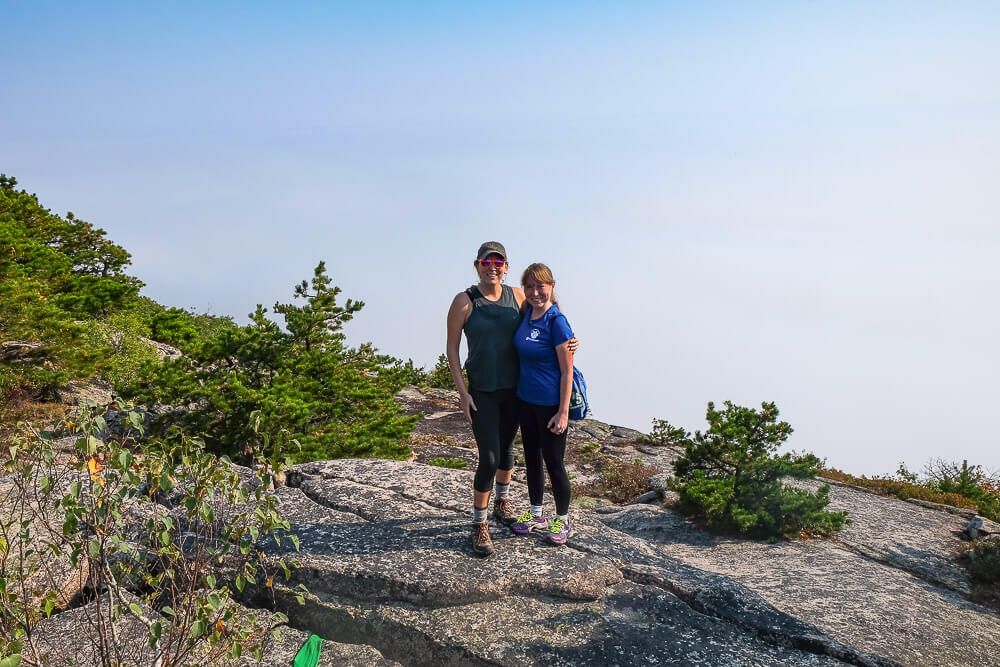 The summit was also the intersection of several trails, and as more people joined us on the summit, my sister and I made our way down the North Ridge Trail.

And so we descended back into the fog, marveling at the way the clouds seemed to crash against the hillside. Concealing and then revealing the mountain above us.

A few of the guides I had read mentioned to head right and back to the Precipice Trail and then down. But we had already spent several hours on the trail, my feet were hurting, I was getting hungry, and clambering down over those boulders again didn’t seem like a ton of fun. 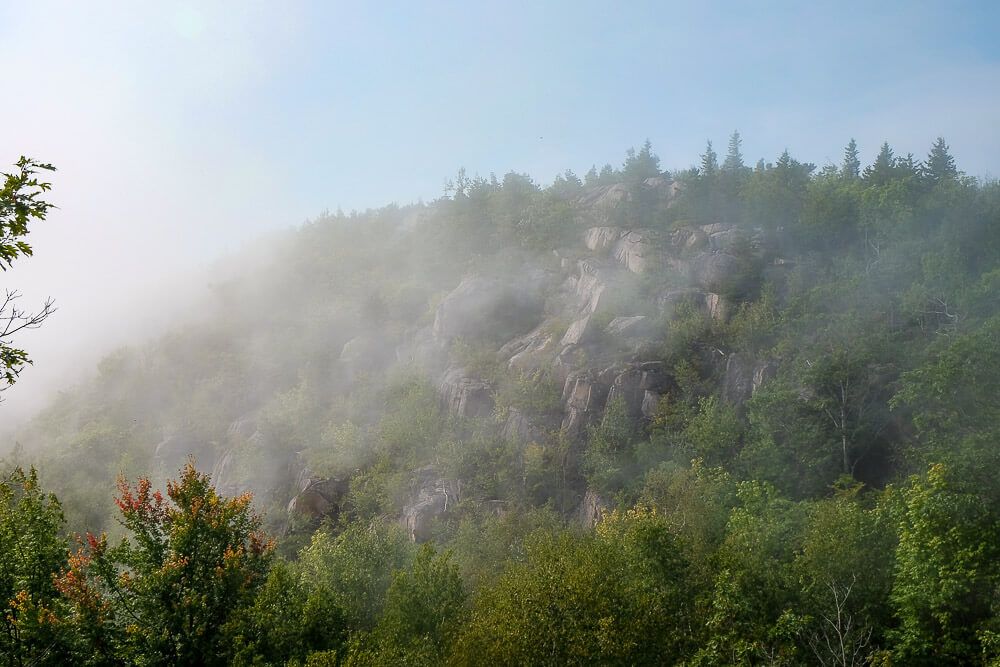 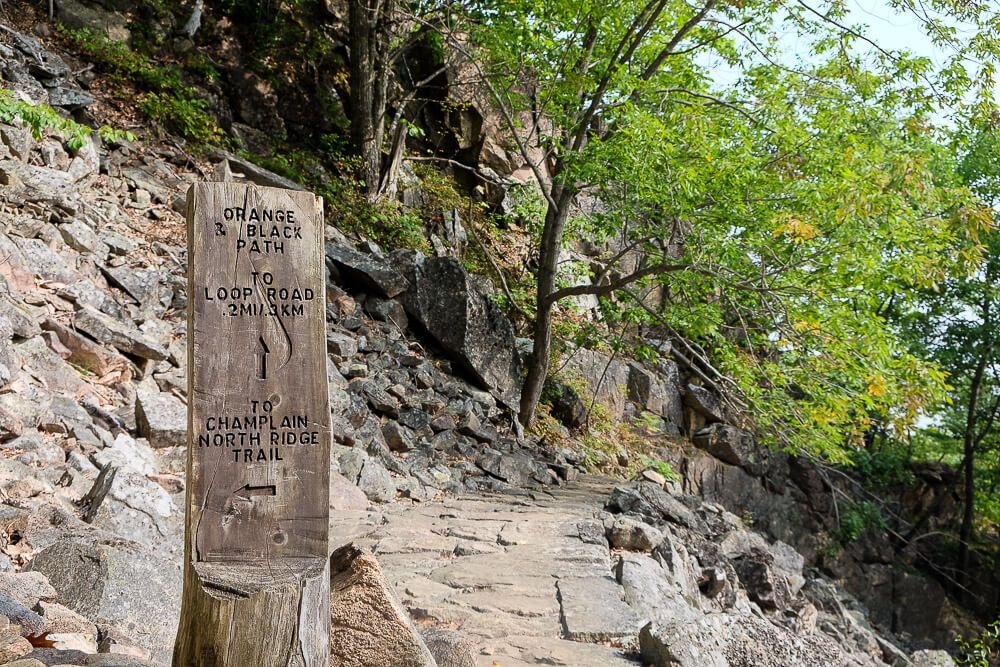 So we headed towards the road and reached it easily. In 10 minutes we were back in the parking lot.

Looking back up at the mountain above, the fog had lifted from the cliff above us. Though it still hugged the ocean behind us, we at last had a clear view of the mountain.

I had conquered the Precipice.

Read Next: Hiking the Beehive Trail in Acadia National Park 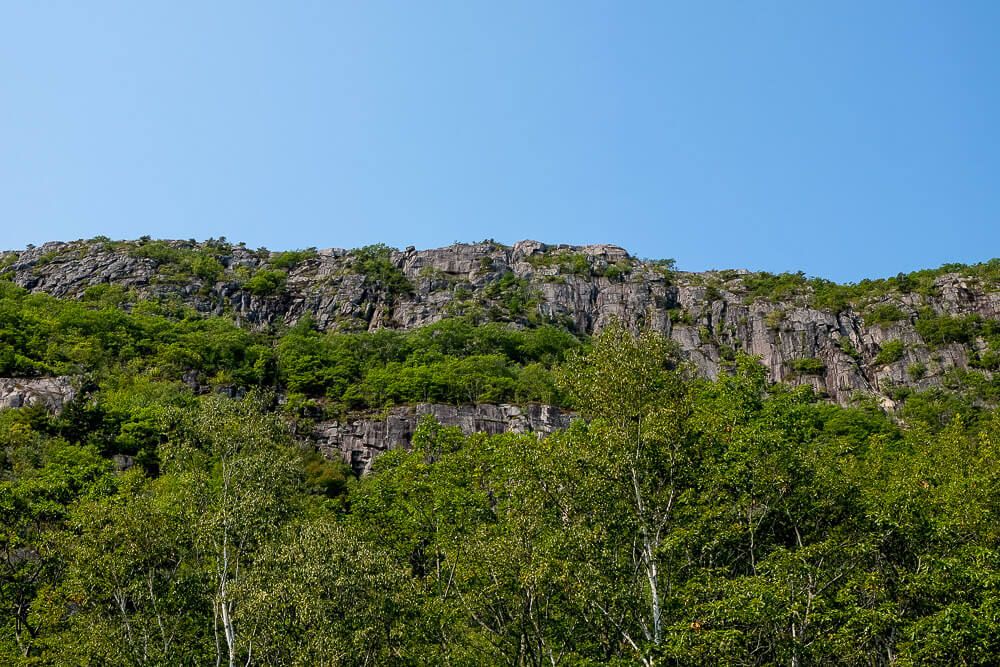 Tips for Hiking the Precipice Trail

Start early in the morning. We were hiking by 8am and the total loop took us about 3 hours. I did stop often to take pictures but this is a tough climb. I would go early so you can climb in relatively peace and not have to constantly be waiting on others to get through the difficult sections.

Don’t hike down. Please, just don’t. It’s annoying and dangerous. Do the loop (or a loop) like we did. See my map below.

Water. This is one tough hike. Make sure you stay hydrated. 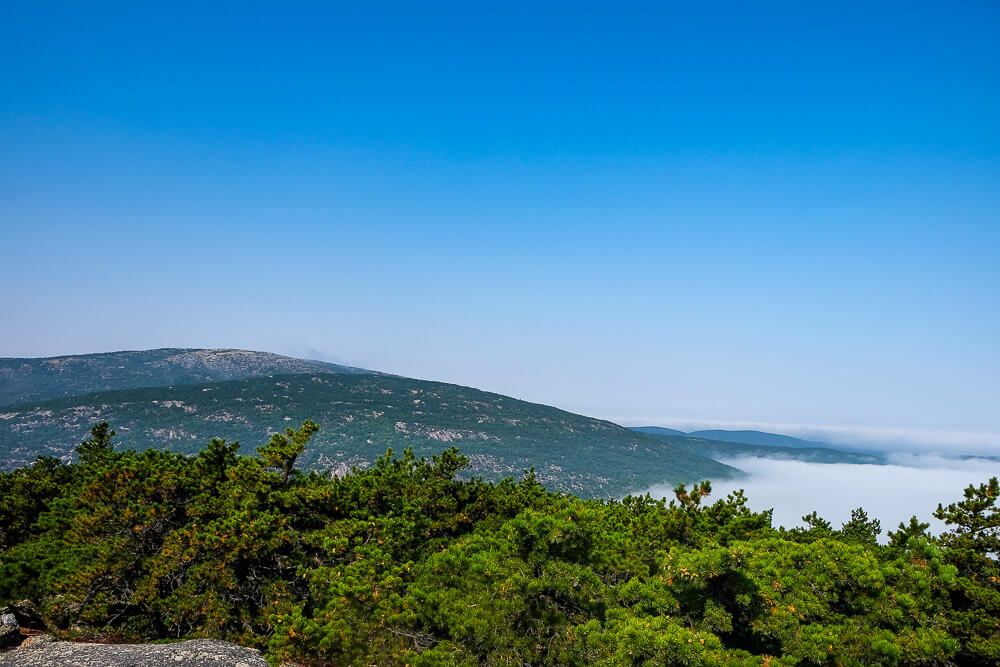 Getting There. You can find the parking lot for the Precipice Trail at the beginning of the Park Loop Road. Google even knows where it is. If you get there early, you can usually find a spot in the lot. If not, you’ll have to find a spot along the road.

Time. I stopped often for photos and finished in about 3 hours.

When can you hike. The Precipice Trail is closed in the spring and the summer (from about mid-march to mid-august) for peregrine falcon nesting. Please respect this closure and plan to hike this in the fall.

Cost. It doesn’t cost money to hike the Beehive, but you will need a pass to enter Acadia National Park. I bought a weeklong pass for $25. (Note that the Precipice Trail is before the entrance station on Park Loop Road. So you’ll need to buy your pass somewhere else beforehand.) 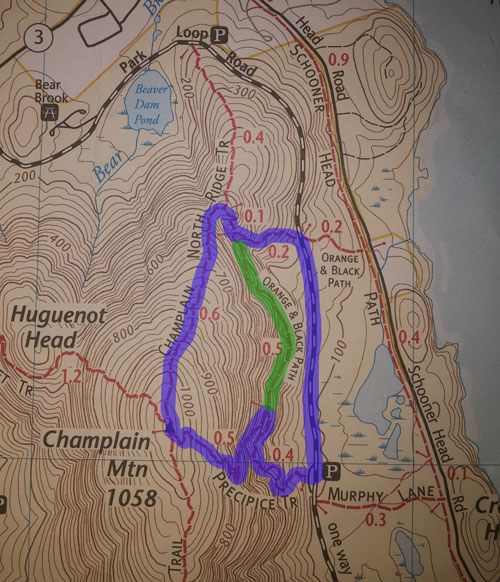 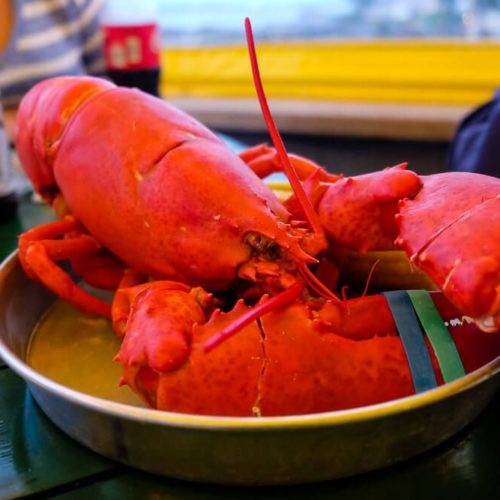 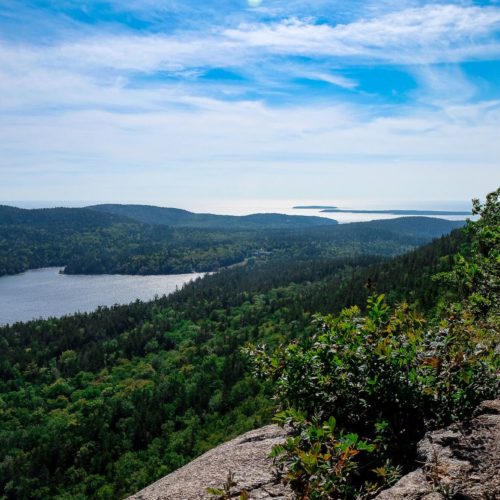 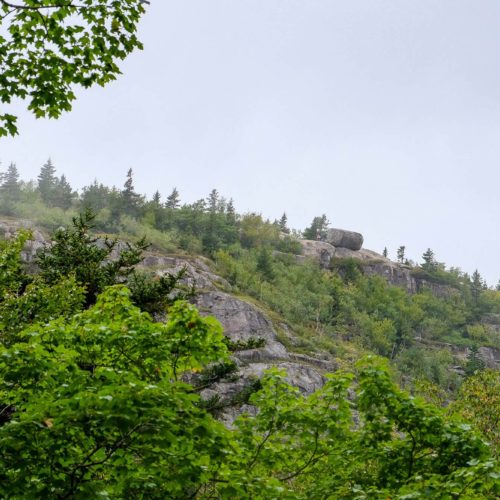 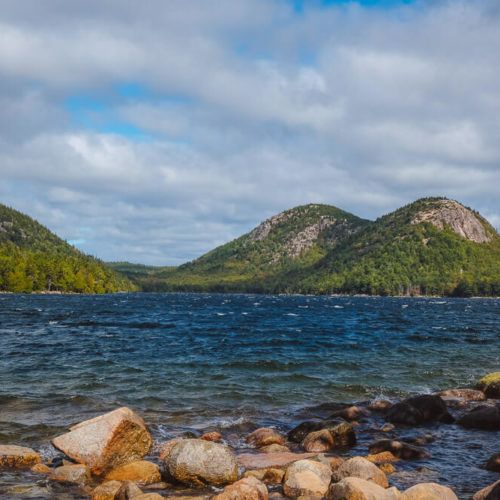 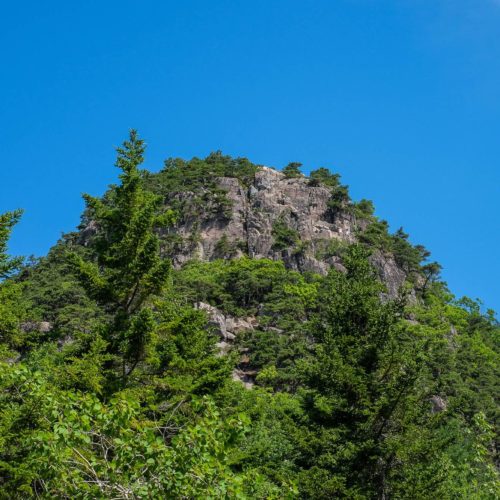 3 thoughts on “Hiking The Precipice Trail In Acadia National Park”