The Gorham Mountain trail can make a great loop hike for those looking to spend more time along the popular ocean side of Acadia National Park. It’ll take you along 3 great trails accessed via the Park Loop Road making it an easy addition to your itinerary!

Gorham Mountain is one of three mountains along the south-western coast of Mount Desert Island (where the Park Loop Road goes). The others are Champlain Mountain (with the Precipice trail) and the Beehive.

Due to the proximity of the Beehive to Gorham Mountain, you can actually hike both trails together! This loop guide will follow that recommendation, but I’ve also included several alternatives if you aren’t interested or don’t have enough time, to do the full loop.

This trail guide will take you up the popular Beehive with its iron rungs and exposed trails. Then up and over Gorham Mountain at a much gentler grade, but with amazing views of the coast from Sand Beach down to Otter Point. And it ends along the Ocean Path, granting you a closer look at what makes this coastline so majestic.

Read Next: The Best Trails in Acadia National Park

To start this loop hike, you’ll want to park at Sand Beach. I’d suggest getting there as early as you can (like before 8am). The parking lot fills up fast. If it’s already full, you can park along the side of the road starting at Sand Beach.

This hike will start on the Bowl Trail. The trailhead can be found directly across the road from the entrance to the Sand Beach parking lot.

The first part of this trail heads uphill among tons of small rocks. So expect to take this part somewhat slow if you’re not sure of foot. (I don’t want to twist my ankle, so I go slow.)

After .2 miles, you’ll come to the first intersection in the trail. Head right on the Beehive Trail to continue with this loop.

If you’re not interested in hiking the Beehive, or have less time, you can keep heading straight on the Bowl Trail. After .3 miles, you’ll reach a signpost. Head left here towards Gorham Mountain on the Gorham Mountain trail.

The Beehive trail is a steep, exposed, iron-rung trail. There are several iron-rung trails in the park, but the Beehive is probably the most popular. This is due to the fact that visitors can access it easy and quickly from the Park Loop Road. It’s relatively short. And it’s open during the summer (the others are closed for several months due to falcon nesting).

I love hiking the Beehive. After turning onto the trail, it begins its way upwards. You’ll be climbing up and over boulders, scrambling on rock faces, pulling yourself up via iron-rungs, and making your way across small bridges.

And as you go higher and higher, the vegetation around becomes sparser and sparser until it’s just you, the mountain, and the view.

If you’re afraid of heights, I would skip the Beehive. But if you’re up for some adventure, definitely include it.

I’ve written a longer trail guide for the Beehive so check that out for more details. Note that you’ll be turning off the trail right after the summit to continue towards Gorham Mountain, but if you want to see more photos and tips, definitely check it out.

Read Next: Hiking the Beehive Trail in Acadia

Once you reach the top of the Beehive, make sure to take in both of its views. The first one points towards Sand Beach, but just a little bit later, you’ll reach the actual summit of the mountain. And one hell of a view.

Once you’ve had your fill of the Beehive, it’s time to start your way towards Gorham Mountain. Continue on the Beehive in the same direction heading northwest along the trail. Not far after you’ve passed the summit, you’ll hit an intersection.

Make a left onto this connector trail (towards the southwest). This part of the trail is quite steep and rocky so take your time.

I believe you’ll pass through like 3 of these intersections as the Beehive Trail, the Bowl Trail, and the Gorham Mountain Trail converge.

This section of the loop has steep inclines, steps, and rocky sections as you make your way through the valleys here. But you’ll soon turn upwards towards Gorham Mountain and the ground beneath your feet will change to granite.

The vegetation and trees around you will become sparser, allowing you glimpses of the great views to your east. Make sure to look back the way you came for some amazing views of the Beehive as well.

The climb to the top of Gorham Mountain isn’t too strenuous (especially compared to the Beehive). And before you know it, you’ll reach the summit of the mountain.

The summit can’t be missed as a giant pile of rocks marks the actual top of the mountain. There are great sweeping views in each direction (even inland towards Cadillac Mountain) along the top of Gorham Mountain.

After you’ve gotten your fill, follow the trail down the south side of the mountain. The trail (and the mountain) swing out towards the coast a bit here. And the result is some of the best views along the entire trail.

You’ll get great glimpses of the Beehive, Sand Beach, and Otter Point. And all of them can be enjoyed easily due to the lack of trees and shrubs along the slops here.

But as the trail descends further down the mountain, you’ll find yourself in tree cover once again.

But I actually didn’t hike this spur. At this point my legs were getting tired and I went for the easier option. But it’s there (and indicated on the map below) if you’re interested!

Hiking to the Summit

I suggest hiking the trail in this direction (the south slope) as it will give you better views than on the northern side.

After you reach the parking lot, you’ll want to head back towards Sand Beach along the Ocean Path. This trail follows the coast from Sand Beach to Otter Point. It’s a great trail that gives you incredible views of the coast while being relatively level.

Two great views from the trail are of Monument Cove and Thunder Hole. But maybe the best part about hiking the Ocean Path is just stopping whenever you see a view that particularly calls to you.

I love diverting off the trail and heading out towards the water to stare at the landscape around me.

Read Next: 5 Awesome Things to Do in Acadia National Park.

So I would suggest stopping as often as you like. I’ve seen people bring out camping chairs and post up on the rocks by the water and just relax.

After you’ve gotten your fill, keep heading north on the Ocean Path. It will eventually bring you right back to Sand Beach and your car.

If you haven’t been down to the water yet at Sand Beach, I’d also suggest spending a few minutes to sink your toes into that Maine sand.

Read Next: One Week in Bar Harbor and Acadia National Park: An Itinerary

I’ve included two maps below. The first is from my tracking software and it includes an elevation profile. The second is from my map. I’ve highlighted the main loop in blue but I’ve also indicated any alternatives in red (like skipping the Beehive and the Cadillac Cliffs trail).

Remember if you want a shorter hike, you can also park at the Gorham Mountain parking lot and hike up to the top and back. 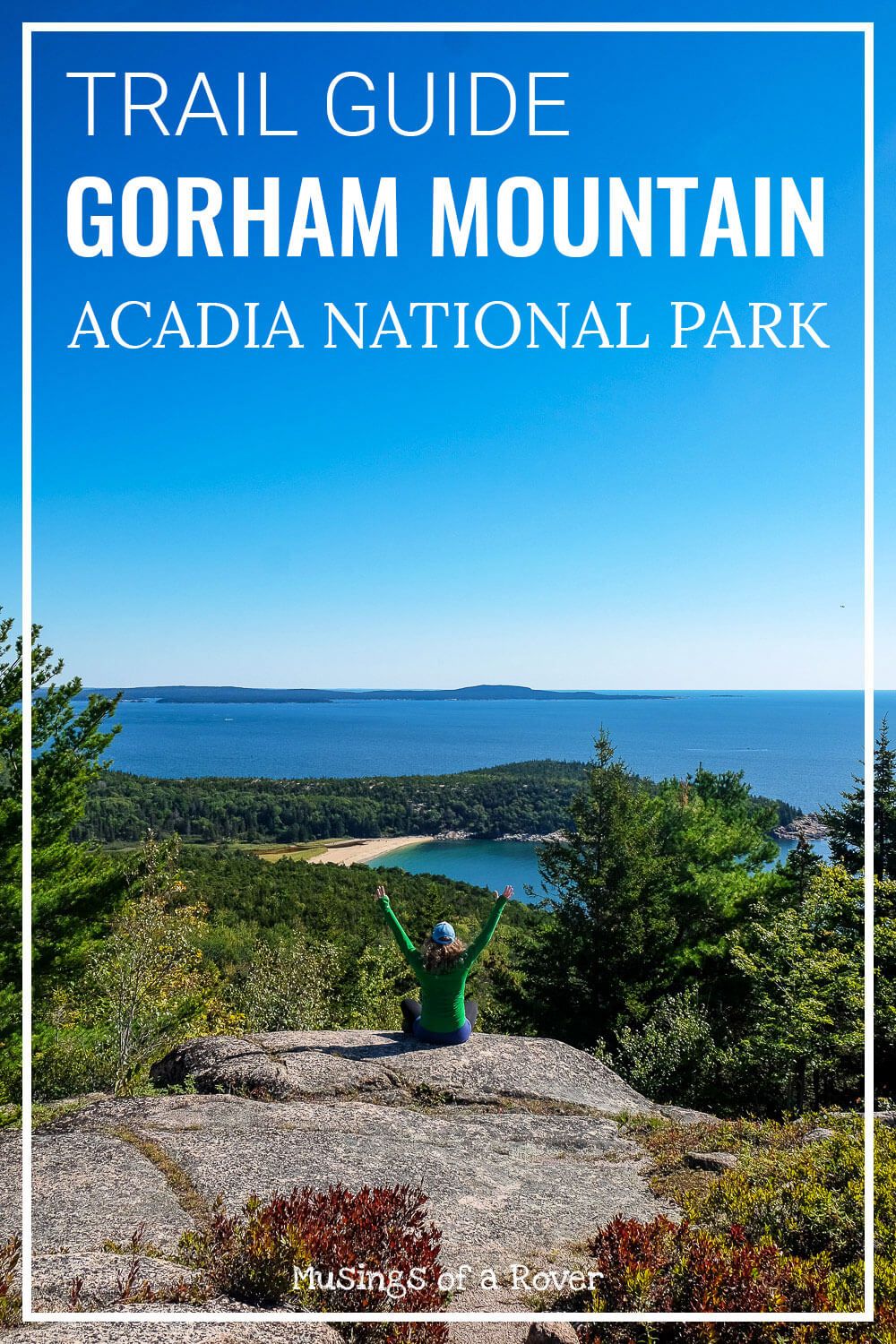