As summer comes to an end, and my soul cries out in anguish (oh how I love summer), there are several things I start to look forward to with autumn. The falling leaves, pumpkin beer, Halloween, and hiking.

Now I’m sure you may be thinking that one of those is not like the others. But in the South, hiking in the summer can be brutal. It doesn’t dissuade me, but after panting up a mountain in sweltering heat with my shirt plastered to my back, I do start to look forward to Fall hikes. And so with the cooling weather, I often find myself drawn to the woods. 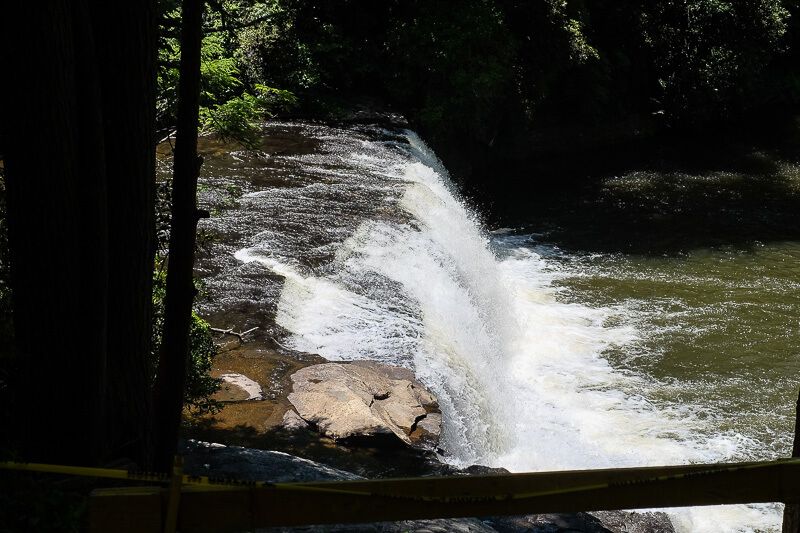 Luckily, living in the Upstate of South Carolina affords me with plenty of places to get my hike on in the Fall. And so I wanted to share one of my favorite hikes with you – the 3 Waterfall Hike in Dupont State Forest.

(Now I visited the waterfalls in June but this hike would be glorious any time of year: winter, spring, summer, and, of course, fall.)

After a weekend of brewery hopping in Asheville, we got an early-ish start out of town on Sunday. Sort of located on our way home to South Carolina, we headed an hour south of Asheville to Dupont State Forest.

Now, I didn’t know much about the area before we visited. In fact I only knew three things. That it has a ton waterfalls. That there are miles and miles of trails. And that some of the Hunger Games was actually filmed there! (No joke! The scene where Katniss finds Peeta when he’s hurt was filmed at Triple Falls.) 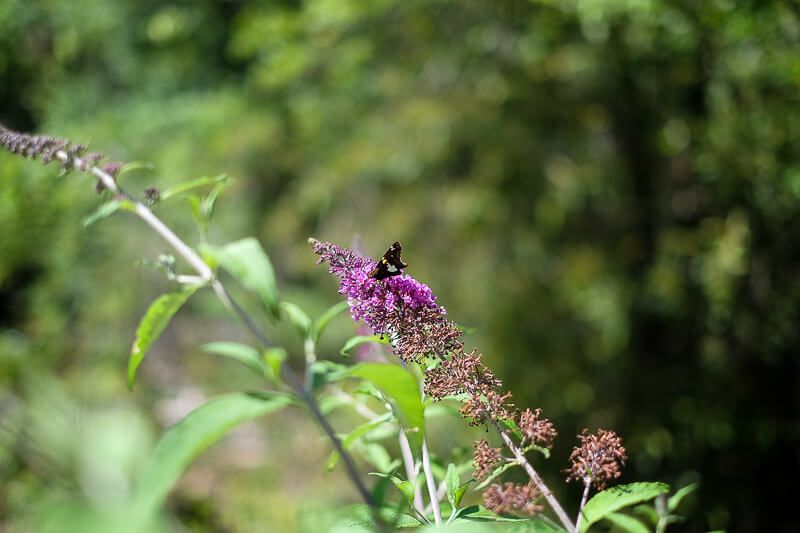 So our plan for the day? To orient ourselves to the Forest and see the three most popular waterfalls: Hooker Falls, Triple Falls, and High Falls.

Parking at the Hooker Falls Parking lot (or actually, on the side of the road about 100 yards from the parking lot), I discovered just how popular these hikes are. Translation: really popular. There were so many cars that I was starting to wonder if it would be too many people.

But we soldiered on and headed for our first waterfall: Hooker Falls. 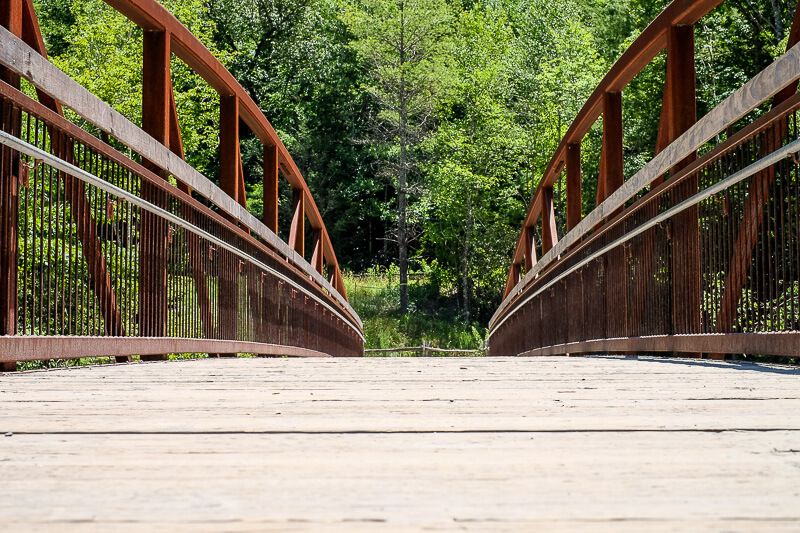 An easy 5-10 minute walk from the parking lot, we reached the overlook easily. Already I could see the hordes swarming around the waterfall, but we continued on to the base of the falls.

There were people everywhere. I felt my annoyance level rise and my patience level fall as I made my way through a sea of kids, towels, coolers, dogs, and chairs.

Finally, I managed to score a spot along the shore to watch the waterfall. And it was beautiful. The smallest of the three waterfalls, Hooker Falls tumbles off a ledge just a mere 12 feet from the river below. 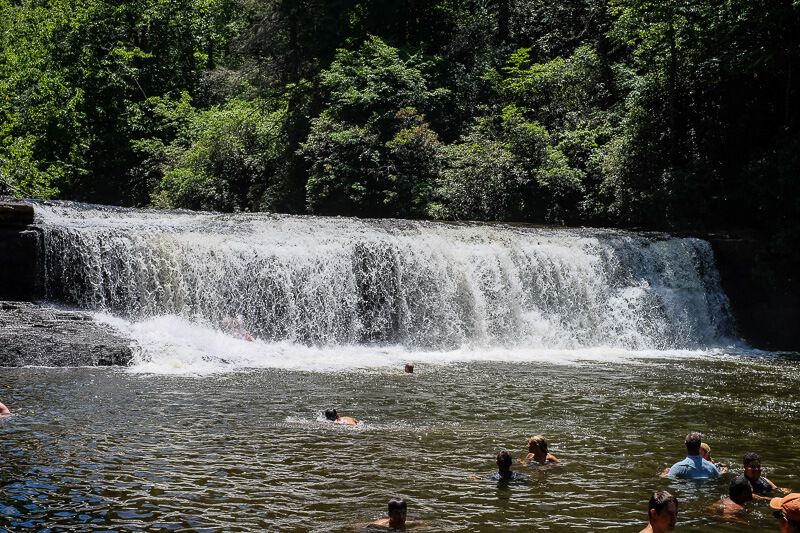 During the summer you can climb along the rocks at the base of the waterfall. I even saw some people try to duck under the falls and hide behind the curtain of water. I briefly thought about joining these brave souls but…

I had not packed my suit. And let’s be honest – that water was extremely cold. All I could do was take off my boots and tiptoe out into it (while trying to avoid the swimming children).

Our time at Hooker Falls was not long, and soon we were headed back towards the parking lot and across the bridge to Triple Falls. 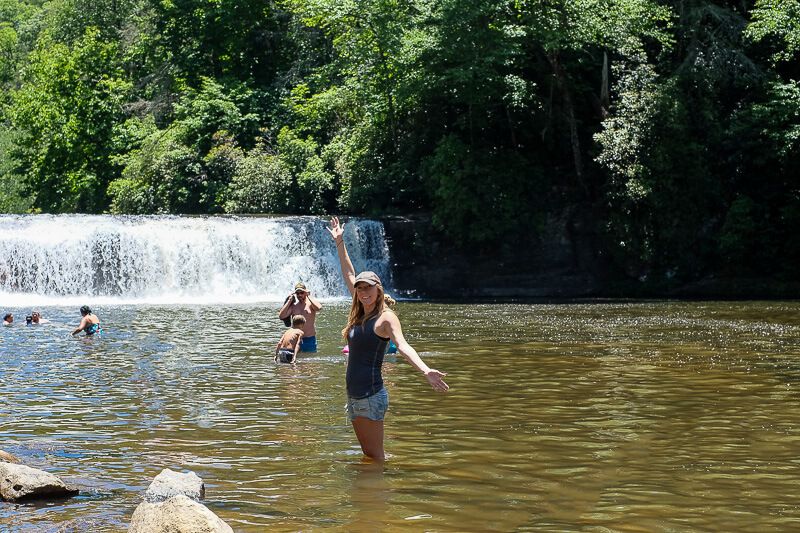 Perhaps one of the best things about this hike is that it doesn’t take too long. After crossing the bridge at the Hooker Falls parking lot, we followed the trail along the river for about another ½ mile or so.

The only bad thing about this walk though? There is one hell of a steep hill between the bridge and the overlook. Ryan and I joined the hordes huffing and puffing to the top of the hill where we finally reached the overlook. 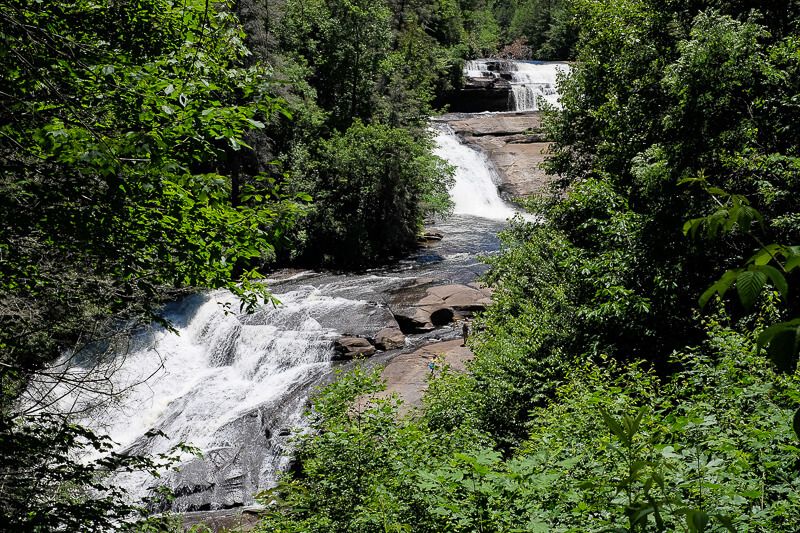 Triple Falls is made up of (yep you guessed it) three separate waterfalls. Together, they drop about 120 feet. From the overlook you can see all three waterfalls as one, but we soon discovered that this spot wasn’t even the best part.

Continue past the overlook and you’ll find a smaller trail shooting off to the left. Head down a ton of steps and you’ll find yourself in small rock clearing between the middle and bottom waterfall.

This was one of my favorite parts of the hike. Two waterfalls above me and one below. 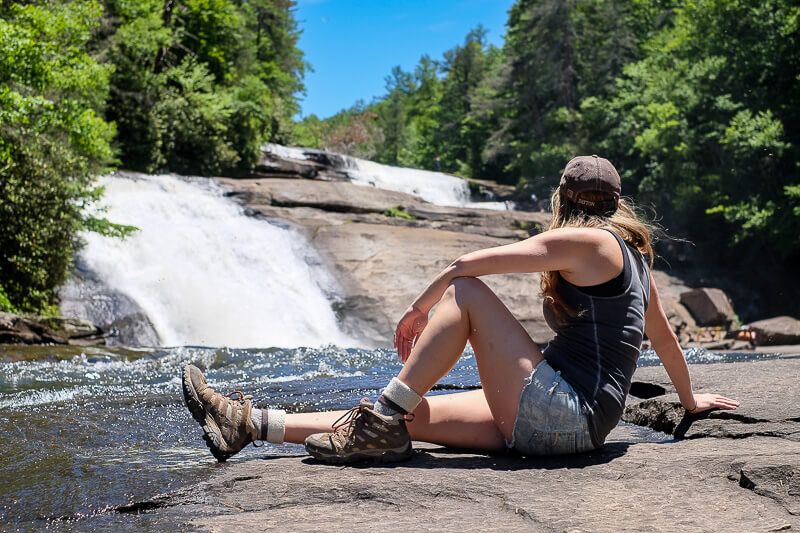 And though there are plenty of people around, there was more space here. It didn’t feel as crowded. We scored some pretty sweet spots near the top of the 3rd waterfall and simply sat back and enjoyed the view.

Now one thing to note here, some people were swimming in the small pool at the base of the middle waterfall. I wouldn’t really advise doing this since, you know, if you got swept away you’d find yourself going over another waterfall in a matter of moments. In fact, we saw one man seriously struggle to free himself from the current in the pool.

So, you’ve been warned.

After getting our fill, it was onto the granddaddy of the hike: High Falls. 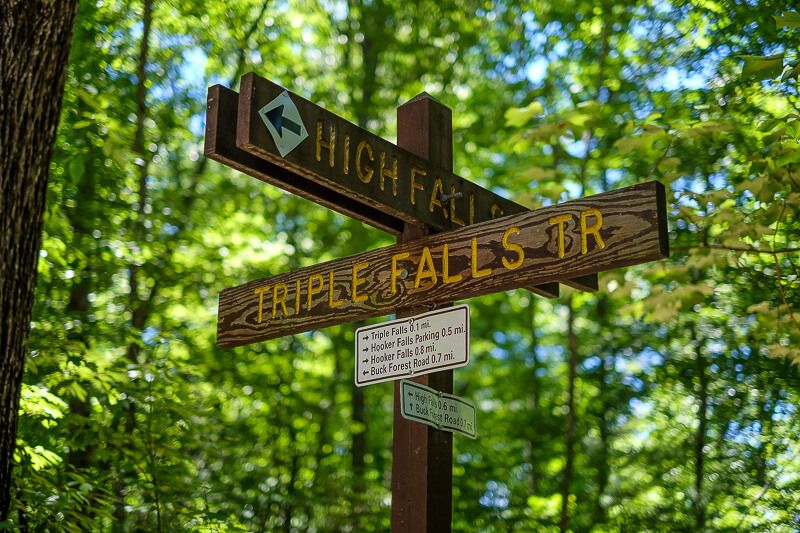 At the top of the steps, we continued on, taking the High Falls trail when it appeared to our left.

We knew it was only about another ½ mile, but the day was already starting to get late. We would only be able to do either the base of the High Falls or the overlook above it. We just didn’t have time to do both.

We decided on the base.

To get there, we simply took the River Bend spur off of the High Falls trail (don’t worry – there are lots of signs).

Now if I thought Hooker Falls or Triple Falls were impressive, then High Falls blew me away. I had no idea a waterfall of this size was hiding only an hour away. 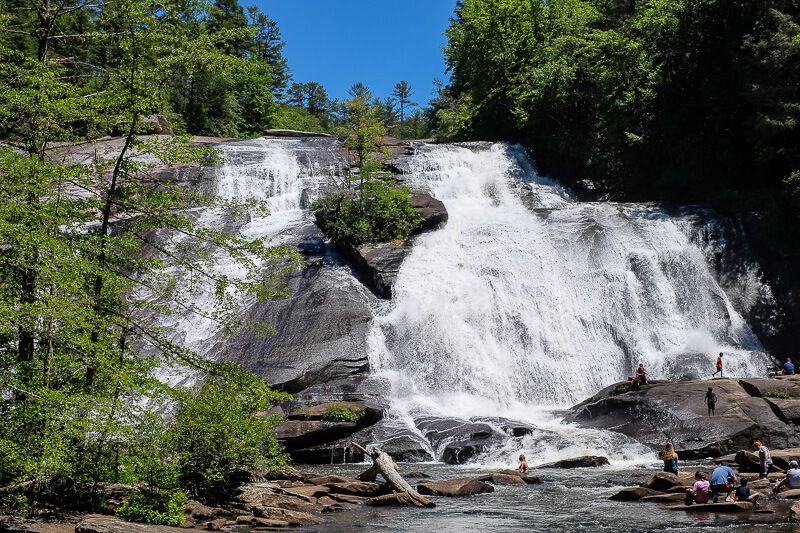 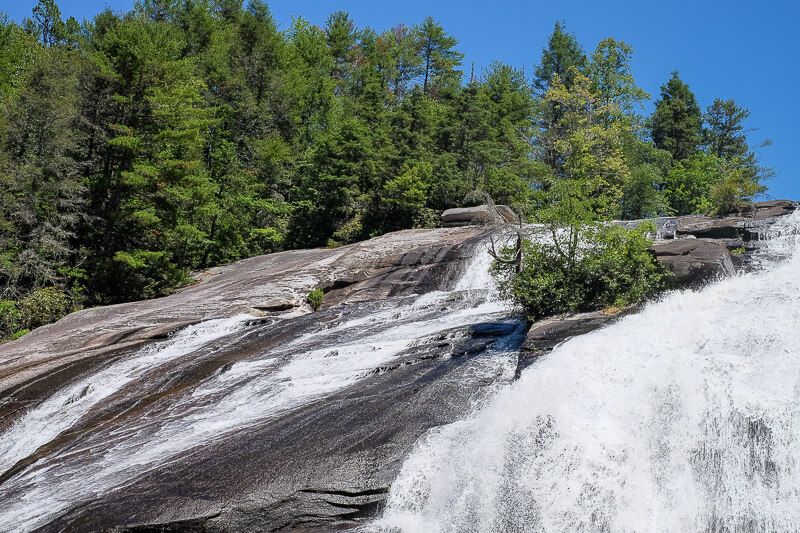 High Falls tumbles 150 feet down a single cascade. I felt my jaw drop as we came upon it.

To get a closer view, we scrambled along a very narrow trail towards the base of the falls. And just like the others, there were plenty of people enjoying the view and the water. We often had to step aside to let others pass.

But finally, finally, I made it to the base of High Falls. After scrambling onto the boulder, I stood as close as I could. Tiny droplets sprang out towards me, hitting my face and clothes.

I could feel the waterfall. 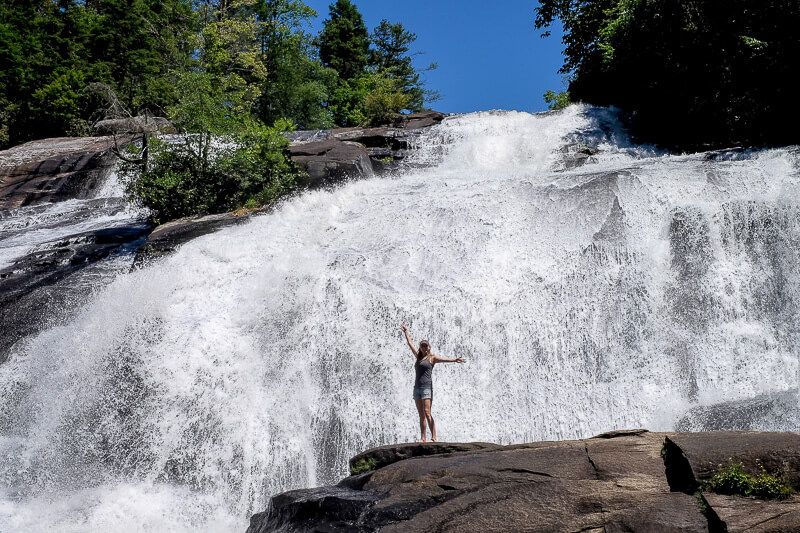 So were there a ton of crowds? Yes. But sometimes the crowds are there for a reason. Sometimes it’s because everyone wants to see and feel waterfalls in their own backyard. And Dupont State Forest definitely delivers on that front.

Now I went in summer. But the Forest would be just as beautiful in the fall, winter, or spring. And if you are able to get there early enough, you may just have it all to yourselves. 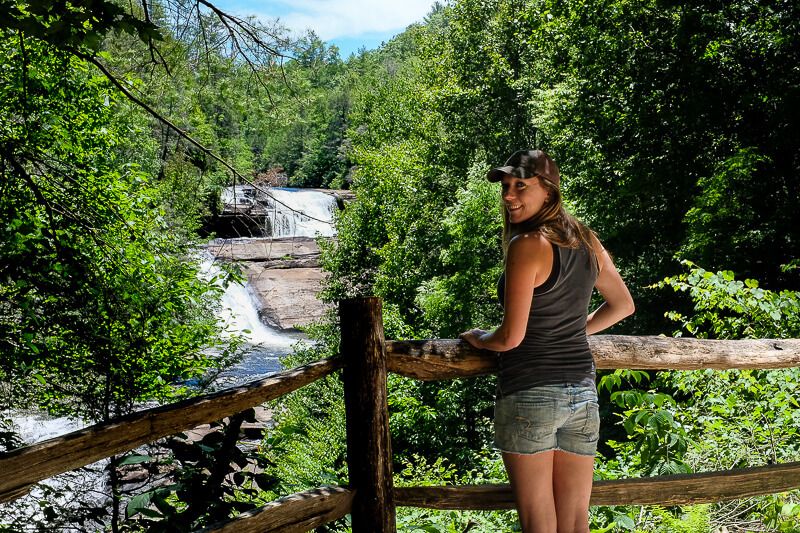 Did you know about the waterfalls in NC?

Where to park? We parked at the Hooker Falls access in Dupont State Forest. Here’s a Google Map of the location.

When to go? This hike is most popular in the summer and fall. Think about hitting the trail early in the day or on the weekday to beat the crowds.

Waterfall Access Map. Here is a small map of Dupont State Forest that shows where you can find the three waterfalls (and the trails you’ll use to get to them). 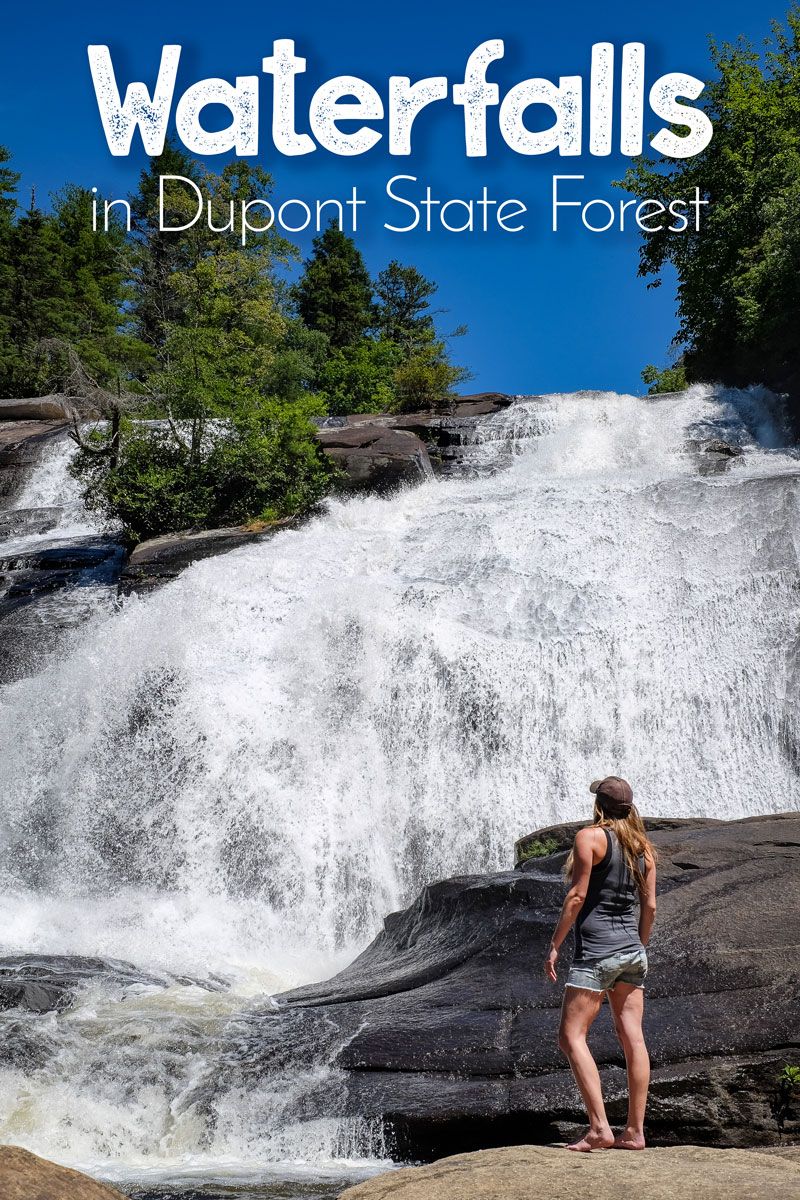