Want to drive the Cades Cove Loop Road? That’s awesome! This is one of the best things to do in Great Smoky Mountains National Park. It’s also one of the most popular things so you’ll want to plan your trip out there well so you can make the most of your time.

There are lots of things to do in Cades Cove. Camping? Check. Wildlife viewing? Check. Hiking? Check.

Basically it’s a great introduction to the Smokies and is one of the must-sees of the national park. (And as someone who visits the Smoky Mountains several times a year, Cades Cove is popular for a reason.)

Read Next: Rainbow Falls is a great (and tough!) hike outside of Gatlinburg.

What is the Cades Cove Loop?

Okay so first up…what is Cades Cove? Well a cove is like a big, flat valley that is surrounded by mountains. And the loop road is an 11 mile one-way road that rings the the valley.

So it’s a big valley surrounded by mountains. Most of the center of the cove is cleared so you’ll be able to see across fields to take in the cove.

(If you want to know more about the history of the cove and sites, there’s a booklet you can buy at the beginning of the loop road for $1. I found this to be helpful for understanding what I was seeing.)

Walking around these old structures was exciting for me (history nerd), but I do think most people would find it interesting to see how people lived not all that long ago.

You should know thought that this is a very popular driving tour in the Smoky Mountains. Approximately 2 million people annually make the drive. And it’s very busy in the summer and on weekends year-round. More about beating the crowds below!

My Favorite Stops Along the Cades Cove Loop

This log cabin was built by John Oliver in the early 1820s and is the oldest log home in Cades Cove. This home is a bit of a walk from the small parking lot, maybe a couple hundred yards.

To get to it you can follow the trail through the woods or fields to reach it.

This is the first church along the road and it was established in 1827 though this building wasn’t built until 1887. The church is off to the left side down a narrow dirt road.

The Methodist Church is right by the road, making it a quick stop if you are short on time. I liked that this one had two doors. Apparently some churches have men and women enter and sit on separate sides. And though this church didn’t follow that custom, they used building plans from a church that did.

The men and women who started this church split from the Primitive Baptist Church in 1839. Though this building is quite new for the cove (1915).

If you’re good with churches by the time you reach this one, I think you can skip it if you need to.

This house is a bit of a walk from the road (½ mile). It’s fairly level though and we were able to get there in just about 10 minutes.

This cabin was owned by Elijah who was the son of John Oliver (from stop #3). There are several buildings here other than the main cabin: smokehouse, springhouse, corn crib, and barns.

I liked that this cabin also had a “stranger room” which is accessed out on the porch for overnight visitors.

You can also hike here from the Abrams Falls trailhead and it’s also a ½ mile if you’re planning on stopping there too.

This popular day hike is located off of the Loop Road. There’s a paved road leading off to the right after passing the Elijah Oliver Place parking lot. And there’s also a sign pointing to the trailhead.

The parking lot is large and there are some pit toilets here as well. The hike itself is lovely and quite flat with a great waterfall at the end of it. Expect to spend 2-3 hours doing this 5 mile round trip hike. We hiked it in about 3 hours with lots of stops for pictures.

This is the largest stop along the Cades Cove Loop. And there are several buildings here. The main one is the Cable Mill which is original to the site. The others were brought here from around the park to put together this little historic community.

The Cades Cove Visitor Center is also found here. There are bathrooms and a little shop where you can buy souvenirs, a few snacks, and maps/guides.

The two I enjoyed the most was the house which was originally a store and was enlarged over time to house the Cable family. The last resident of the house was Aunt Becky who lived in it until she was 96 in 1940.

The second was the cable mill itself. The water-powered mill (with wheel) powered a grist mill and a sawmill in the late 1800s.

After the Cable Mill there are four more old homes along the Cades Cove Loop Road. I enjoyed stopping at them, but if you only have time for one, the Tipton Place has the most buildings to explore.

There’s the house itself from the early 1870s, the blacksmith shop, smokehouse, woodshed, double-pen corn crib, and a cantilever barn replica.

Of these homes we couldn’t visit the Henry Whitehead Place (stop #12) in the winter since the Forge Creek Road was closed. The other two (Dan Lawson Place #15 and Carter Shields Cabin #17) are both cute cabins and if you’re into history definitely consider stopping at them.

But by the time we reached the Carter Shields Cabin my non-history major boyfriend had probably seen enough cabins for the day.

The Great Smoky Mountains National Park is America’s most visited national park. You will never be alone in the more popular areas of the park (Cades Cove included). But some times are better than others.

The busiest times for the park are in the summer from July to mid-August and October (especially on the weekends).

Expect lots of cars on the Cades Cove road during these times.

Our first visit to the Cades Cove Loop was in mid-February. It was a warm-ish weekend (highs in the high 40s / low 50s). Saturday was super sunny (though Sunday was misty). And though there were cars and people (as seen in my photos here), we got several moments by ourselves at the cabins and historic sites.

If you are here during the summer, I’d aim to either do the loop early (like before 10am) or after 5pm. In October though the afternoons and evenings are quite bad so I’d aim for the morning.

During the high season though the road is closed to motorists before 10am on Saturdays! Keep reading for more details.

How busy are we talking? Some people we talked to mentioned that during the high season, driving the loop without taking any stops took 3 hours. Others mentioned that there were so many people at the stops to not make it enjoyable (or be able to find parking).

You can also avoid motorists altogether by walking/biking the loop road. On every Saturday and Wednesday from early May to late September the loop road is closed to cars and other motor vehicles until 10am.

If you can’t bring your own bike, consider renting one at the Cades Cove Campground Store (also located near the start of the loop road).

Tips for Your Visit to Cades Cove

If you’ll want to stop at any of the historic sites, build in an extra hour or two. And if you want to hike any of the trails, you’ll also want to budget some time for that.

Plus it’ll take you about an hour to reach the cove from the Sugarlands Visitor Center.

I personally think driving out to the cove, touring it, stopping at some sites, and maybe hiking a trail is an all-day thing.

Is there a campground at Cades Cove? Yes there is! It’s one of the more popular ones, but it’s open year-round. There’s also a campground store (though it was closed in the winter when we went).

Information on booking at Cades Cove is found here.

Wildlife watching. This is one of the top things to do while driving the road. However be sure to pull over to the side of the road. Stopping in the middle is what causes many of the backups and traffic jams.

What animals can you see? There are deer, bears, turkeys, and more! Though don’t expect to see any elk here. They’re only located in the southern and eastern parts of the park.

Don’t mark the cabins. Just please don’t. Not only is this illegal (these are historical structures), but I found it annoying to see all of these beautiful buildings marred by people. Like why? Why? Don’t ruin the experience for others.

To get there from most areas in the park, you’ll head towards the Sugarlands Visitor Center and then continue past it. This 25 mile-ish drive can talk almost an hour due to the winding roads.

If you are staying in Townsend, this distance is more than cut in half and can be a good base if your visit to the Smokies is based around Cades Cove.

Drive slow and be careful!

Other roads in Cades Cove. There are a couple of other roads around Cades Cove other than the main loop.

Rich Mountain Road (closed in winter) connects the Cades Cove Loop Road to Townsend. This is a one-way road out of the cove and can be a good way to leave the cove after you’ve finished touring.

Parson Branch Road (closed in winter) connects the Loop Road with Highway 129 in the south-west. It’s also a one-way road out of the cove.

The other two roads inside the cove are Hyatt Lane and Sparks Lane. These cross the cove and connect the northern part of the Loop Road with the southern. You can drive both ways across these lanes to extend or cut short your auto tour.

Cades Cove Map. You can see a Google Earth map here. But I’ve included a picture of it and the one from the booklet below as well.

I hope you have a great time driving the Cades Cove Loop! 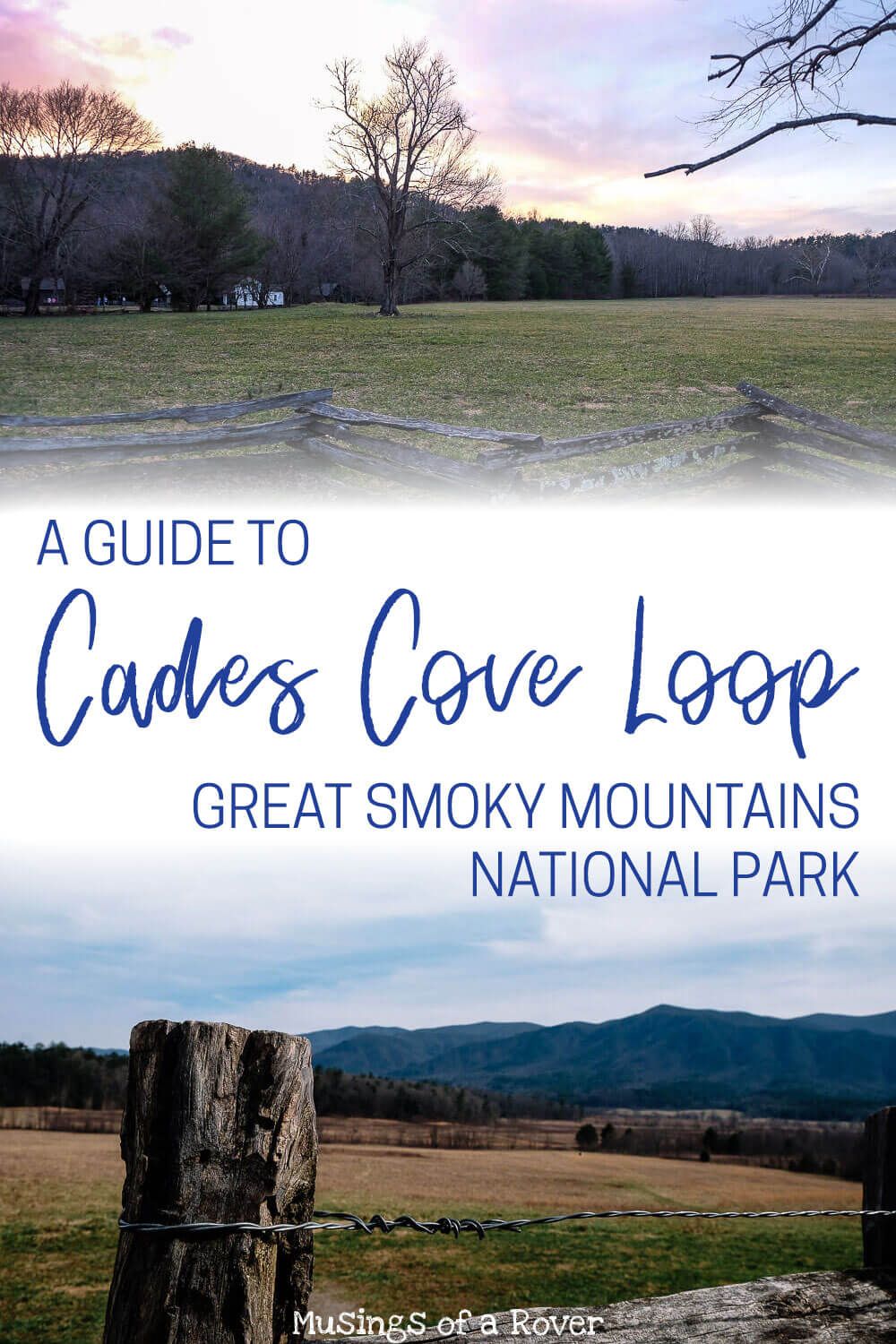 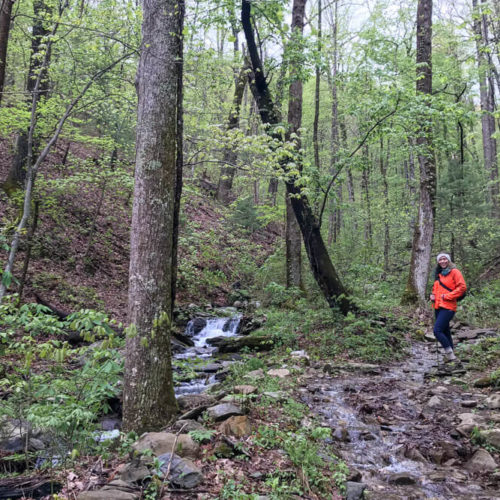 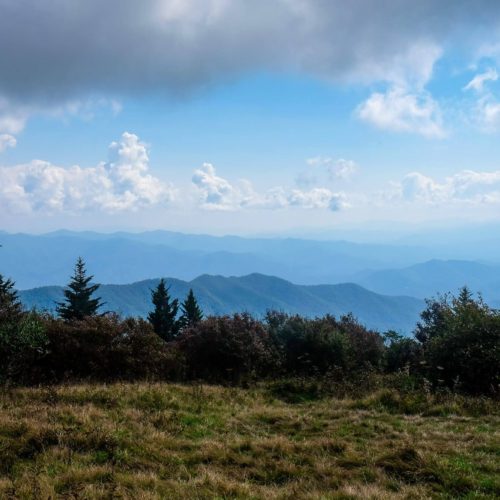 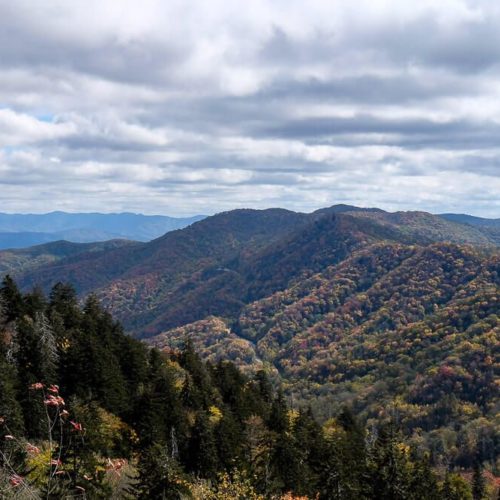 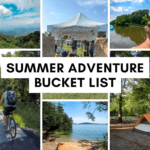 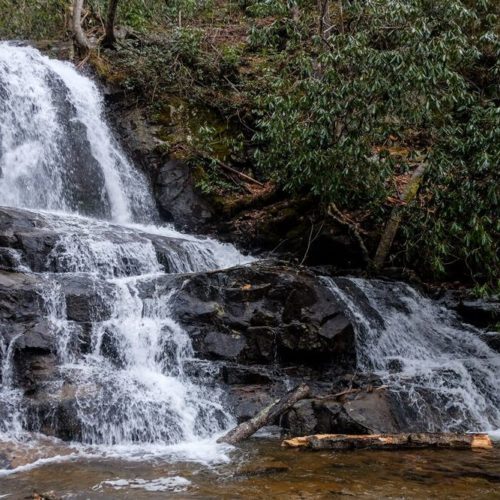 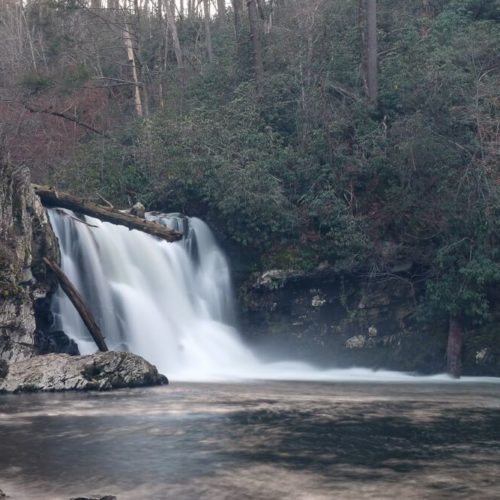 One thought on “Driving the Cades Cove Loop Road”