After our first trip to Bar Harbor several years ago, there was one thing that stayed with me. Something I wasn’t able to do. At the time I saw it, I thought it looked ridiculous. Crazy. Especially considering my fear of heights. But over that week, it stuck with me and the idea grew. And though I didn’t get to do it that trip, on our next trip I knew it was something I wanted to try. I wanted to go rock climbing in Acadia National Park.

I remembered what the brochure looked like. One climber, dangling against a cliff face, the sea crashing below them. Scary. Yes. But awesome? Definitely. And when I spotted the brochure again, I grabbed at it. This time it was happening. 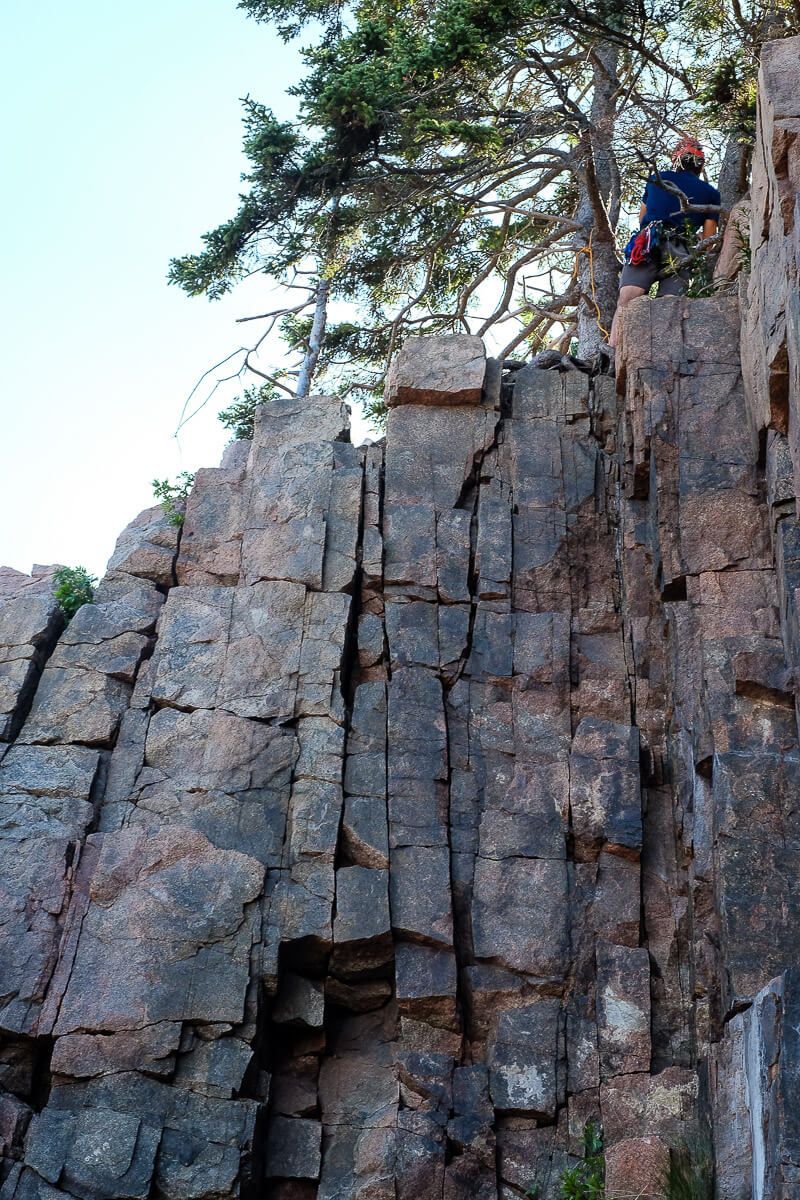 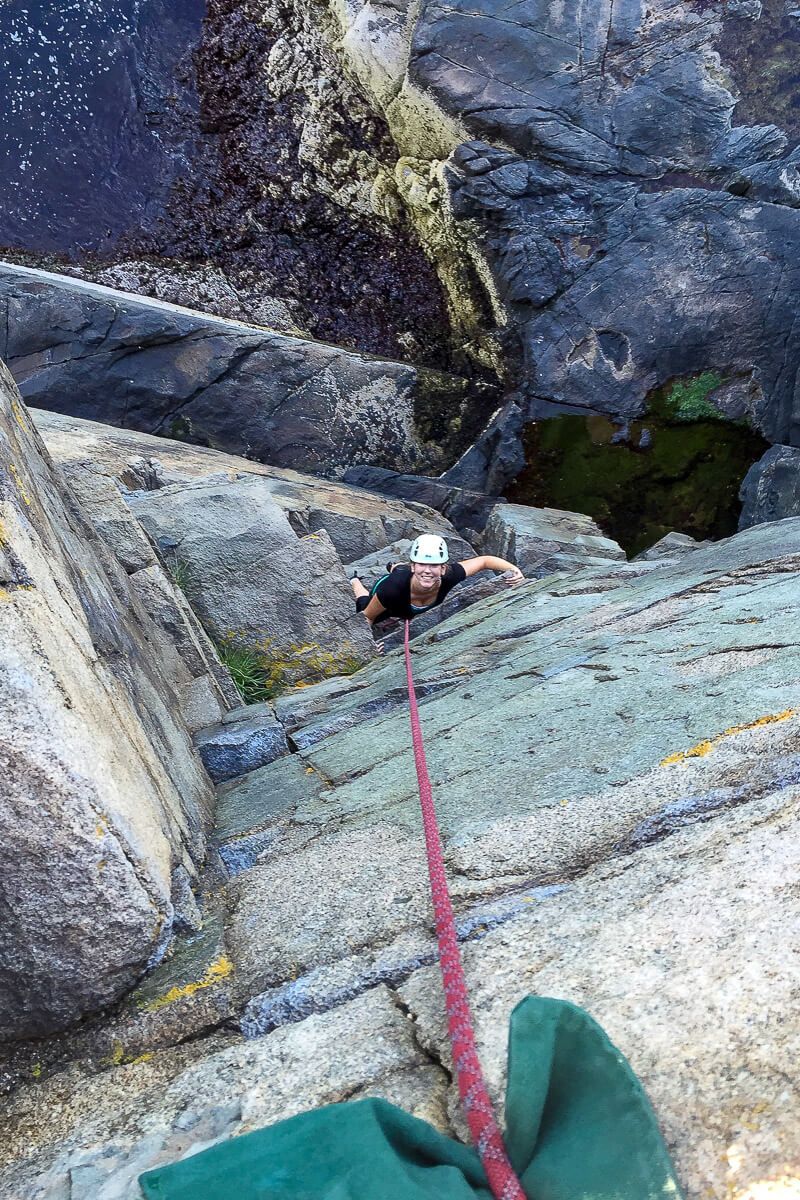 So, first things first, obviously I needed to go with a guide. There are two companies in Bar Harbor, and upon scouting them out I decided to go with Acadia Mountain Guides. I even convinced my sister to join me. We scheduled our climb for a few days out.

Unfortunately on the morning of the climb, I awoke to the pitter patter of rain hitting the roof of our rental house. Within moments my phone was ringing. Acadia Mountain Guides told me that we could still go out. That rock climbing in the rain was just as safe. But they did admit that the climbers often find the rain a bit unpleasant.

Unpleasant. I was already going to be clinging to a rock face, best not to make the experience any harder.

They graciously refunded our climb and helped me schedule a solo climb for my last day. My sister was leaving a couple of days early and couldn’t go on another climb. This time it was just going to be me.

The day of the rescheduled climb, I awoke to clear skies. It was happening. I was about to go rock climbing in Acadia.

We headed to the office and met up with my guide Matt. He helped me pick out my gear while explaining what it was for and how it should fit. Then we piled into the rental car and headed towards the park. 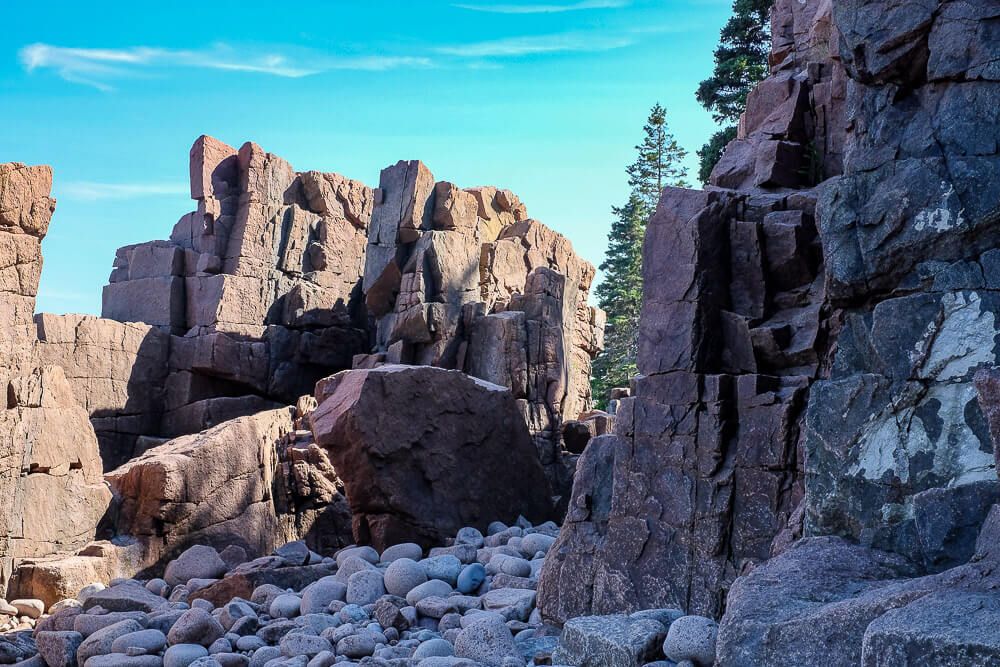 Since I had told Matt I wanted to start off easy, he took us towards the smaller cliffs around Thunder Hole. I believe this area was called Pebble Beach.

He pointed to my first climb, and I nodded as he explained the equipment and hooked it all up. I just kept staring at the rock. It wasn’t even that big but my heart started to pound as I stepped into the harness.

I could do this, I told myself. I would just focus on the climbing and not look down. Don’t pause, don’t rest. You can do this.

Matt was at the bottom, all hooked in himself. As I climbed, he would tighten the rope so that if I did fall, I wouldn’t go anywhere.

At that first cliff though, he looked so nonchalant. On the way there we had talked about Yosemite and his dream of climbing there. This what, 30 foot cliff, was probably nothing to him. He nodded at me and smiled. Time to climb.

I gulped and stepped up. Remember…don’t think. Just climb.

I went fast. Not thinking. Towards the top, I panicked slightly, not sure where to place my hands, but I told myself to calm the down and just breathe. Plus Matt was below me, telling me where to look and where to place my feet whenever he saw me pause. And the whole tightening of the rope under me as I climbed was definitely reassuring.

Then I was done! I rappelled back down to the ground. Turning to Matt smiling, he nodded and told me that was great. And that I should probably do it again one more time before we moved on to another spot.

We did about 4 climbs there along the cliff face, with each getting progressively harder (fewer hand and foot holds). Then he led me down the beach to “something a bit more interesting.”

He pointed to a crevasse and told me I would be climbing there. And as it narrowed towards the top, I would be placing my back against one of the walls of the crevasse and my feet on the other and inch myself up slowly. And he would be waiting at the top this time. 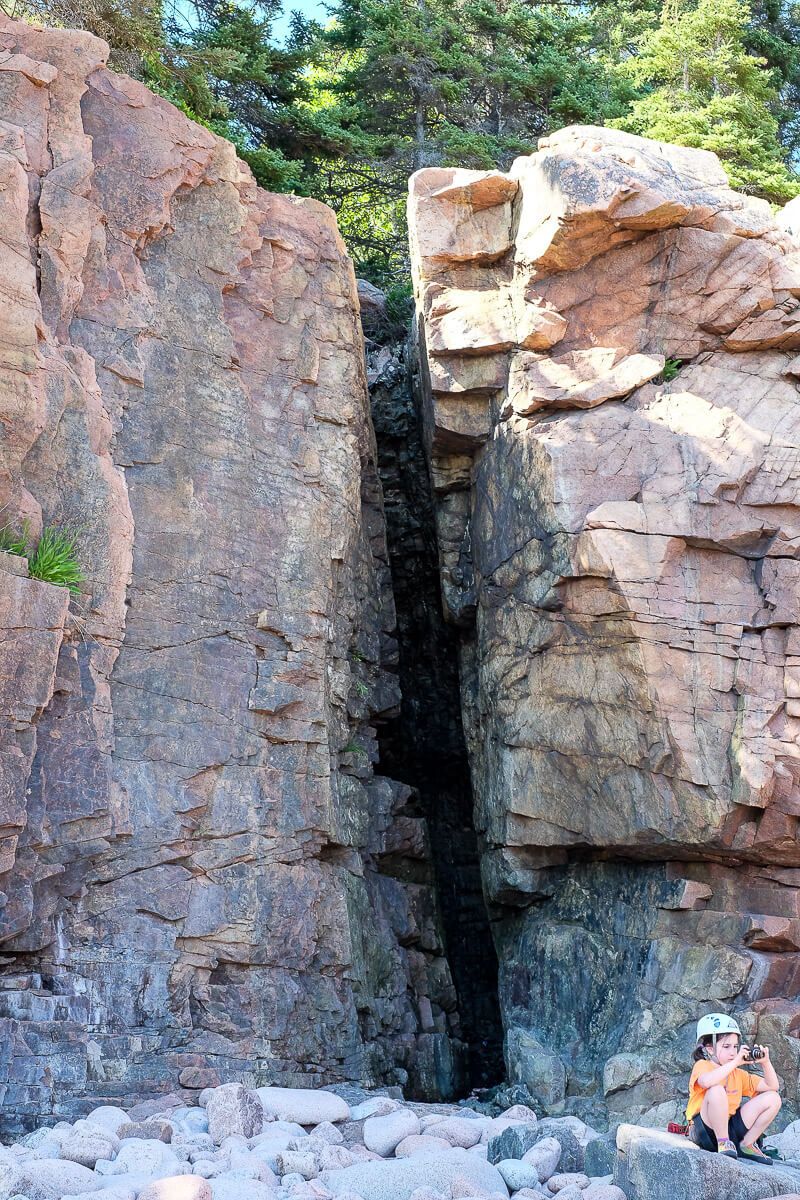 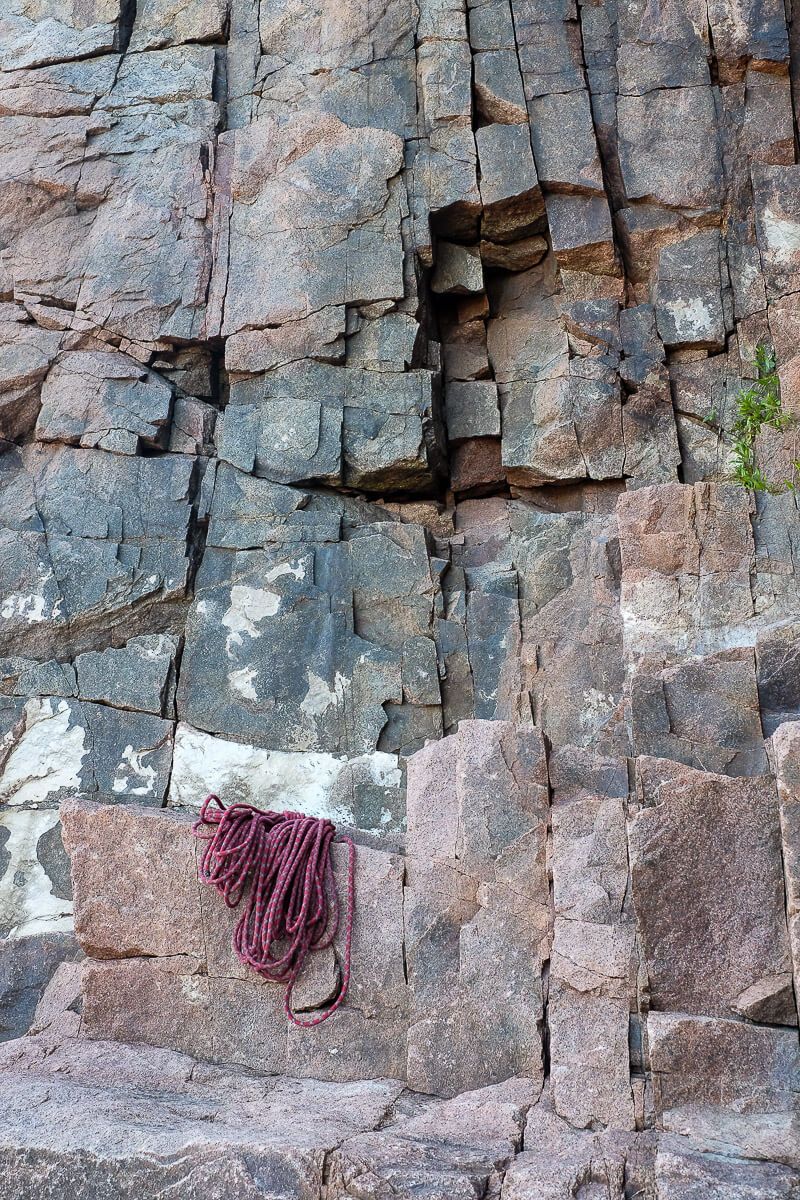 As he left and I waited at the bottom, a small family happened nearby. They were climbing some smaller walls only 20 or so feet away. As Matt yelled to me at the bottom to hook myself into the rope, the smallest girl widened her eyes. “You’re going to climb that?”

I nodded smiling. Yes, yes I was.

This ended up being my favorite climb. It was different, challenging, but didn’t rely so much on upper body strength (thank god). The switch from climbing normally to pushing my back against the wall behind me was a bit nerve-wracking but thrilling.

I emerged from the crevasse grinning from ear to ear.

Before moving on to the final climbing spot, Matt had me rappel (from the top) all the way to the bottom. Stepping backwards off the climb was terrifying. Probably the scariest part of climbing in my opinion. And this small 30 foot cliff was just the warm up. 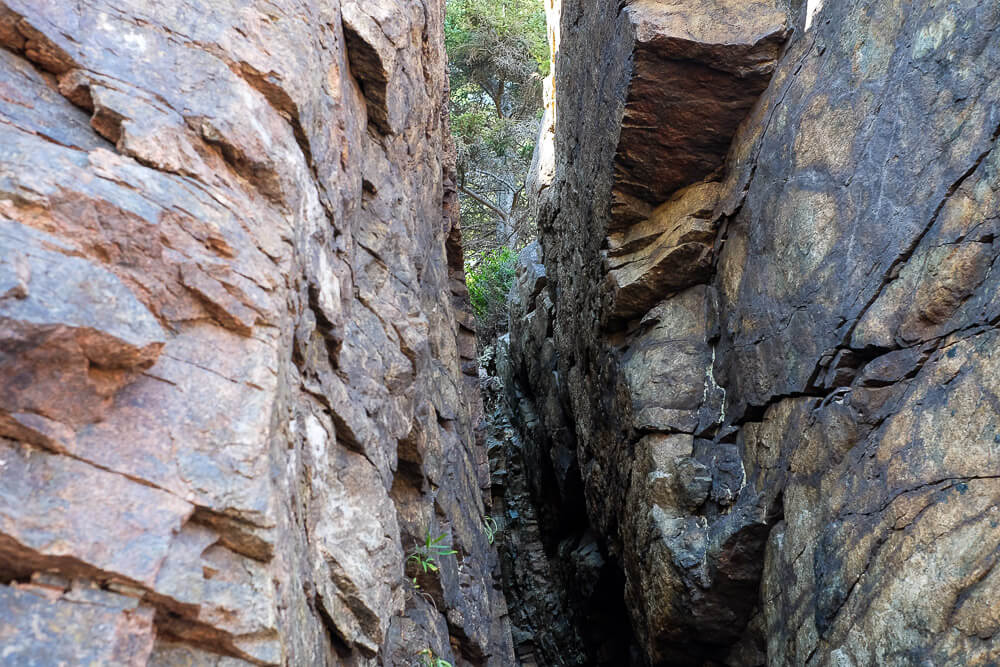 To reach the next spot, we got back in the car and drove to Otter Cliffs. I started to get nervous again. I had been to Otter Cliffs a few times before and I knew how tall they were. At least twice or three times what I had just done.

But Matt told me I could handle it. That I had tackled the smaller cliffs easily and that this, this cliff would be more my style.

As we approached, I couldn’t help but notice how tall it was. And that it basically dropped off right into the water.

I was going to be that climber on the brochure.

The absolute worst part of this climb? Backing off the cliff face and rappelling to the bottom. It was terrifying. Not the rappelling per say but the backing off the edge thing. Easily the scariest part of the whole trip. And the only way back up was to climb. With Matt yelling encouragement down to me.

From the bottom he looked very small.

I started off strong. Climbing quickly, forcing myself not to look down. Then I came upon one of the “challenging sections” Matt told me. It took me several minutes (and more than a handful attempts) to get past it and reach a small ledge to rest on.

I had made it a 1/3 of the way up so far and the ground was already pretty far below me. 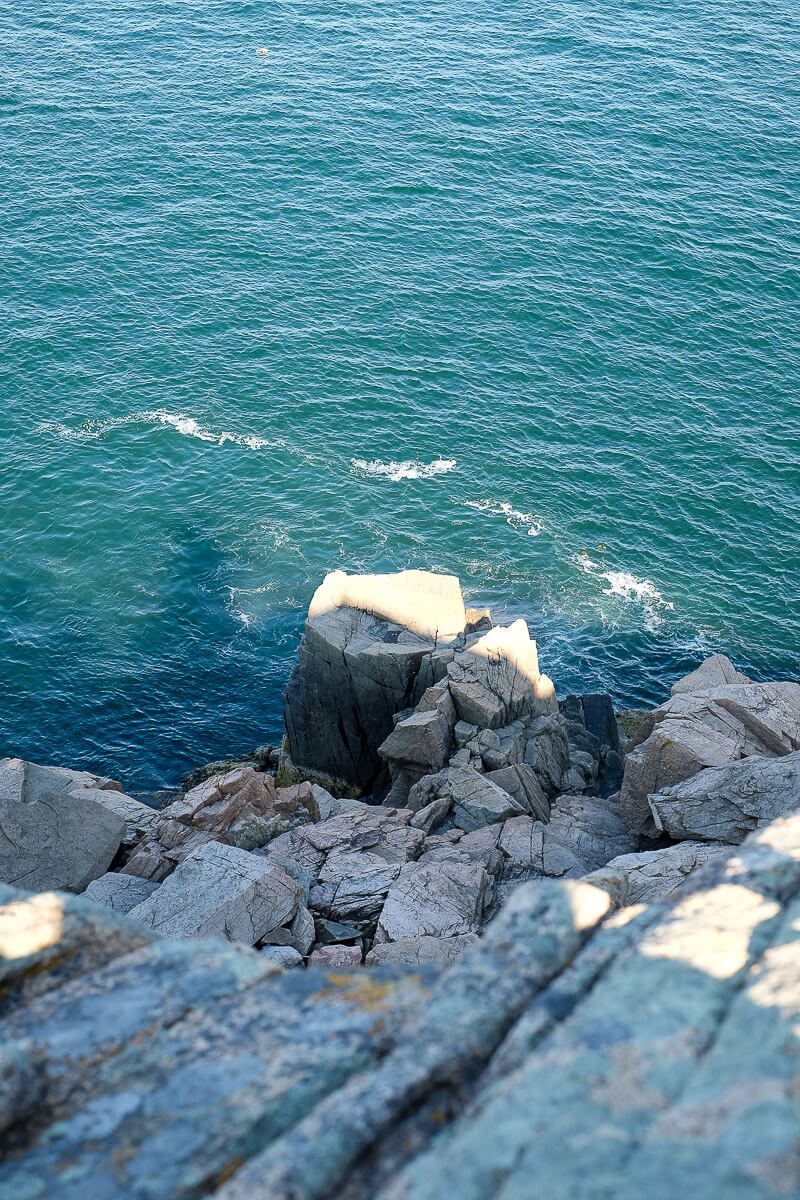 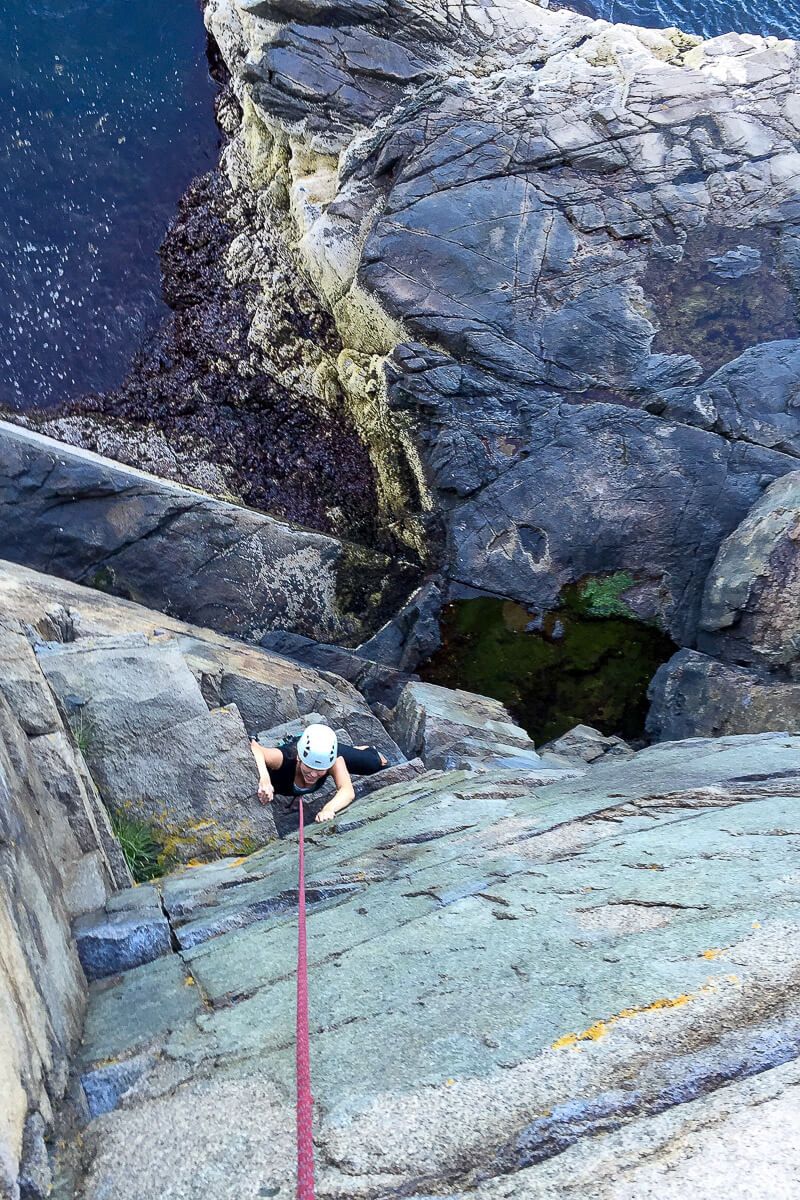 I turned and started to climb again. But each hand hold seemed a farther reach. And each foothold smaller. By the time I was 2/3 of the way up, my hands were slipping with each placement. And one time I did lose my grip completely. I didn’t even fall at all since Matt was right there, cinching the rope with each inch gained to help me.

But as I gripped the wall again to keep trying, we both knew I was done. My hands were shaking with exhaustion, I was sweating, and I was starting to lose confidence. (This last one being the death knell to anything I do.)

He looked over the cliff edge down to me. “Do you want me to pull you up?”

I couldn’t even look back at him. My eyes glued to the rock in front of me as I opened and closed my hands. I hung my head and admitted defeat, “Yes.”

It took him a couple of minutes of prepping before he starting hauling me towards the top. And swaying there in the breeze was probably the 2nd most terrifying part of it. Especially since as he adjusted the settings at the top, I slipped 5 inches.

I stifled my shriek as Matt reassured me that he would be pulling me up soon.

Within moments, I was hauled upwards and over the top. Scrambling for solid, secure ground. But I had attempted it. I had tried. And maybe, just maybe, if I tried again, I would make it to the top by myself.

On the way back, Matt reassured me that I did great. And that my last climb at Otter Cliffs was a more moderate climb. He explained that the easier ones were already occupied when we got there, so he had thrown me at this one. And I had made it almost to the top.

But somehow this didn’t faze me much. I had gone rock climbing in Acadia National Park. I had been that climber on the brochure dangling over the water. And though my arms ached like crazy the next day, the exhilaration I felt for conquering those cliffs was well worth it.

When to schedule. Make sure to call or head into the office early in your trip. Either the first or second day. This is a fairly popular activity and there are only so many guides. You may have limited availability on when you can go. Plus if you need to re-schedule for weather (like me), you’ll hopefully be able to.

Who to go with. There are two companies in Bar Harbor. Acadia Mountain Guides and The Atlantic Climbing School. I went with the former solely because they had slightly better prices when I called. Both seemed great and both use the same spots around the park. If you are having trouble booking a trip with one, make sure to check the other’s availability as well!

Prices. This is not a cheap excursion. Especially since I was just one person climbing. My ratio then was 1:1 with the guide. If you have more people in your group, the price is reduced per person. I also only did a half day which was perfect for me since I don’t think I would have had the upper body strength to do much more than what I did. Find prices for Acadia Mountain Guides here!

Transportation. To go to the various climbs, we used our own rental car (with Matt in the car with me). If you don’t have your own rental or aren’t willing to use it, make sure to bring this up when you schedule your climb.

Acadia National Park Pass. Obviously these climbs are in the national park and you’ll need a pass to get in. We already had one for the week, but if you don’t, this will be an extra expense. You can get a weekly pass for your car (this covers everyone in the car). See information on prices & fees here. 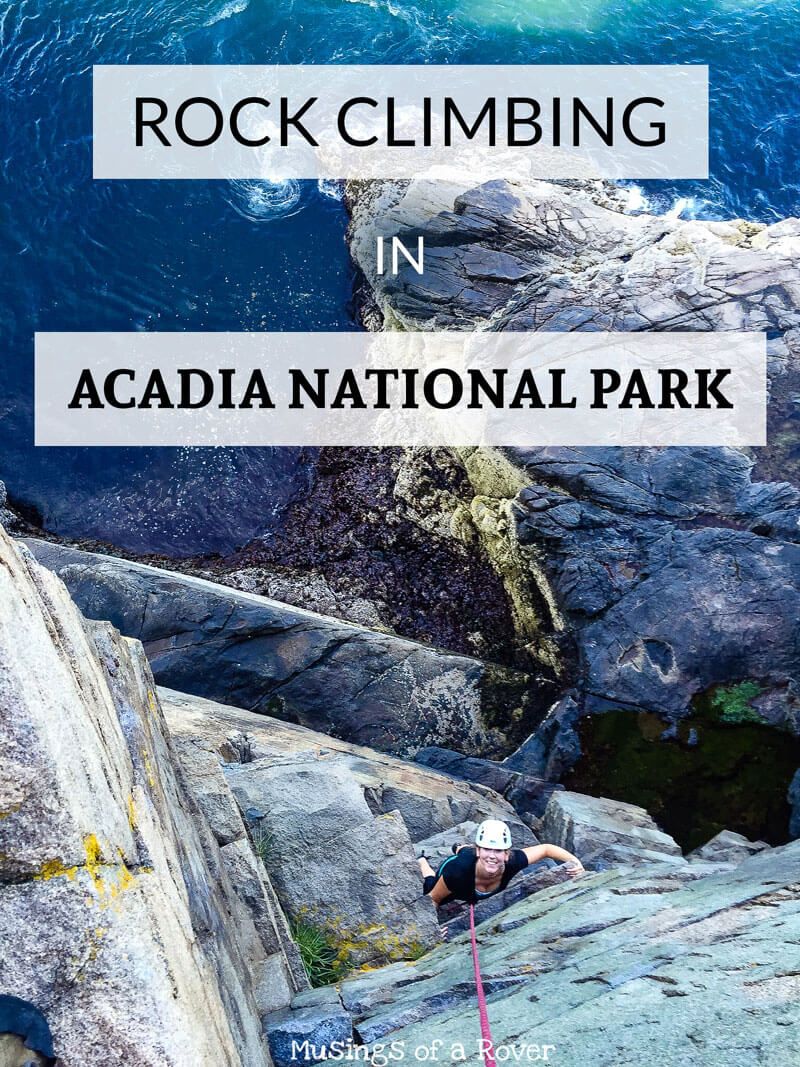 Experience Acadia: 5 Awesome Things To Do in Acadia National Park