Originally I had designated the National Palace as the third place to see on our daytrip to Sintra (and thereby basically marking it as a no-go). I needed to see the Castelos dos Mouros, even in the rain, and I kind of also wanted to see how wacky Pena Palace really was. But plans change and Pena Palace got bumped, and we had a couple of hours to kill before heading back to Lisbon. So why not give the Sintra National Palace a chance? 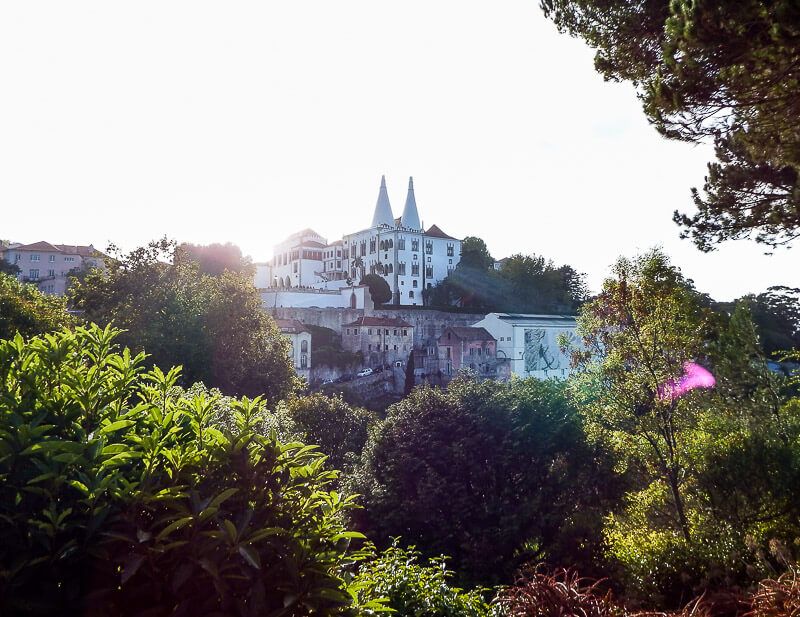 The Sintra National Palace is for the History Nerds

This was the reason I fell in love the National Palace, and it all boils down to two reasons.

For one, the National Palace is the best preserved medieval royal palace in Portugal. Its structure has basically remained unchanged since the 16th Century. And two, it is the most lived in of all the royal palaces in Portugal. Kings and queens made the Sintra National Palace their home from the 15th to the 19th century, at least in the summer months to escape Lisbon’s heat.

So basically, the National Palace is a must-see for history nerds…like me.

The foundations of the National Palace began over a thousand years ago when the Moors controlled Sintra. And though the palace fell into the hands of the Portuguese Royal Family, the structure and decor of the palace has maintained its ties to its Moorish roots.

The first king to set his eye on improving the palace was King Dinis (13th-14th century). The main surviving feature from this time period is the Chapel. In particular the tiled floors and the wooden ceiling are some of the oldest examples of Moorish craftsmanship in Portugal. 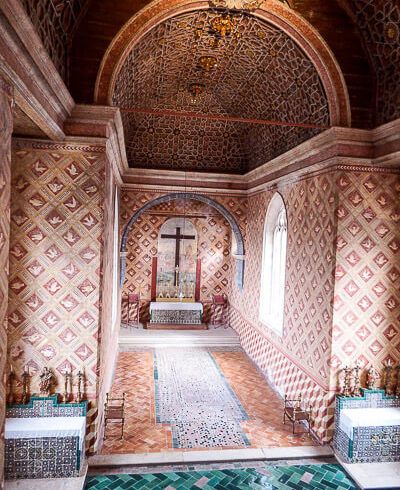 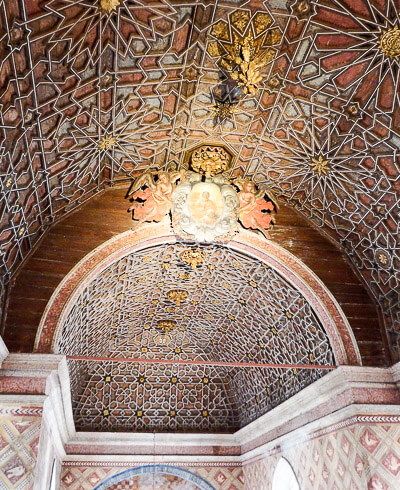 (Now you may be wondering…weren’t the Moors kicked out? Kind of. During this time period, King Dinis commissioned free Moors living in a neighboring village to conserve and renovate the palace.)

However most of what you see today (and some argue all of what you see today) is the result of King João’s renovations in the early 15th century. The main thing King João wanted? A new front porch basically. Oh and a grand entrance/banquet hall decorated with swans. (Because who doesn’t want swans looking down on them for eternity? No one, obviously in King João’s mind.) 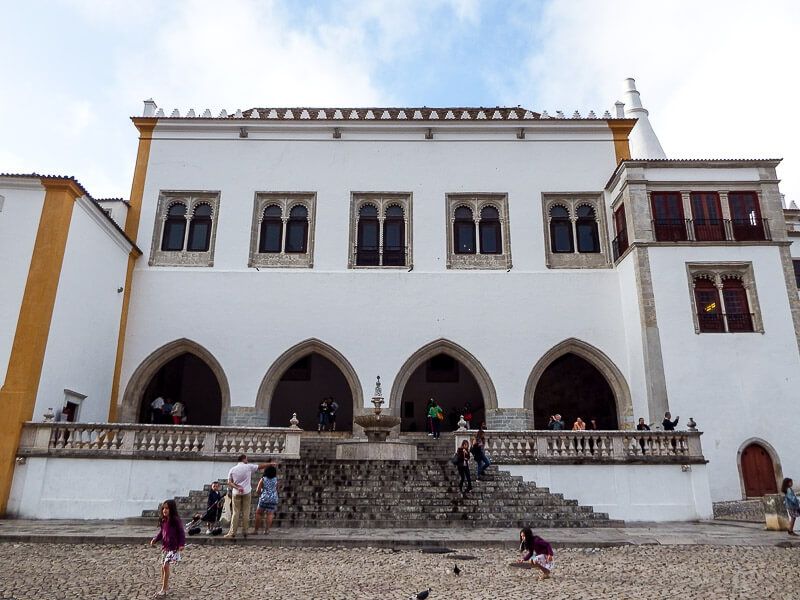 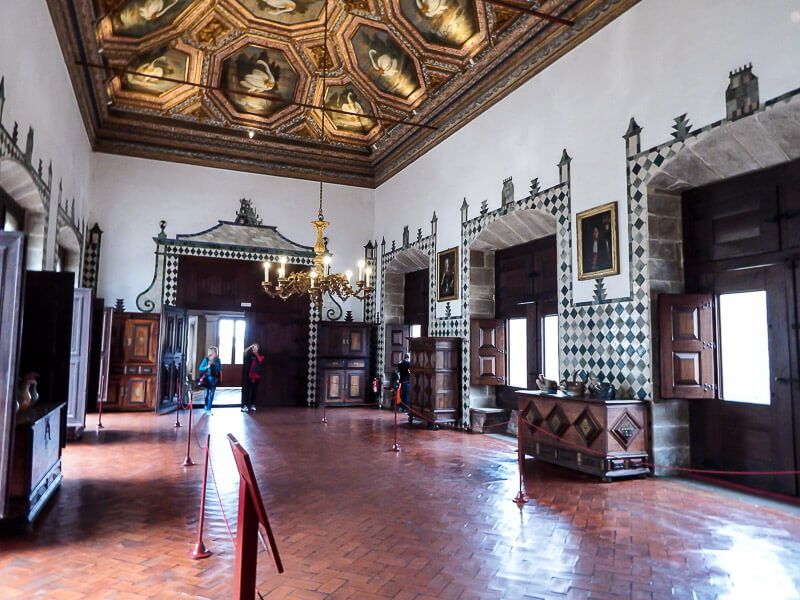 King João also built a series of rooms connected to this grand hall, including the Magpies Room. This room is where important dignitaries and ambassadors were received in the palace. But there is more to this room than meets the eye – especially why the room’s ceiling is decorated with Magpies (maybe King João just liked birds?). The story surrounding the room involves King João and one of his Queen’s ladies-in-waiting.

Some say the King tried to attract a lady-in-waiting by giving her a rose, but it was snatched by a magpie, others say the King kissed a lady-in-waiting and was caught. Regardless, gossiping ensued and the King had the room decorated with 136 magpies – one for each of the women at his court. This was the King’s way of saying that the women chattered like magpies (which I guess are very loud birds). 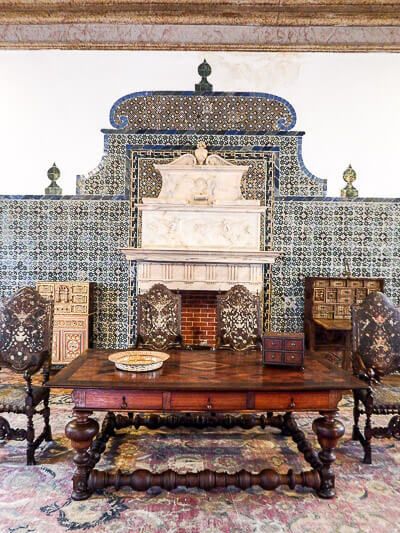 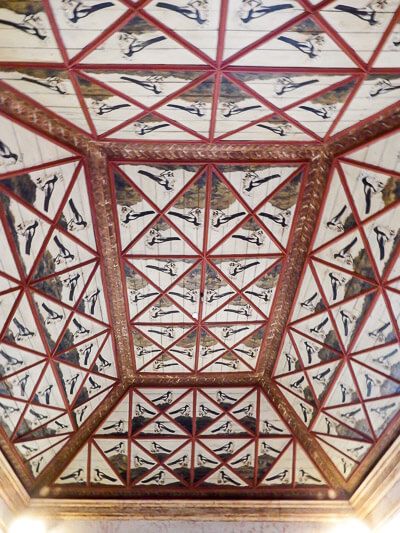 But one of the most important improvements King João made to the palace was the kitchens. The chimneys from these kitchens (the large, cone like structures that tower over the Palace ) have become not only an icon for the the National Palace, but for Sintra itself.

The last King to make several changes to the Palace was King Manuel I in the early 16th century. He constructed a whole wing to the palace (Manuel’s wing) and the Coats of Arms Room (my favorite room).

Though other Kings & Queens lived in the Palace, few made any improvements to it besides bringing in their own decorations and furnitures. This thrilled the history nerd in me. It felt amazing to explore the Sintra National Palace knowing its structure has remained unchanged for almost 500 years. 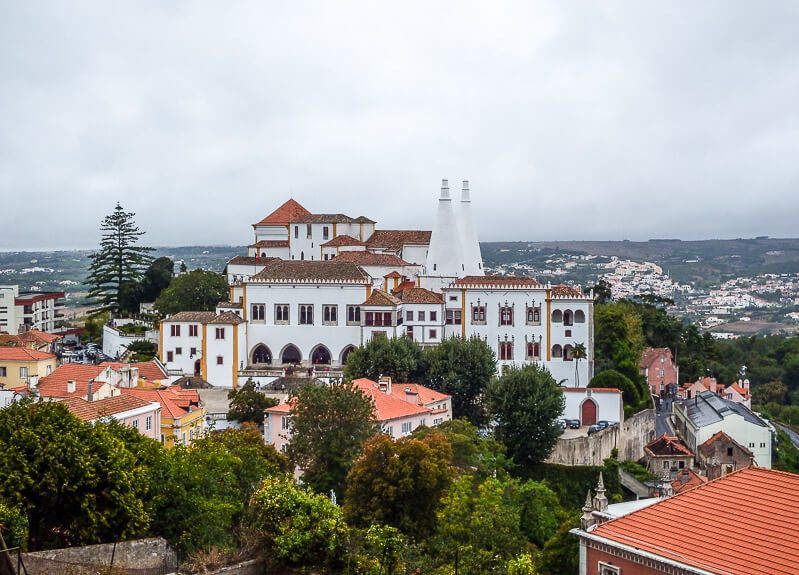 What if history’s not your thing? Well, I have a feeling the art and architecture of the Palace will impress you. Because of its expansive history, the National Palace not only contains three distinct styles – Moorish, Gothic, and Renaissance – but it blends these styles together. And it blends them beautifully.

This beauty of the National Palace astounded me. Maybe that’s because I haven’t seen a lot of palaces and castles in Portugal and Spain, but I was amazed that each room, wall, window, ceiling, doorway, and floor was decorated with extreme detail.

So even if the history of the place doesn’t wow you, the Palace itself definitely will. Below are some of my favorite rooms and features of the palace.

Built by King João, the Swan Room is the largest of the Palace’s rooms. And though its name was originally the “Great Hall,” today it’s known by the bird that decorates its ceiling. 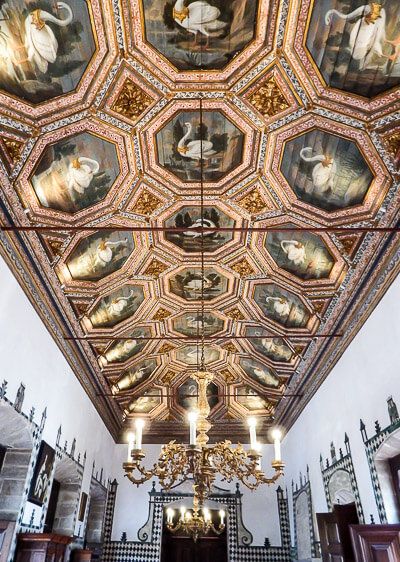 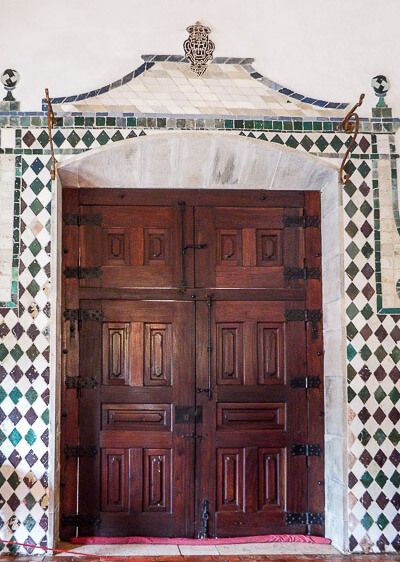 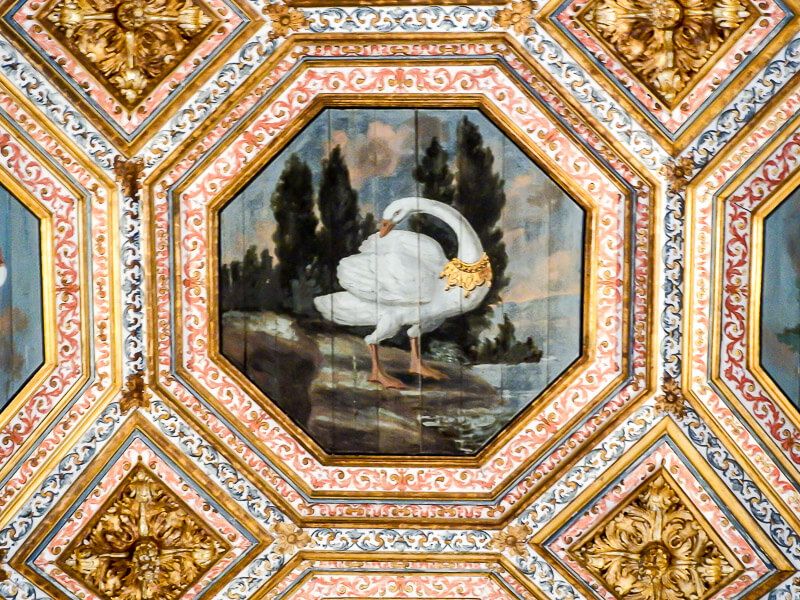 The Arab Room was King João’s bedroom and it was placed the furthest away from the Swan Room for privacy. He also had a really cool statue built right in the center of his room. Baller. 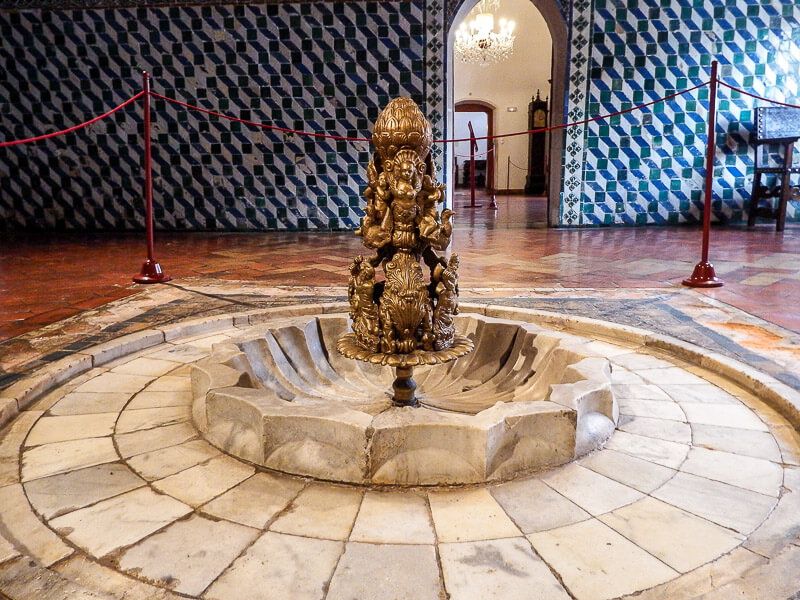 Though this room was built by King João, it was used by King Sebastião as his personal bedchamber in the late 1500s. 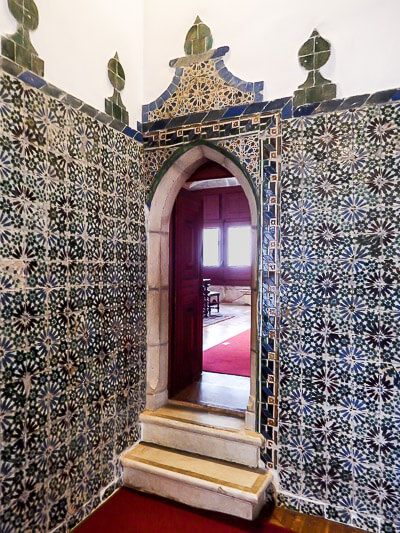 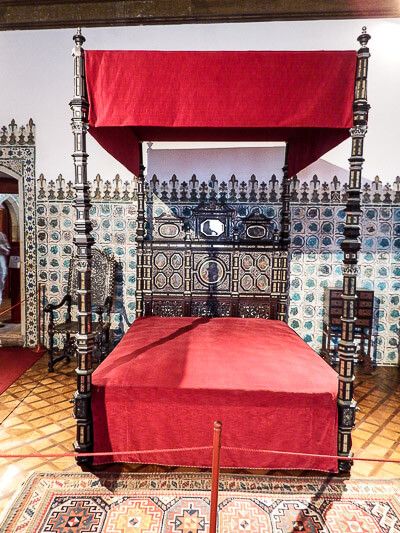 There isn’t anything too significant about this room, but I still really liked it. Featuring furniture and artifacts from the Palace’s history, the room is also topped with a domed ceiling painted with ships from the 17th and 18th centuries. 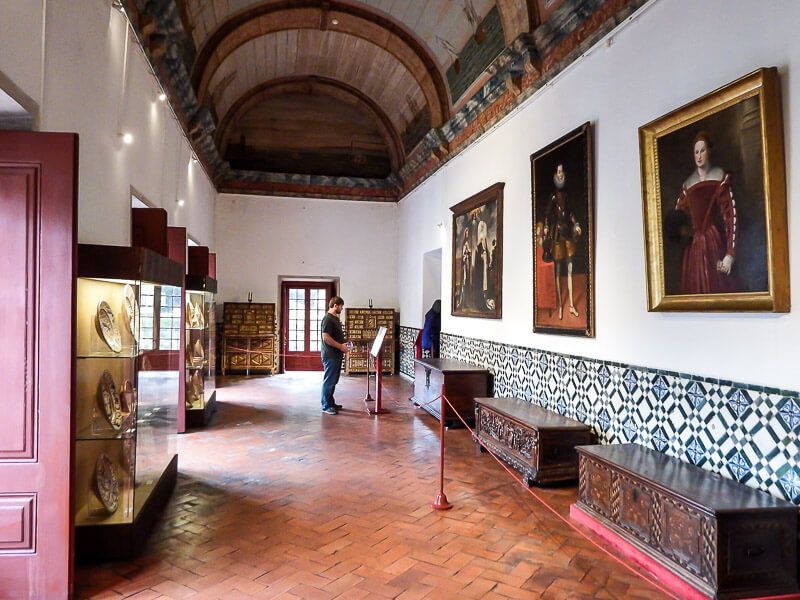 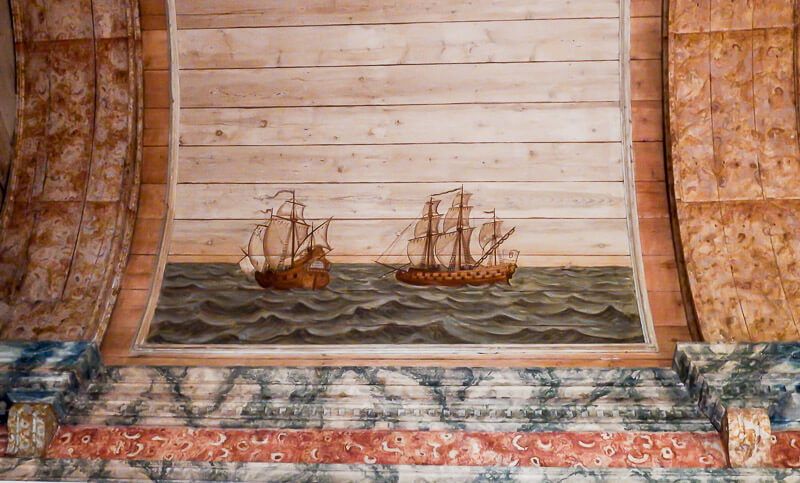 The Palace’s ties to its Moorish roots have always been strong. The existence of the courtyards and patios (where running water could be heard), the walls and floors covered in tiles, and the arched windows all show the Palace’s attachment to its Moorish origins. 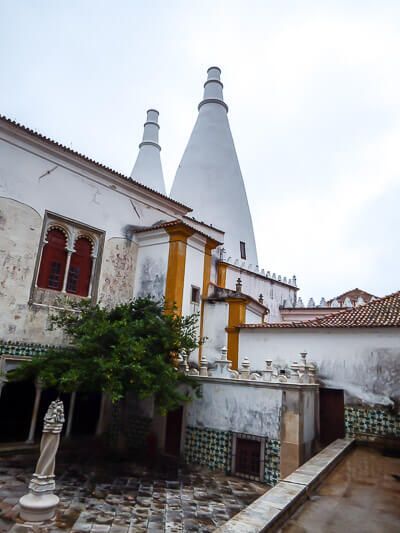 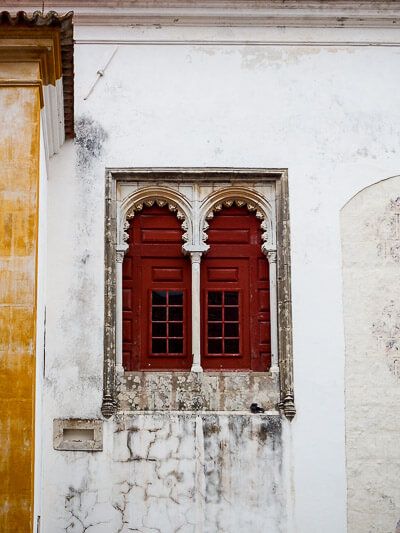 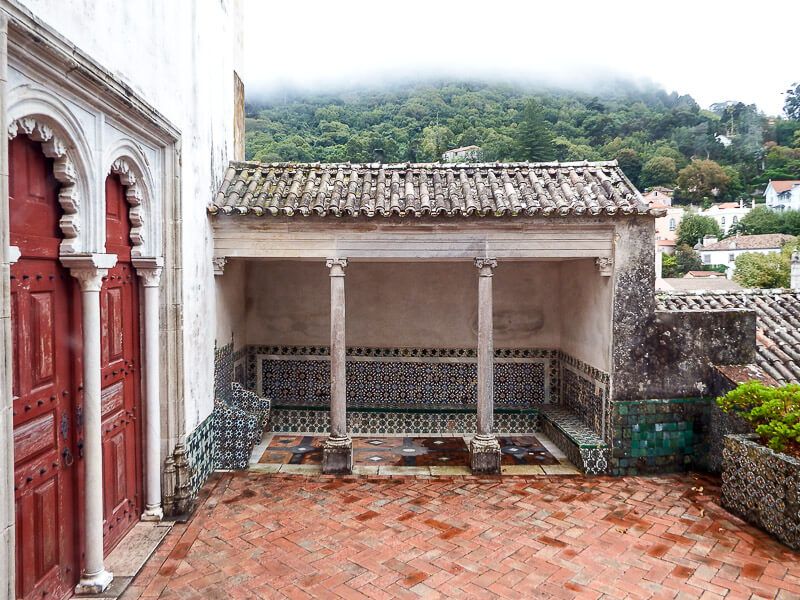 The Coats of Arms (or Heraldry) Room

This was my favorite room. Built by King Manuel, the ceiling displays the Portuguese royal arms, the coats of arms of King Manuel’s children, eight large stags, and 72 coats of arms from the kingdom’s noble families. Because the room dates back to the early 1500s, it is considered one of the most important heraldic rooms in Europe. The walls of the room are also decorated with blue and white azuelos from the 1700s. 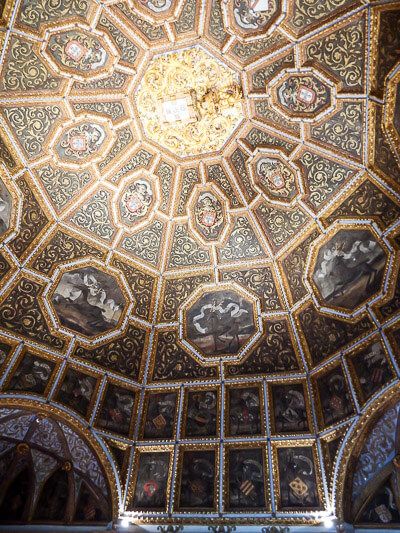 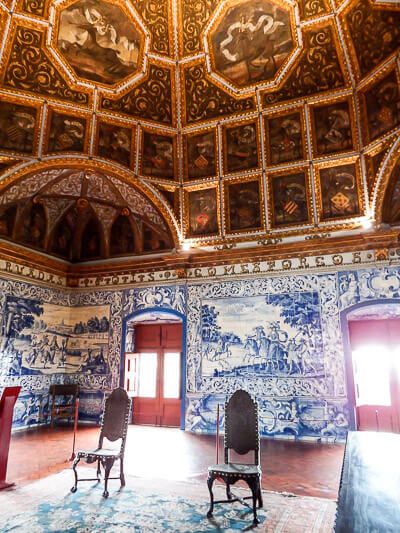 I’m not going to lie. This was the main reason we choose the National Palace over Pena Palace. After journeying through the rain and fog to the Moorish Castle perched high above Sintra, we wanted to see one last Sintra palace, but we wanted it to be an easy journey. Did we want to hike even further away from Sintra to the Pena Palace or did we want to head back to town and stop into the National Palace?

Wet, hungry, and with tired feet, we choose the latter. We never regretted that choice.

The Sintra National Palace is massive, historic, beautiful, and convenient. It’s located in Sintra-Vila – not perched on top of a mountain. The walk from the train station is a fairly level 1km stroll. Across the street are open-air restaurants, shops, and pastry shops (where I definitely scarfed down some pastel de natas).

Strangely also the National Palace wasn’t that busy. There were a lot of people in the courtyard and the ticket line but the Palace wasn’t swarming with tourists. I’m not sure if this is because it’s not as popular or because it was raining, but it was really nice. 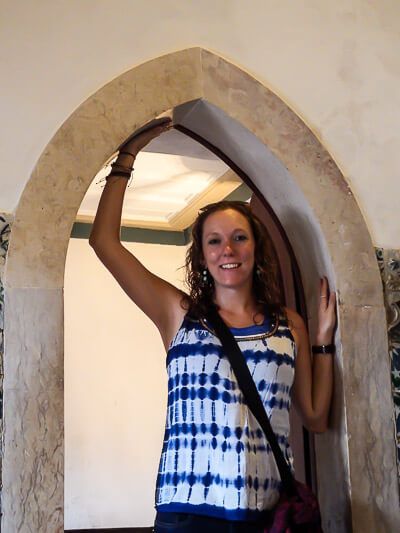 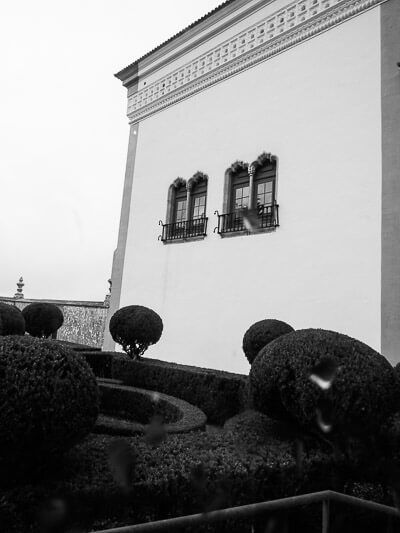 I’m so glad we didn’t skip the National Palace. It’s a Palace with Moorish origins dating back a thousand years, that has been expanded by various Portuguese Kings, and that’s filled with intimate courtyards, decorated with beautiful azulejos, and topped with iconic chimneys. All of these characteristics make the National Palace Sintra’s Palace. And it’s one that’s definitely worth a visit if you’re into history, art, or architecture. Or even if you just want to visit somewhere that’s historic, beautiful, and convenient. 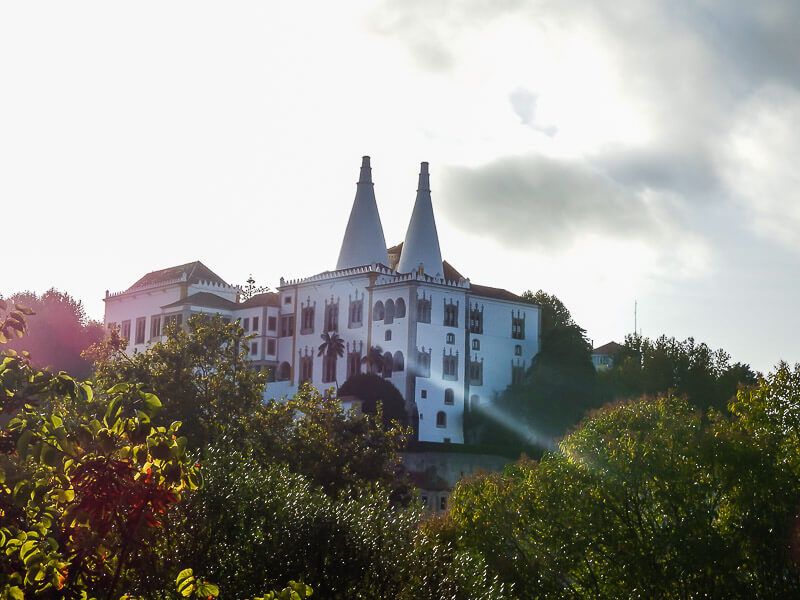 – What appeals to you the most about the National Palace? History? Art & architecture? Or it’s convenience? –

Cost. €10 but there are discounts for children and seniors. If you plan on visiting multiple Sintra sites, consider buying a combination ticket. Just ask the ticket office for details.

How to get there? Walking from the train station is definitely the easiest. It’s only about a 1km jaunt and you get a great view of the palace on the way. Check out this Google Map for the walking path. (Note that Google may give you a “faster” path if you search for it on your own, but this path cuts down into and out of a ravine, which may not be worth the 3 minutes Google says you’ll save.)

You can also take a bus. The Scotturb 434 & 435 both stop at the train station and Sintra-Vila (right near the National Palace).

Alternate names. There are a lot of names for the National Palace. Here are the others in case you hear them: Town Palace, Palácio da Vila, & Paço da Vila.

History. For more information on the history of the palace, check out Parque de Sintra’s website.

Camilo Beach: The Beach I Had to See

20 Photos Of Portugal That Will Tempt You To Visit