Sunburned after only a day and half in Maui, I knew I needed to take an easy on my second afternoon. I had spent that morning basking in the sun from atop a surfboard, and now I needed just a little bit of respite from the beach. Or at least my reddening face did. And so we looked towards Maui’s Upcountry to the Surfing Goat Dairy Farm and Ocean Vodka Distillery.

With only half the day left, we knew our tour of the Upcountry would be limited. Most of the farms close in the early evening and the tours end by the mid-afternoon. So we decided to hit up two of the farms that were closer to the bottom of the mountain. I wasn’t disappointed though. Surfing Goat and Ocean Vodka were the two Upcountry spots I wanted to see the most.

I mean, come on, it’s vodka and cheese – two of my favorite things in the world. 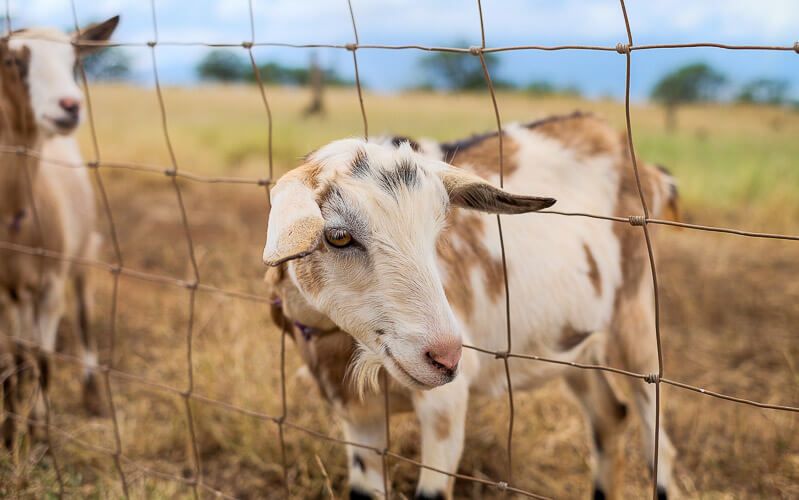 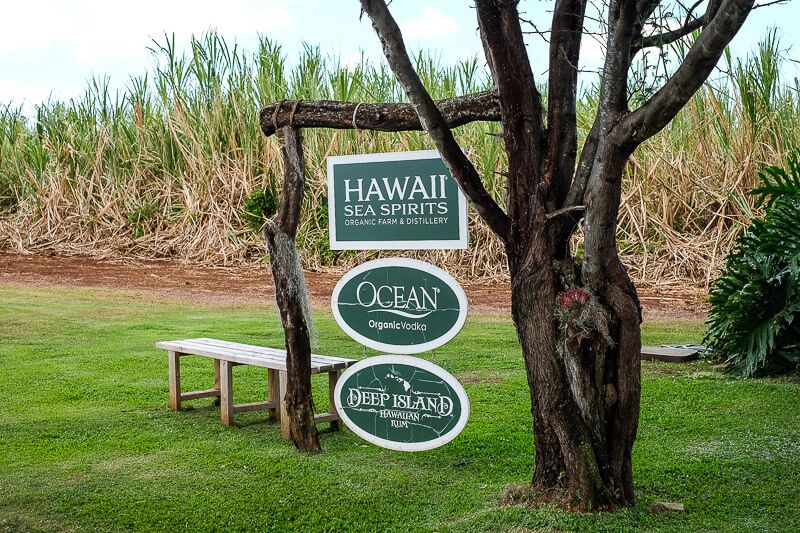 We headed to Surfing Goat Dairy first. The parking lot seemed full and we were worried we would have to wait for a tour. We quickly found our way to the “store” and stood in the haphazard line. After defending my spot, I got us two tickets for one of the casual 20 minute tours.

Surfing Goat Dairy is a 42-acre farm that makes (you guessed it) goat cheese! They have all the goats on site and they do all of the milking there too. There’s a small shop and they run several tours (the cheapest and most common being the casual tour we did).

We lucked out and scored spots on the tour that was starting in 10 minutes. If we had missed it, we would have had to wait another hour! Our group was mostly made up of kids and their families, but there were a couple of adults mixed in too. 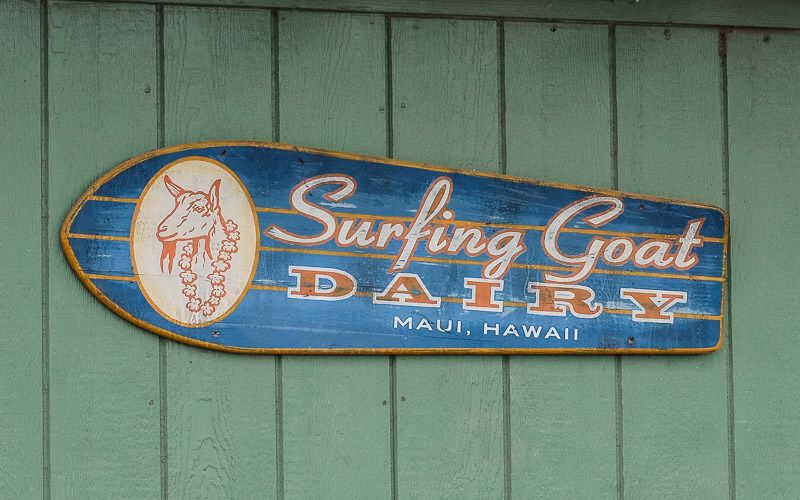 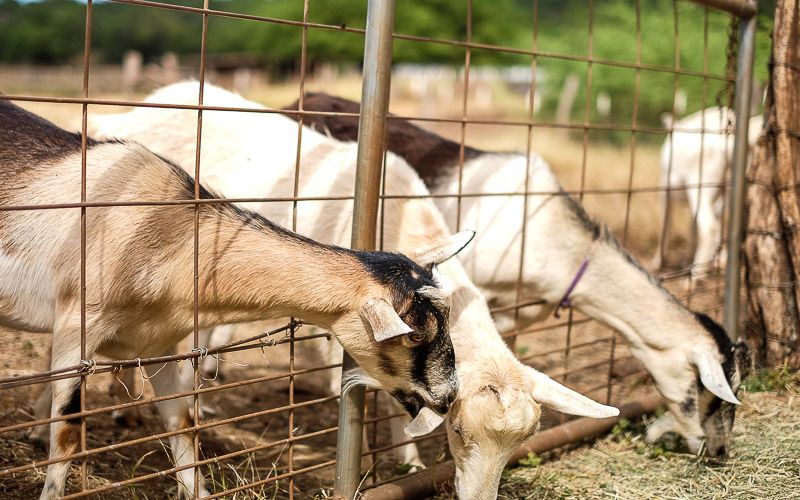 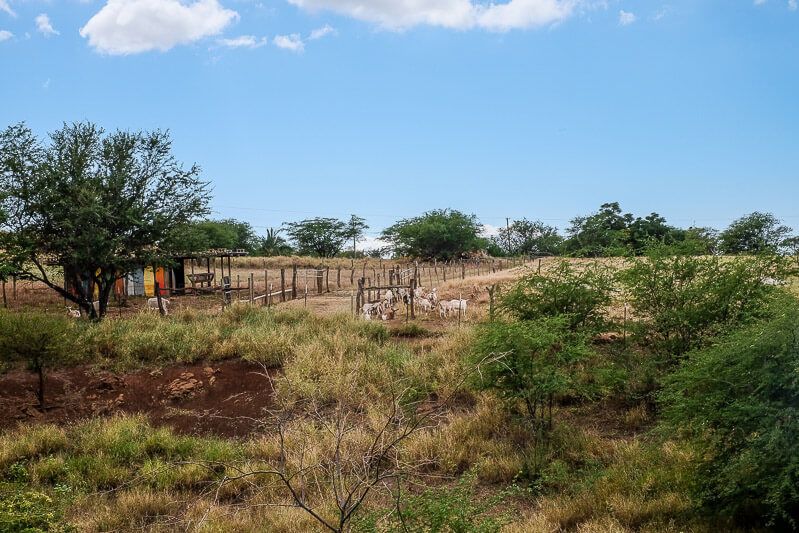 The tour started off with a meet and greet with the goats. Our friendly guide led us away from the center of the farm and out towards the fields. She filled us in on the workings of the farm along the way (how long the farm had been around, the number of herds they have, what they do with all the baby boy goats, etc.). But all of our eyes were glued to the goats swarming towards us as we approached.

They seemed to almost attack the wooden fence as they reached it. They stood up against it, each goat leaning out towards the waiting guide. Too many heads to count reached for us, their mouths already working in anticipation of the hay we were going to give them.

And then that’s when we heard it – CRACK! The wooden fence shivered under the pressing weight of the goats pushing against it.

Two dads in our group immediately put their weight on the posts and leaned into it, but the fence wasn’t shifting back up. In fact it seemed to sway towards us again.

The goats were getting closer to their meal.

Panicking, our guide quickly herded us away from the crumpling fence. “Here!” She yelled, banging the buckets of food. She assured us that the goats would follow the food (and therefore abandon the shaky, wooden fence).

And they did. Our guide led us to the metal part of the fence and the goats followed. As the last one jumped down and ran away, the pressure on the fence released and it seemed to settle back into place.

Now they attacked the metal fence…but it could withstand them. 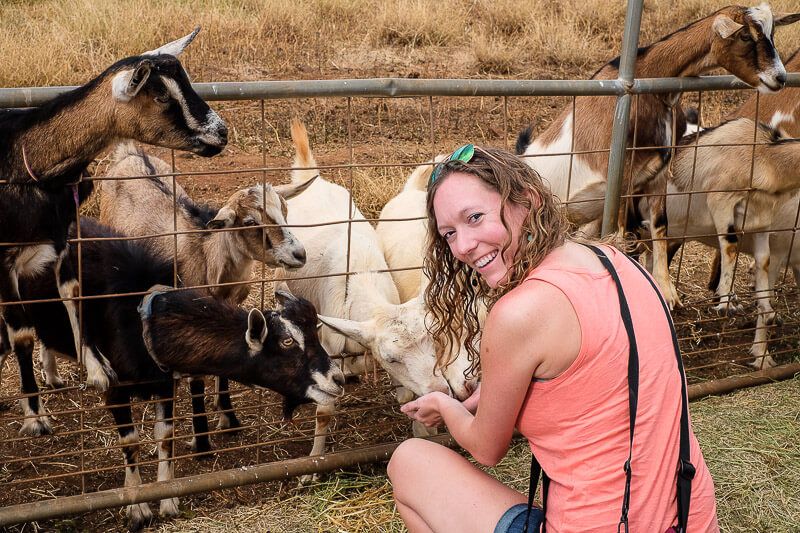 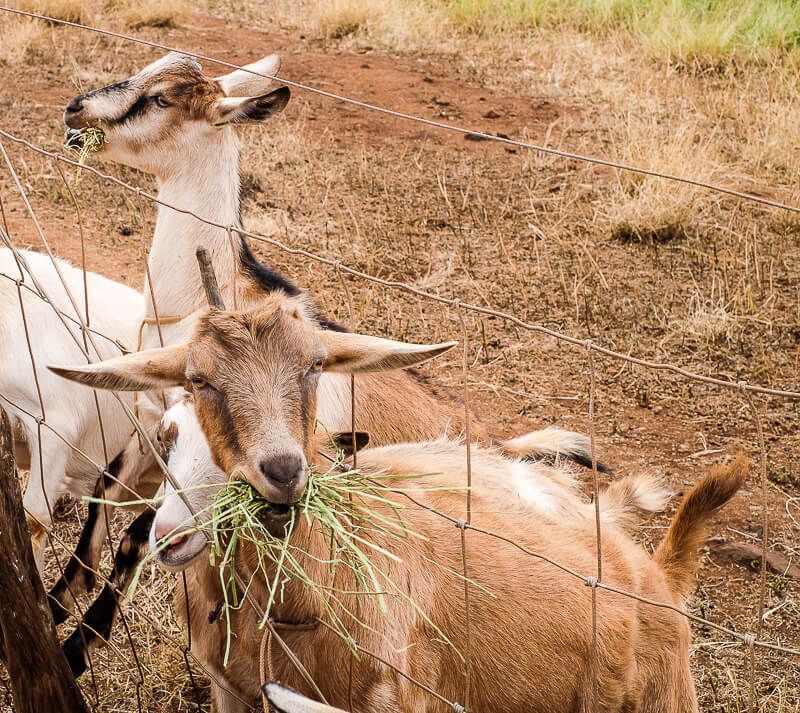 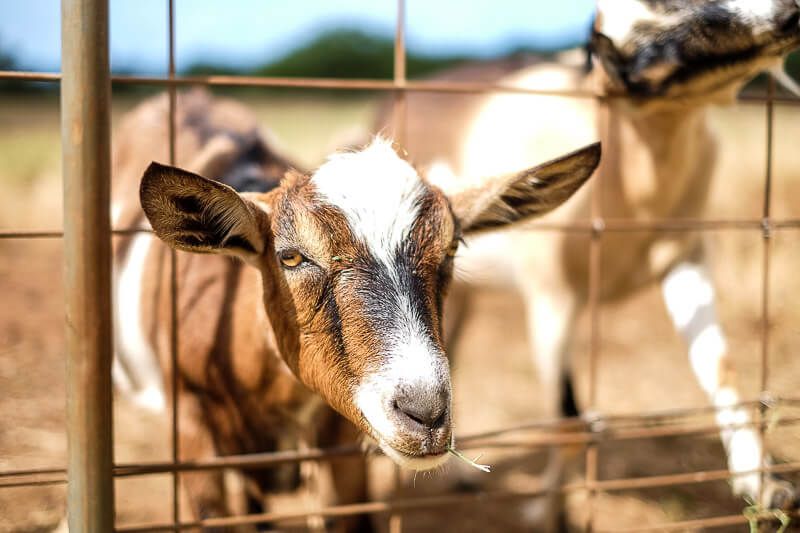 Grabbing fistfuls of hay, we could now feed these hungry beasts. Goats pushed each other out of the way, trying to reach the hay we held out to them. Heads squeezed through the gaps in the fence to reach the feed that dropped to the ground.

Surfing Goat Dairy keeps the pregnant goats away from the others, and across the aisle, these mommy-to-be goats bayed at us. And one pregnant goat in particular was extremely hungry. You could see the need in her eyes. She pushed the other mommy goats out of the way to get at the hay I offered her. 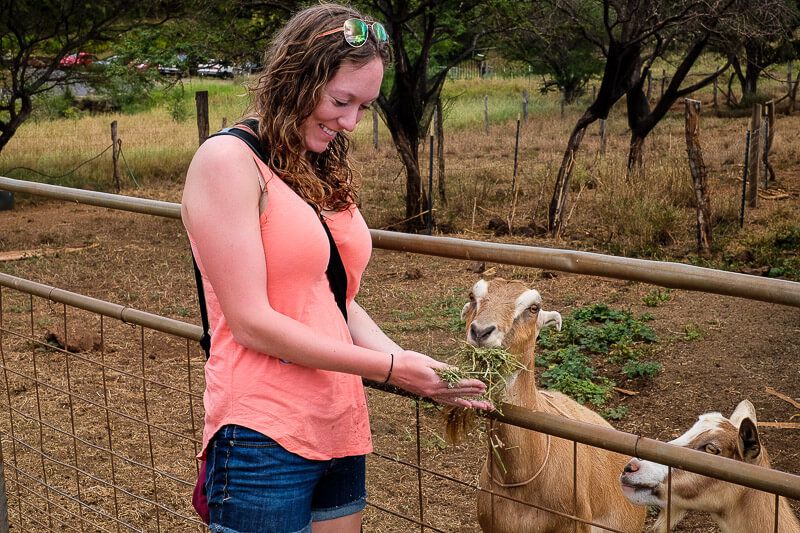 Soon the last of the hay was gone and the buckets were empty. Sensing that the meal was over, the goats started to wander away from us and the fence. The kids in our group looked longingly after them, but the goats go where the food is. And at that moment, their closest food was the grass in the field.

Our guide then led us away from the fence and back towards the barn. Here we got to see a behind-the-scenes look at the milking operation. While we didn’t get to see any active milking (I think it happens in the morning), we did get to see all of the equipment and hear about the processes that go on year round on the farm. 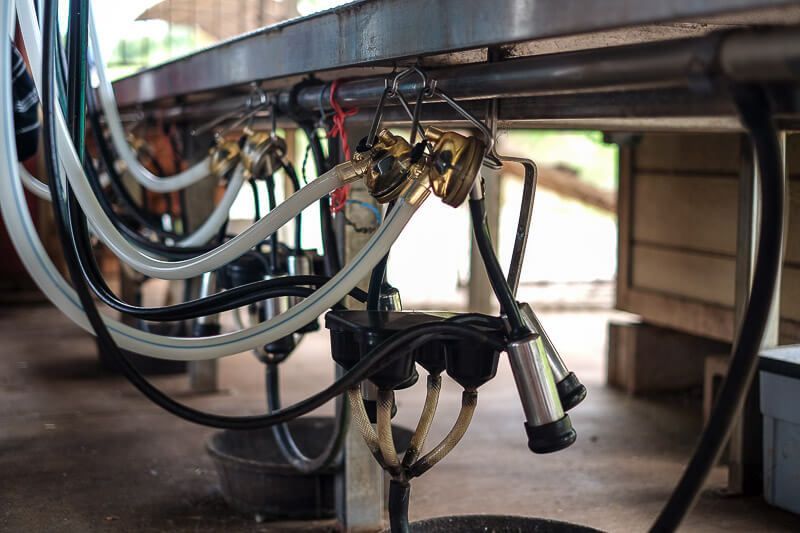 But the best part of our visit? During our tour, four baby goats were born! They brought each one out one at a time and placed them in a small enclosure near the barn. Because we were on the tour, we got a much closer look.

And I do mean baby goats. Like these were fresh out the goat baby goats. They still had…stuff on them that a woman was wiping off. 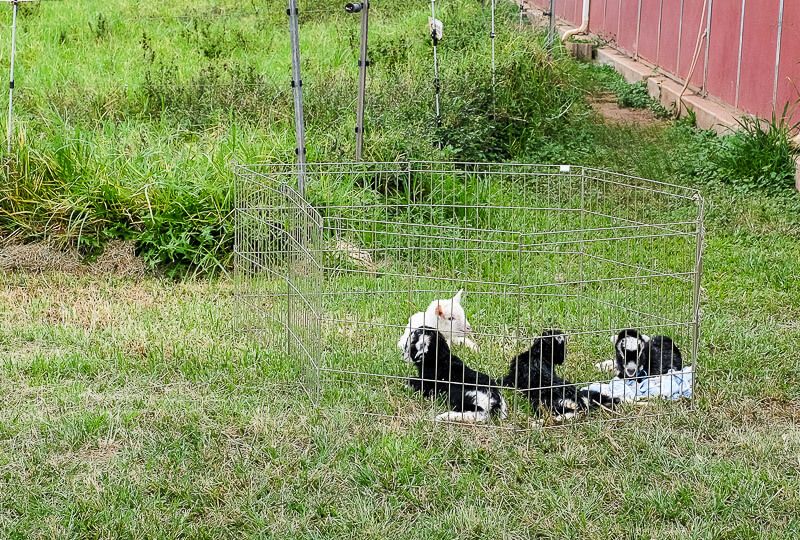 The only sad part is that the babies are immediately separated from the moms. But it is a working farm. And goats only produce milk after they’ve had a baby. I made the connection but a couple of the kids in our group didn’t really understand why the mommy goats weren’t around.

Then came the fun part…tasting the goat cheese! The tour concluded with several samples of goat cheese. Some were plain. Others were flavored. But they were all delicious.

But I do think that goat cheese is definitely something you enjoy more as you get older. The kids in the group wrinkled their noses at the cheese, the teenagers ate it but didn’t look too impressed, and the adults were going ga-ga over all the flavors.

I definitely fell into the latter category.

Before leaving Surfing Goat Dairy, we decided we needed to try just a little bit more cheese, so we splurged for a goat cheese panini. And as you can see, I don’t have any pictures of it. Once it came out, I had eaten it before I realized what happened. 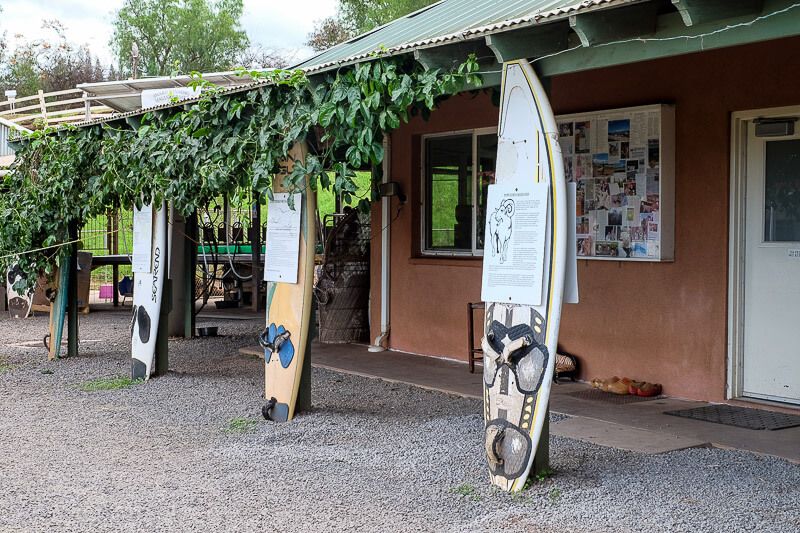 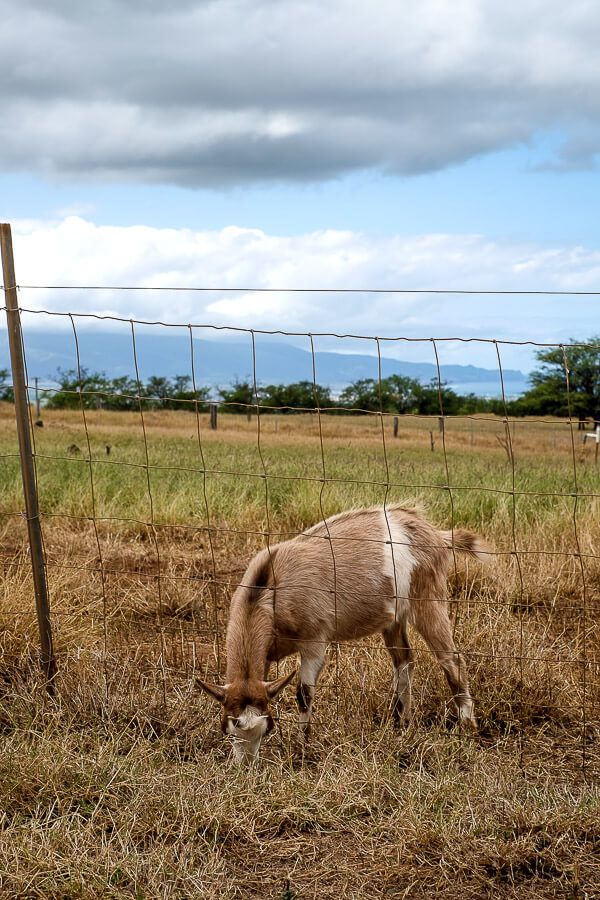 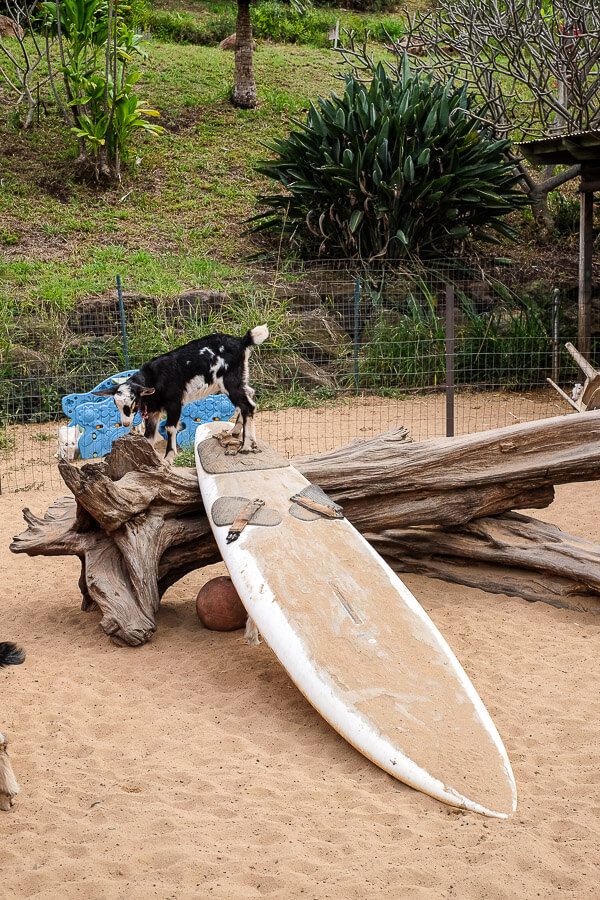 After filling ourselves up with goat cheese, we headed to Ocean Vodka. While the facility is now technically known as Hawaii Sea Spirits Organic Farm & Distillery, Ocean Vodka is still their main product.

The Ocean Vodka Farm is spread over 80 acres and it is completely organic and environmentally friendly. They don’t use any pesticides or fertilizers, and they harvest the sugarcane by hand. This keeps the “baby” sugarcane intact so that it can continue to mature. No burning happens here. (That’s how sugarcane is usually harvested – by completely burning the field.) Even their bottles are made from recycled glass and this was such a nice touch that I simply fell in love with the company more. 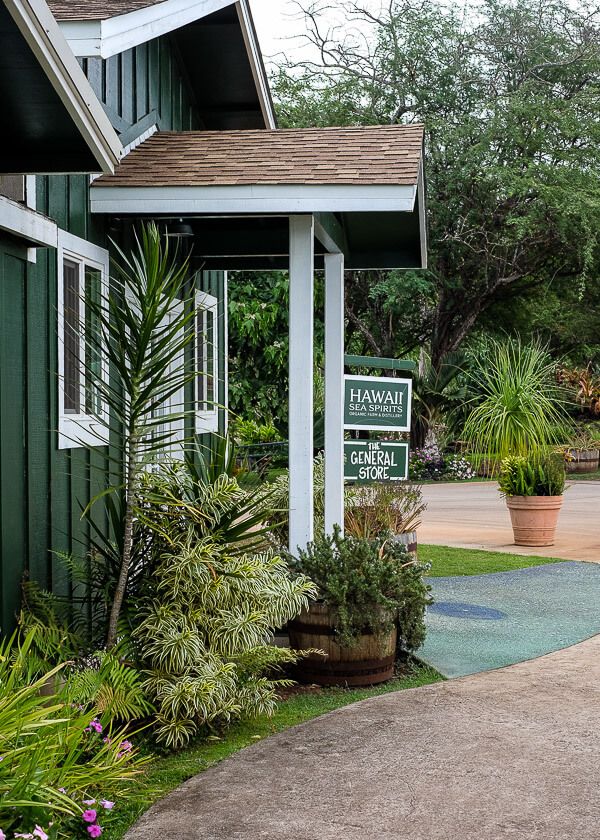 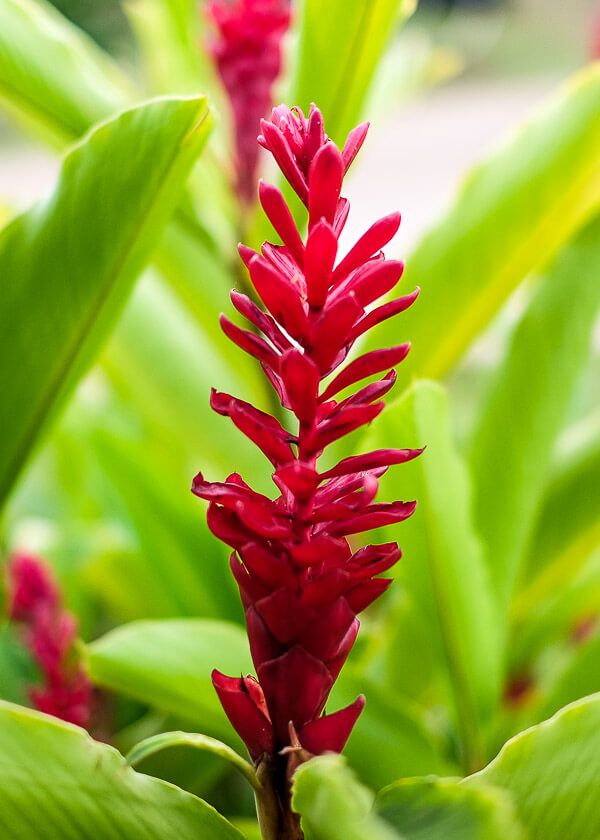 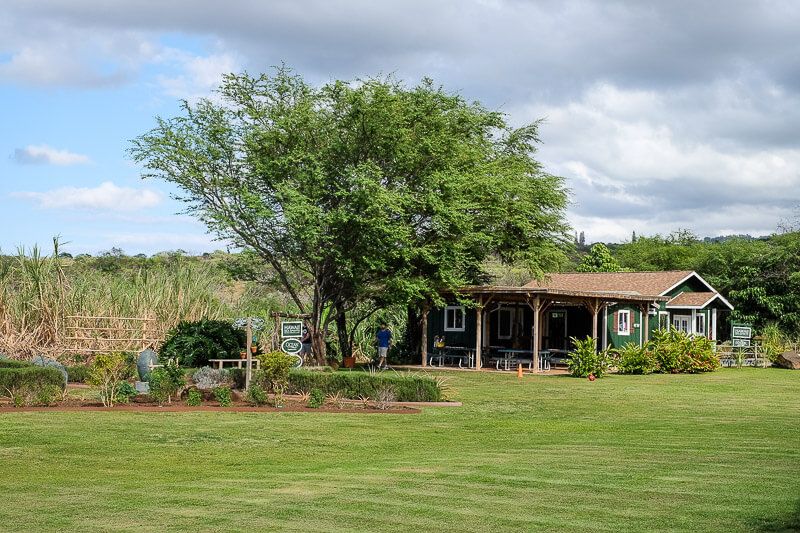 We immediately headed inside and booked a tour. In comparison to the Surfing Goat Tour, this one was solely made up of adults (kids can go on the tour but they obviously can’t taste). And it was a lot smaller.

Our tour started with the sugarcane itself. She led us away from the facility to the rows of sugarcane surrounding the farm. Instead of just one kind of sugarcane, the farm grows and harvests dozens of species of native Polynesian sugarcane. The difference between each kind was remarkable. Some were a bright yellow, others a red so dark they almost looked purple or black. Some plants were tall, reaching high over my head. Others were squat and wide, fat with the number of canes it held.

And all the different kinds are used to make the vodka. 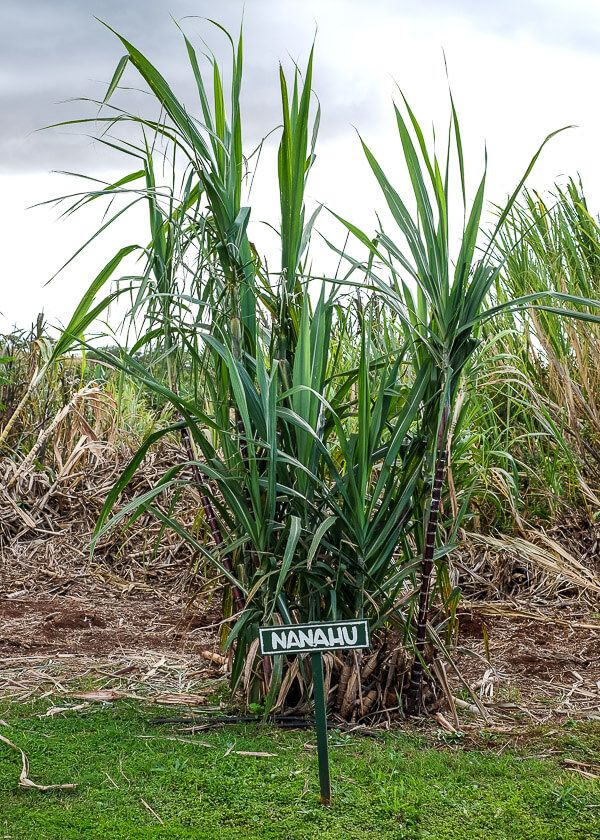 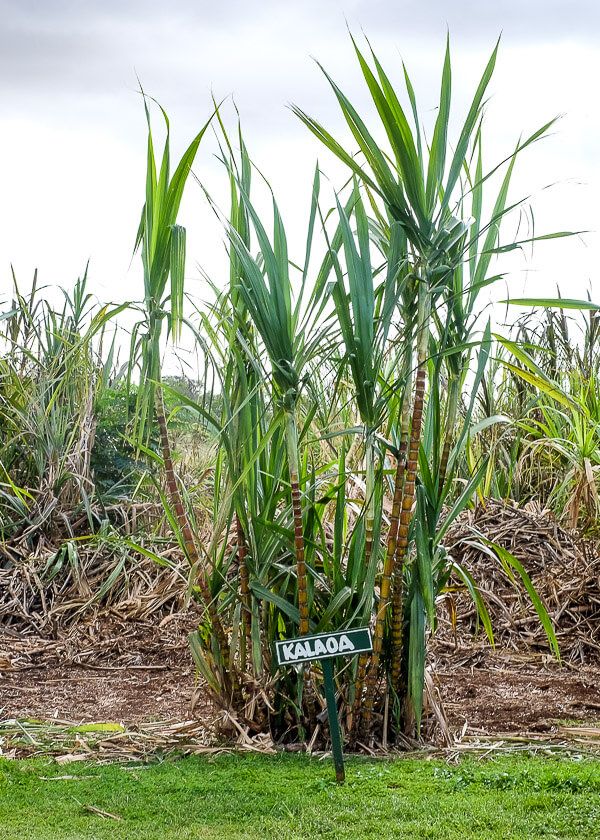 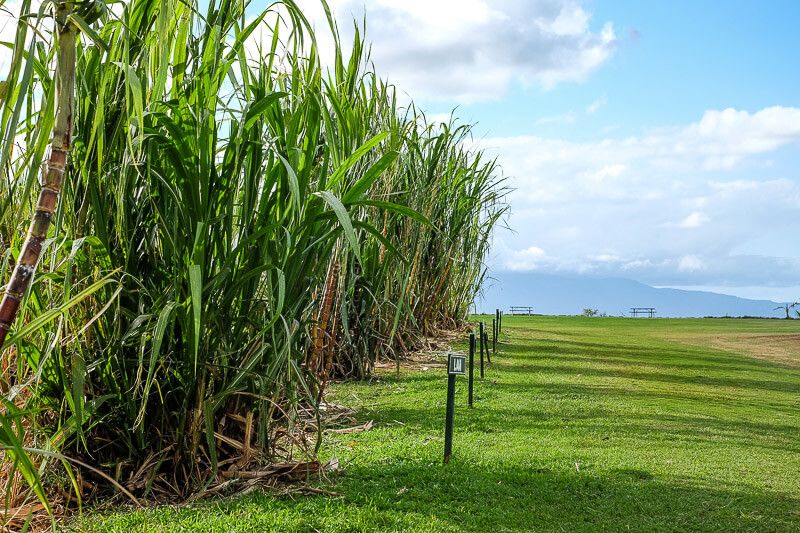 Then we headed into the facility itself. Here we learned about the continuous column distillation, which is a much finer process than the normal pot still. We also were able to see the HUGE cardboard containers of water they bring in (more on that soon). And lastly, we saw the active bottling process. That day they were filling the small, airplane sized bottles. Ocean Vodka is the exclusive vodka on Hawaiian Airlines.

Then it was time for the tasting. We started with the water first.

Yes. Water. It is one of the most important ingredients for Ocean Vodka. Because, think about it, if your vodka is 80 proof (40% alcohol), then 60% of your vodka is water. I never thought about it like that. Ocean Vodka exclusively uses deep ocean mineral water. But what does that mean? It means that they source their water from 3,000 feet below sea level (off the coast of the Big Island). And it’s full of healthy minerals. So much so that this water goes for $20 a bottle in Japan!

And guys – you could taste the difference. The water tasted thicker. It slid down my throat in a way that’s hard to describe. 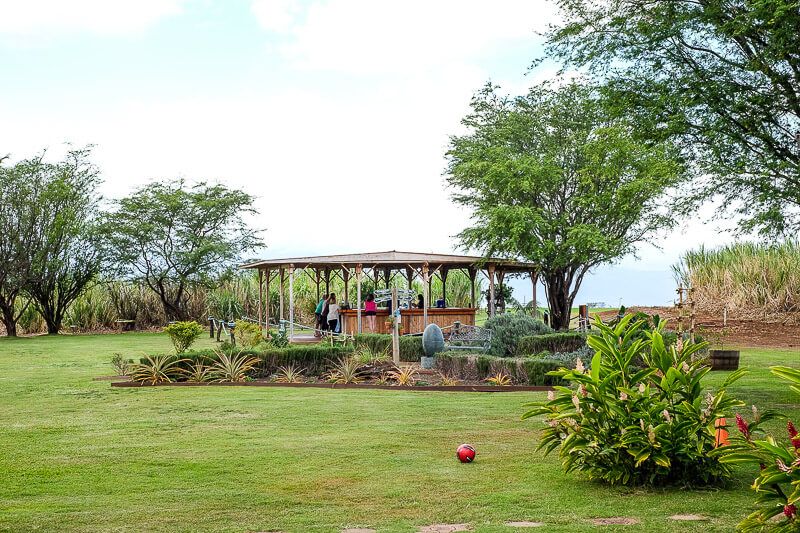 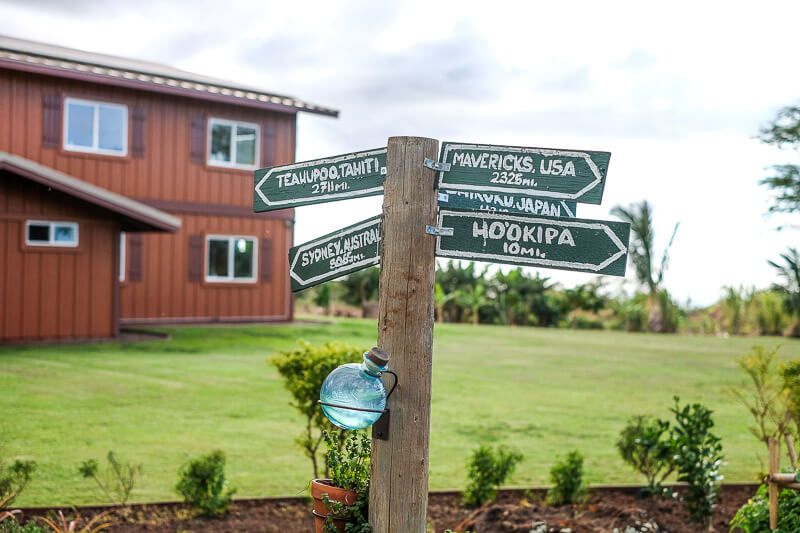 Then it was time for the rum! Wait…rum?

Yes! Rum! The company is called Hawaii Sea Spirits because they actually make rum too! And their Deep Island Hawaiian Rum called Wave was delicious. Unlike any rum I’ve ever tasted. Coconut, banana, and pineapple flavors assaulted my taste buds with the first sip. I was shocked that drinking a clear rum straight could be so amazing. So fruity and delicious. This was a cocktail, sit on the beach kind of drink.

Then it was time for the vodka. Smooth, easy, and almost a bit thick, the liquid shocked me at first. It just tasted different.

Vodka is my liquor of choice and I could easily make Ocean Vodka my go to (if only I can find it here in South Carolina).

After the tour, we wandered around the property a little bit. At the back of the farm is a large open space that overlooks Maui’s valley. You could see both sides of the island easily, while behind you, the slopes of Haleakalā disappear into the clouds. 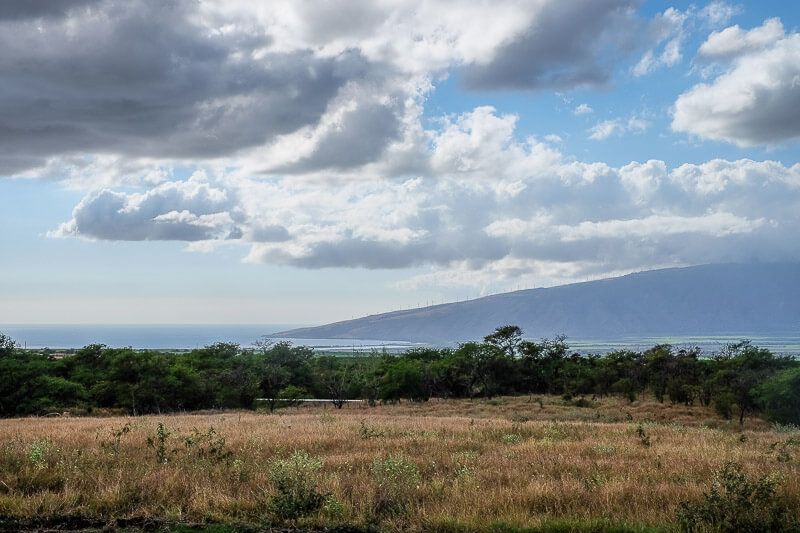 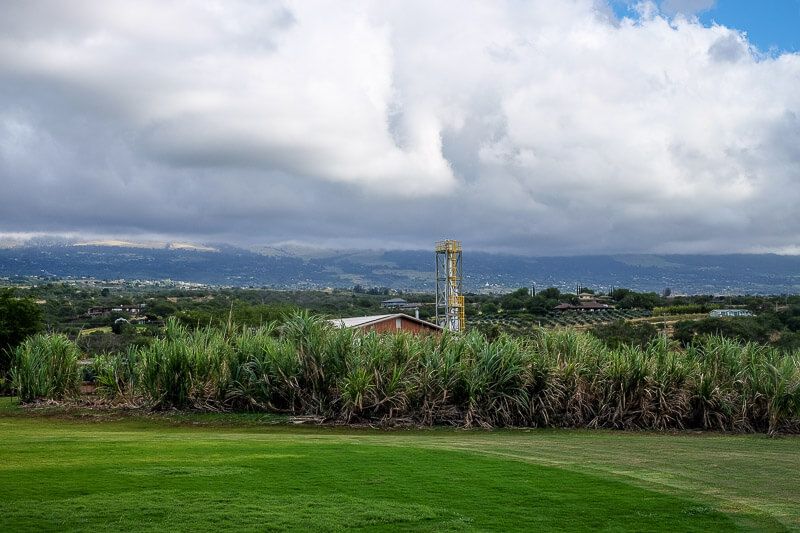 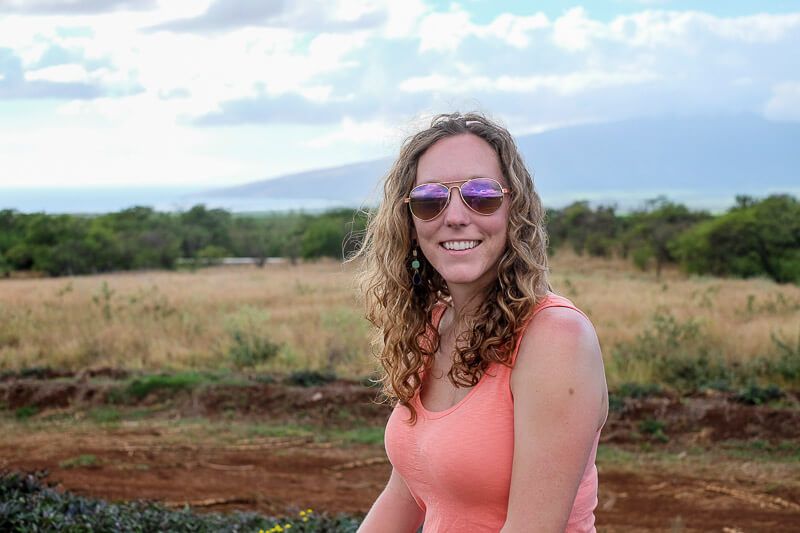 When it was time to go, I knew there was one thing I couldn’t leave without – a bottle of Ocean Vodka. Shaped into a sphere, I was already plotting on how to place and protect it in my bag. But no matter how, I was definitely bringing one home. My only regret? Not being able to fit a bottle of their Wave rum in my bag also. Sadly they only sold one (large) size of the rum and I knew a 750ml bottle of vodka was already pushing it.

So alright Maui, you got me. I came for the sea turtles and the surfing. But who knew I would fall in love with your cheese and vodka as well? 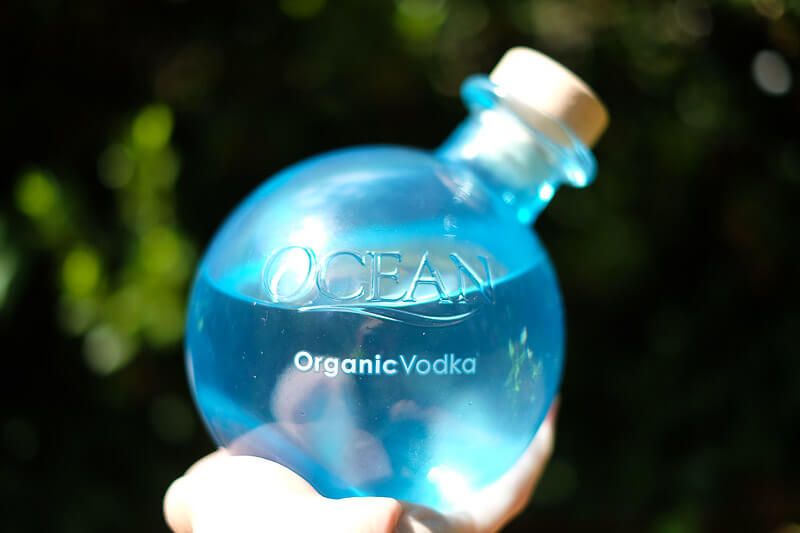 Price: $8 for kids & $12 for adults (their other tours are more expensive but they are also longer). 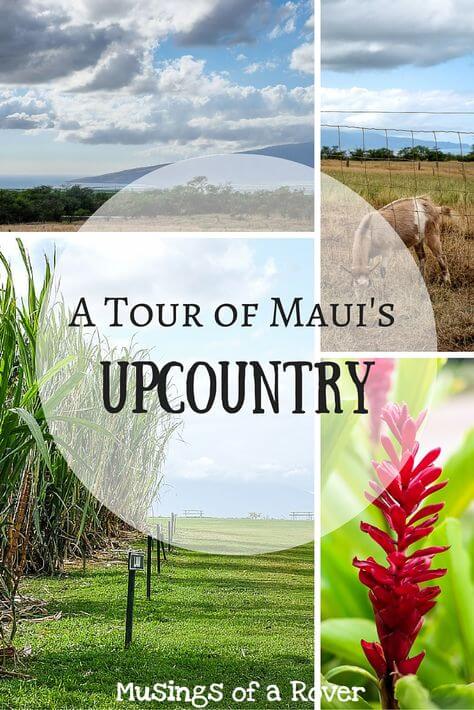 One Week in Paradise: A Maui Itinerary