“Do you have a permit?” The voice interrupted my dreams, and I jerked awake. I laid there for a beat, wondering where the question was coming from. I saw flashlight beams jumping about outside the tent. Then, before I could even think of a response, I heard two voices answer the question. It was coming from the tent next to ours. Thank god, I thought as I heard the ranger speak to the two would-be campers. Camping on Maui can be a tricky system to navigate. But it’s well worth it. 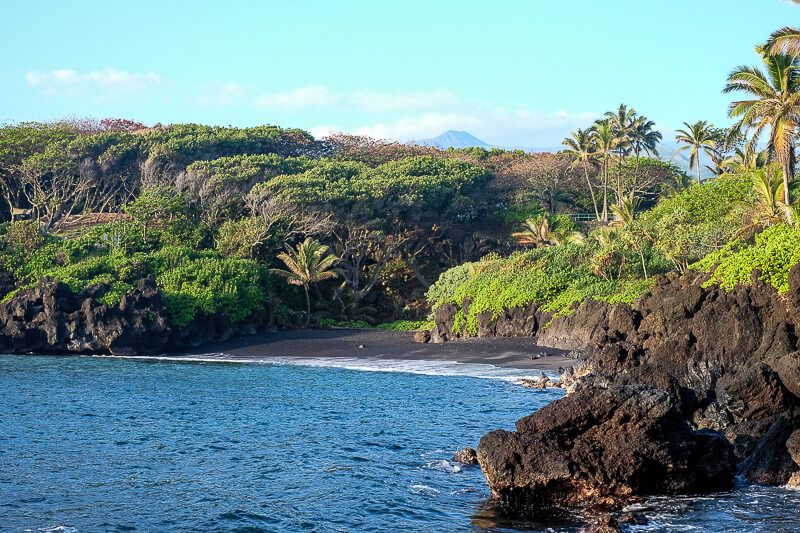 The ranger that evening was relentless. These two unlucky tourists didn’t know about the permit. They tried to buy one on the spot, but the ranger was adamant. There were signs saying you needed a permit beforehand. The next closest campsite was 45 minutes away in the Kipahulu district of Haleakala National Park. She suggested they try to make it there.

I felt Ryan shift next to me, he too was listening to the exchange going on not even six feet away. We had come prepared; we had heard about the strict rules at Waianapanapa State Park, but we were not discouraged. Camping on Maui is easy, as long as you know about the rules. In Kipahulu, it’s first come first serve. But in Waianapanapa State Park, you have to have a printed copy of your permit attached to your tent.

Not $18 to purchase one on the spot. Not a digital copy of the permit on your smartphone. But a printed copy. This is such a well known fact among the locals, that three separate people asked us if we had a paper copy when they heard we were camping at Waianapanapa. 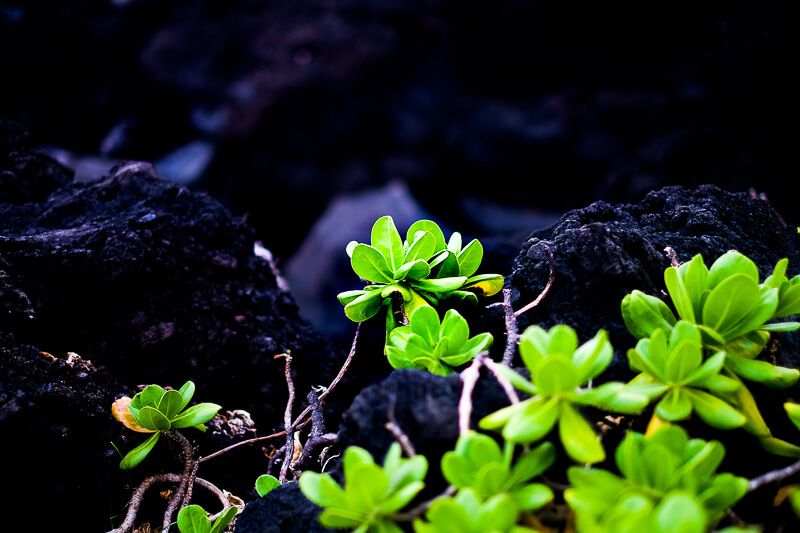 I glanced at my watch, it was not even 9pm yet. But to pack everything up and to try to get to Kipahulu (in the dark), wouldn’t be easy. The poor campers begged and pleaded, but the ranger was unsympathetic. They were sold out that night. Other campers who had paid and had a printed permit with them were still rolling into the campground. These people were taking up valuable space.

And I do mean valuable space. The campground is not very big. And if you want level ground, it’s even smaller. Two separate groups had staked up on either side of us, not even six feet away.

But the lack of privacy was a price we were willing to pay to go camping on Maui. Especially in Waianapanapa State Park. The park is located on the Road to Hana and is a very popular stop. When we rolled into the park that afternoon around 3pm, the famous black sand beach was packed. 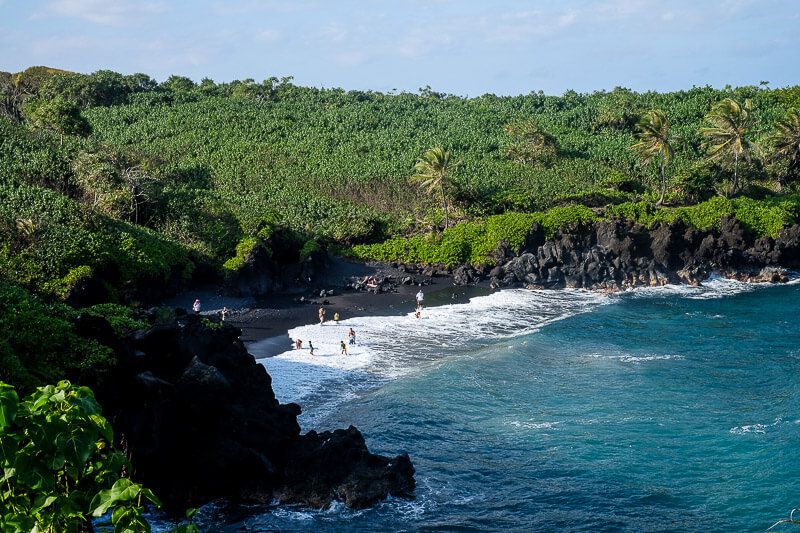 It was a sunny day and children sprinted to and from the surf. We made our way down to the beach to bask in the sun. Lonely Planet considers it the “prettiest black-sand beach on Maui.”

We lingered there for awhile, taking in the beach. I enjoyed digging my toes into the sand, watching it stick to my feet. The black sand was thicker than the sand I was used to. And the beach also just smelled different. Not like the beaches I grew up with in the Carolinas. Leaning back and closing my eyes, it smelled cleaner, crisper, cooler. And then there was the ocean itself. The water rolling in was rough and quick. Very few people ventured out further than their shins. But this didn’t surprise me. The waves pounding at the sand weren’t friendly.

The black sand beach was beautiful in a wild way. It felt like it was the one still in control. That it hadn’t yet been tamed. 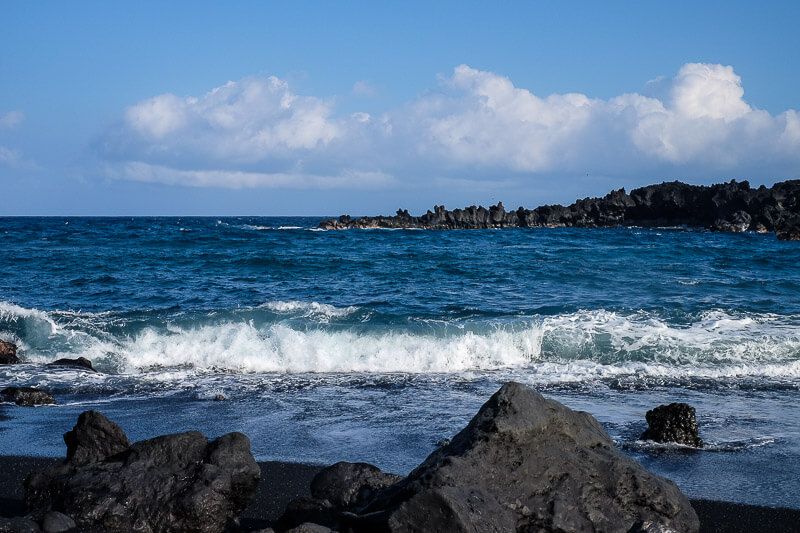 We stayed at the beach until we realized that the delicious sandwiches we had packed away for dinner had become ruined in our cooler. And so we left the beach to not only put up our tent (while it was still light out), but to also grab some dinner at a local pizza place outside of Hana.

By the time we returned to the park, most of the tourists were gone. The last bus had departed and the only people still in the park were the ones camping. We took advantage of this solitude to explore the park a bit more. The difference between the crowds swarming the beach in the afternoon and the few individuals sitting on its sand now was palpable.

Our own private black sand beach. 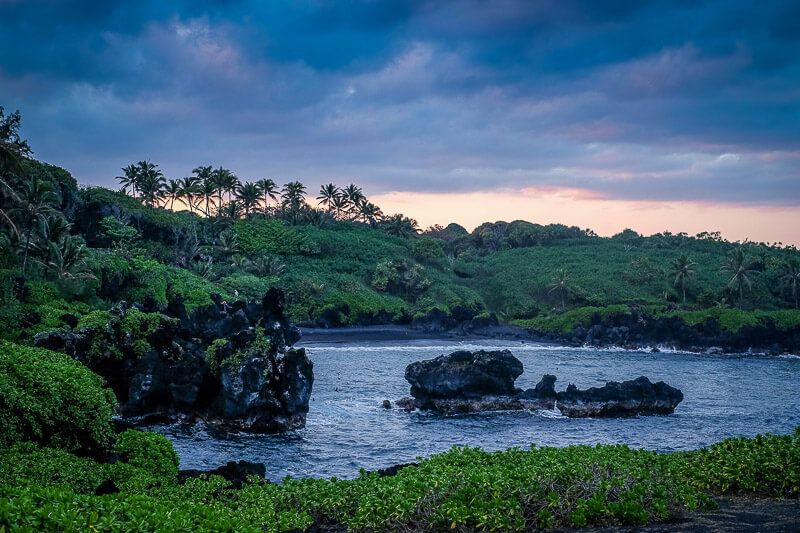 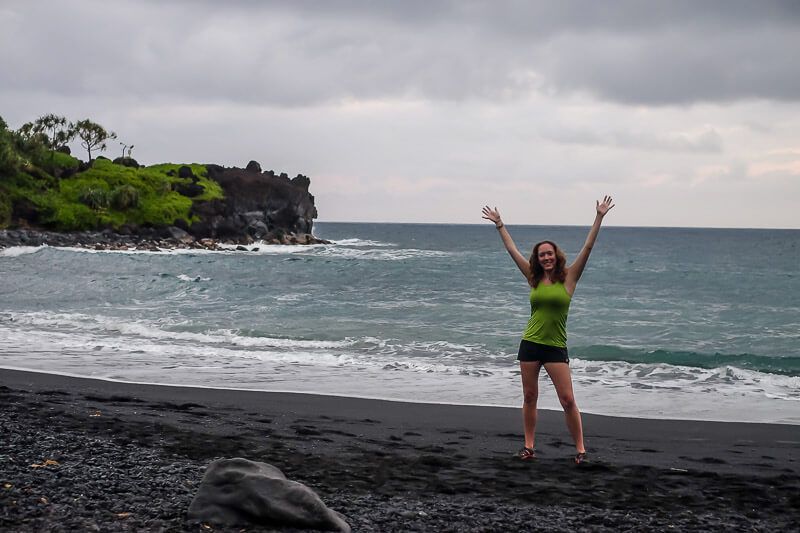 But as darkness began to settle (and with just one lone flashlight between us), I decided to just pack it in and call it a night. Camping on Maui is a lot like camping in other places. Once the sun goes down, your options become much more limited.

It was about an hour later when I heard the stern voice that woke me up. For fifteen or so minutes, the ranger and the couple talked, argued, pleaded, and begged. In the end, the ranger told them that they could wait and see. If after everyone else checked in and there was room for them, then they could stay. But she wasn’t making any promises.

I was shocked when I heard this. The guy who had rented us our camping gear told us he had seen the ranger kick out two people on bicycles during a rainstorm because they didn’t have a permit.

She must have been in a good mood that night.

Then it was our turn. Ryan rolled over and opened up the tent. He showed her our permit, and while she was still terse (questioning us on our length of stay and if it really was just the two of us), she approved us and moved on. 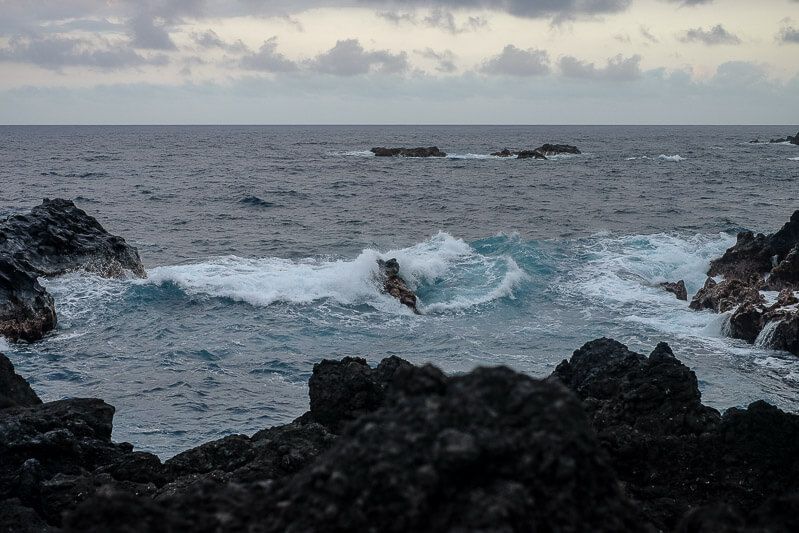 Ryan climbed back inside, and we laid there in silence for awhile. We could still hear the couple one tent over complaining about the ranger. But I didn’t feel too bad for them. We had followed the rules. Everyone else around us had followed the rules. And on a sign next to the campground there were instructions for people arriving without permits. It clearly stated that they needed to have one. It even gave the name of an internet cafe in Hana where they could buy/print out a permit.

I eventually fell back asleep as I listened to them squabble.

The next noise that woke me up was the chime of the alarm clock on my phone. I groaned as I hit snooze. I had wanted to watch the sunrise but now, as the alarm clock annoyed me, I started to wonder if it really was such a great idea.

In the end, I followed Ryan out of the tent. I noticed that very few other people were emerging from the snugness of their tents. I trudged along after Ryan and eventually squatted on some rocks to take in the sunrise.

In the end, I was glad I had forced myself awake at such an ungodly hour. Sunrises in Maui are something you have to see for yourself. It felt even more special considering there was no one else around. 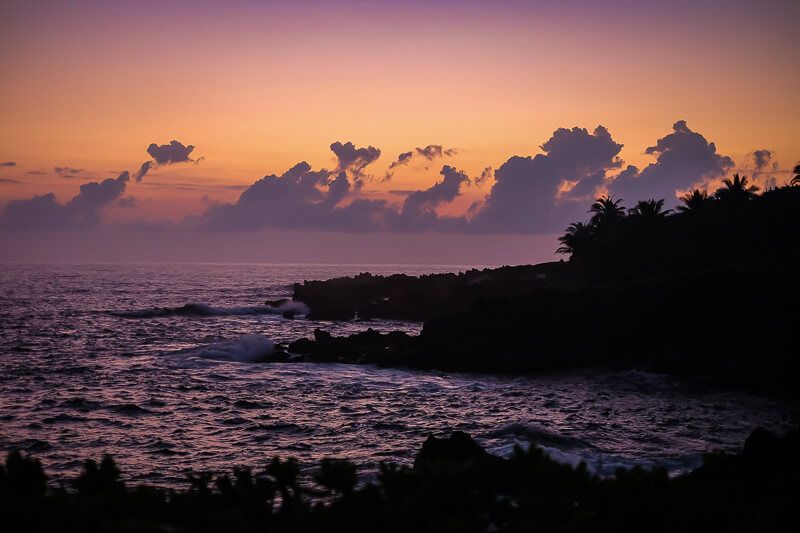 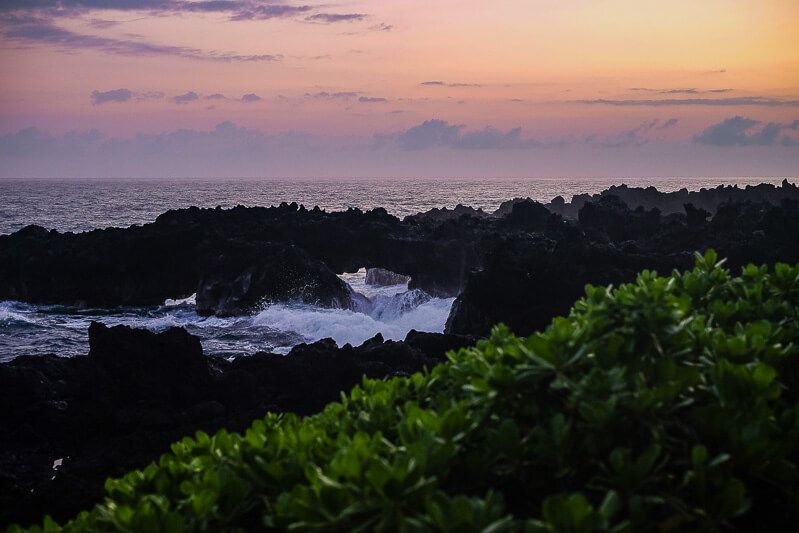 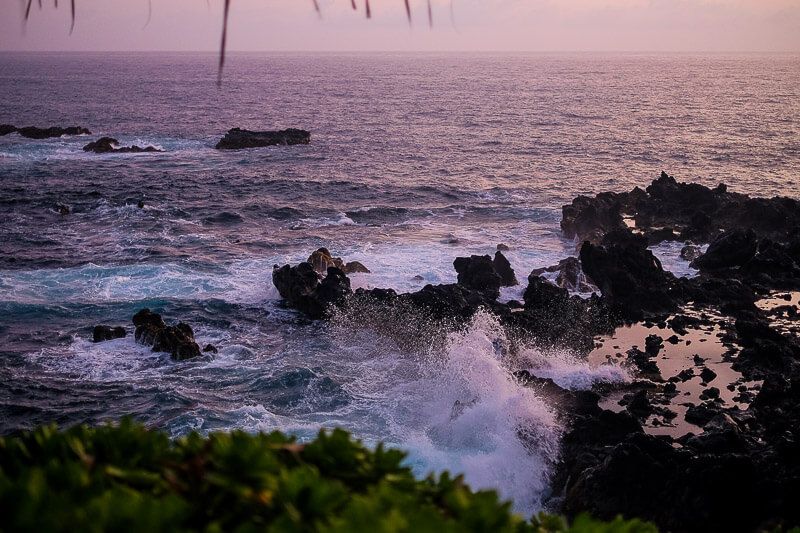 But there was one last thing we wanted to do. Before leaving Waianapanapa State Park, we hiked back to the black sand beach and up and around the trail to the northwest of it. For 15 minutes we journeyed down this trail, coming across even more secluded black sand beaches, sea arches, and a lava rock strewn landscape that melted into beautiful green hills.

I stood there for several minutes after Ryan had turned around to head back. We needed to get on the road. But I couldn’t tear my eyes away. It was so calm. So quiet. So peaceful and awe-inspiringly beautiful. I didn’t want to leave. It felt like we were the only ones on the island.

And that was what made camping on Maui worth it. 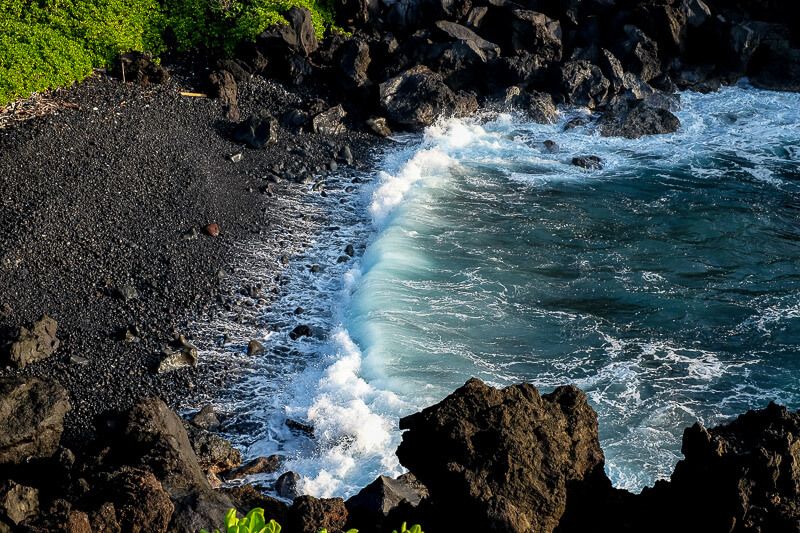 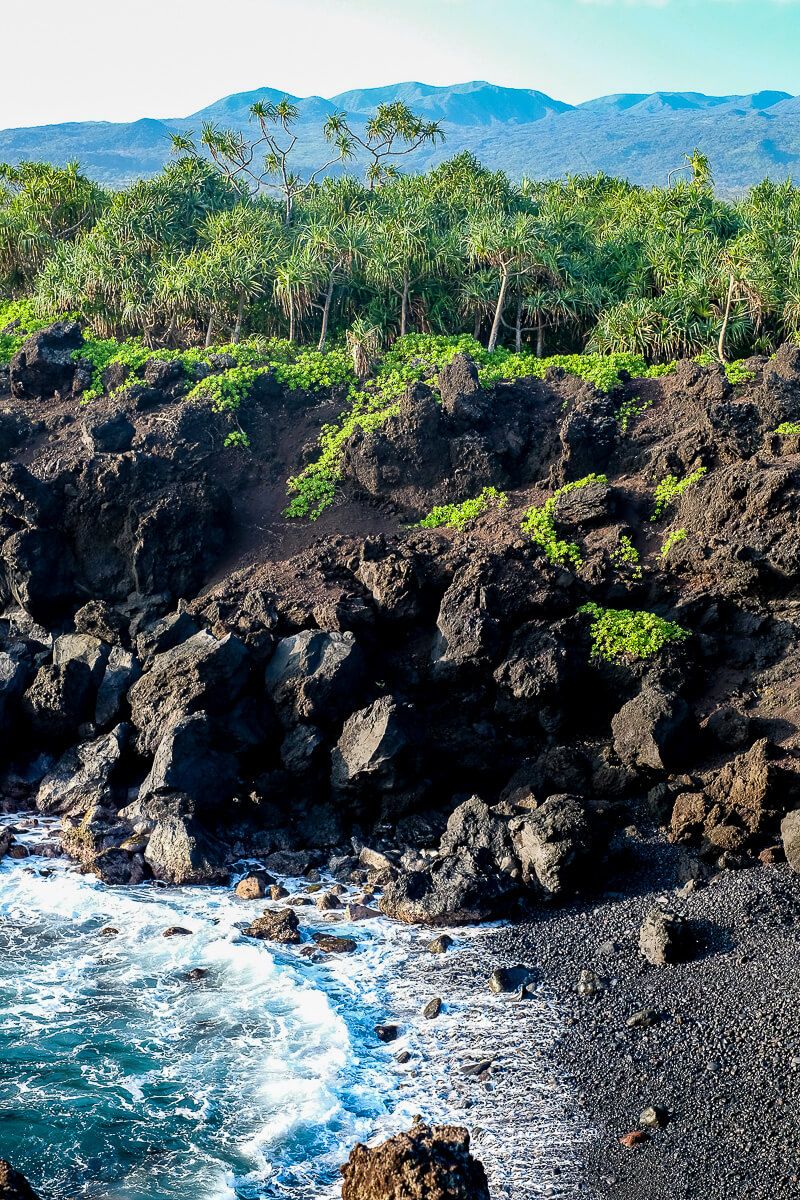 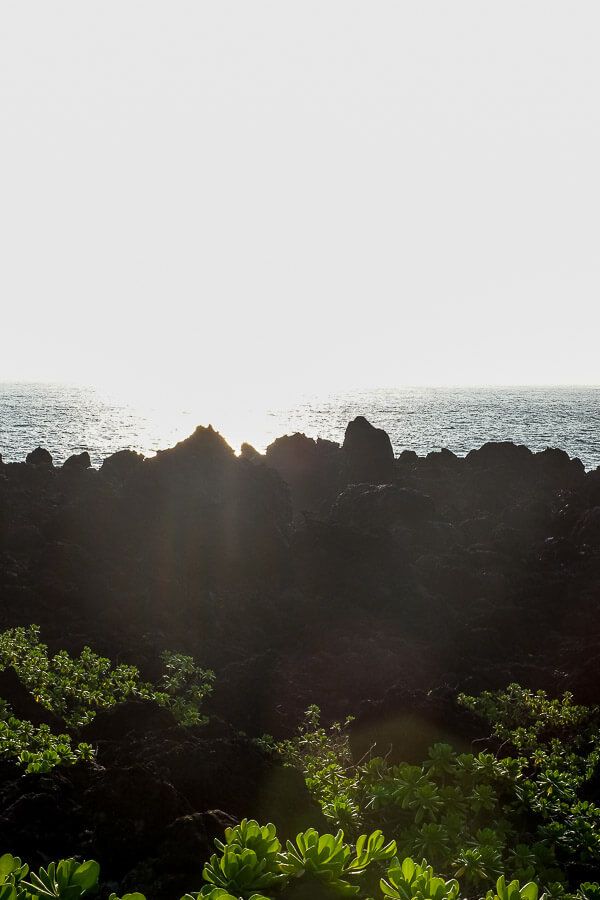 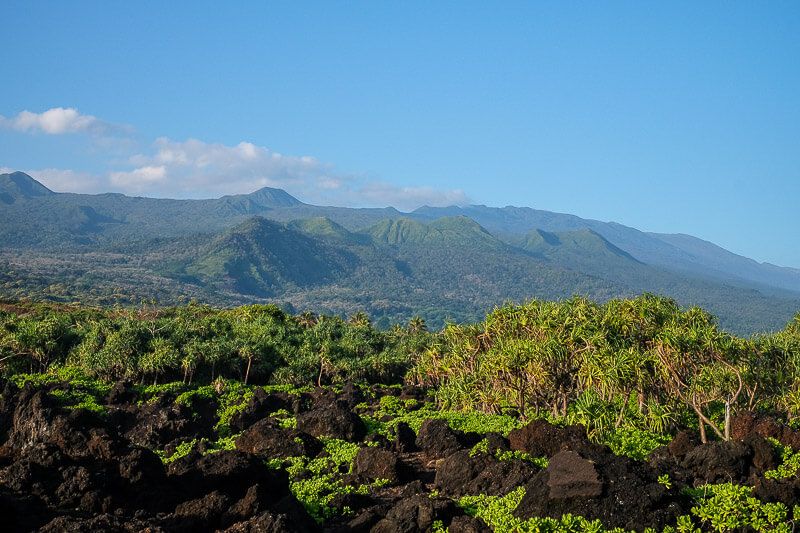 Permit. Obviously you need to have a permit to camp at Waianapanapa State Park. You can find details here.

Camping Gear. We rented camping gear from Camp Maui. Andrew was very easy going and made the rental process a breeze. If you are camping on Maui at any of the campgrounds, I would suggest renting from him.

Dinner. If you didn’t pack your cooler with food, Hana doesn’t give you a ton of options. But if you’re there on a Friday or Saturday night (like we were), then head to Hana Farms Clay Oven Pizza. It’s very close to Waianapanapa State Park and has delicious, gourmet pizzas. We got the Ziggy Stardust that was topped with starfruit and proscuitto. 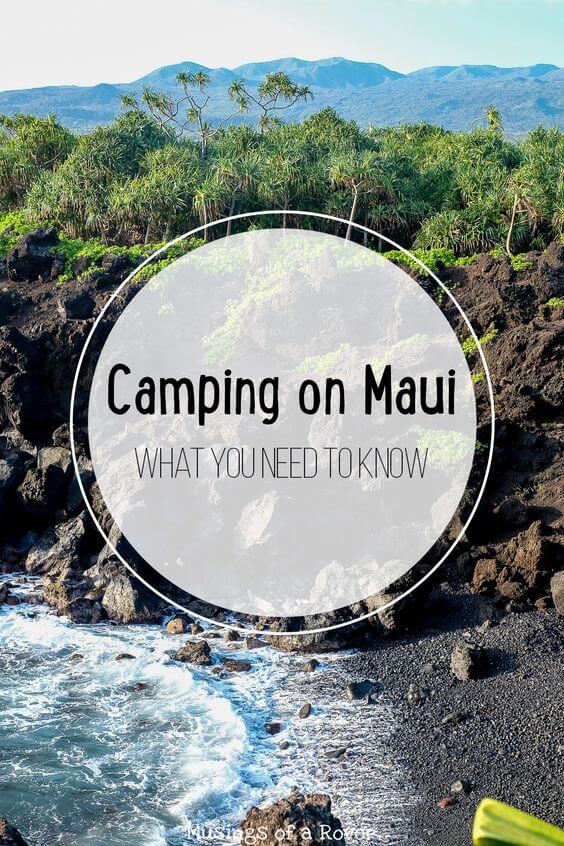 Snorkeling in Maui: My Search for Sea Turtles